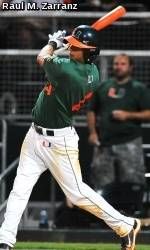 CORAL GABLES, Fla. – The ninth-ranked University of Miami baseball team won their second straight game via a walk-off hit as a Stephen Perez single in the bottom of the 11th gave the Hurricanes a 5-4 win over top-ranked Virginia Thursday night at Alex Rodriguez Park. The victory was Miami’s 18th straight at home – the team’s longest home winning streak in since 1998.

Trailing 4-2 with one out and one on in the bottom of the eighth, Scott Lawson tied the game up with a towering two-run homer down the line in right. Both teams were then held off the board the next two innings before the `Canes mounted their rally in the 11th with two outs on the board. Nathan Melendres and Michael Broad both worked deep into counts, fouling off pitches before drawing back-to-back walks. Perez then hit the first pitch he saw into right, scoring the speed Melendres to give the `Canes their eighth win in their last nine meetings with the Cavaliers (43-10, 21-7 ACC).

Lawson finished the night 1-for-3 for Miami, knocking in three runs of the `Canes five runs. In addition to his game-winning single, Perez homered for the second straight night with a solo shot in the third. Harold Martinez also finished with a pair of hits for the `Canes.

Daniel Miranda (5-2) got the win, throwing two perfect innings while striking out four to finish out the contest. Middle reliever Eric Whaley came in on relief of starter Jason Santana and turned in his best outing of the season, striking out a career-high seven while allowing just two hits in four innings of work. Santana shook off a rough first inning in which he allowed three runs, only giving up one over the next four frames.

Steven Proscia and John Barr each went 2-for-5 for the Cavaliers, while John Hicks drove in two and Jarrett Parker scored two.

Virginia struck first by plating three runs on five hits in the opening frame. Miami got one of those runs back in the bottom half of the inning as Zeke DeVoss scored from third on a sacrifice fly from Lawson.

A solo home run by Perez in the third cut the lead to 3-2.

Perez’s solo shot cut UVa’s lead to one, but the Cavaliers bounced back with a run of their own in the fifth on a sacrifice fly by Hicks.

To order tickets to the last two games of the series, visit www.hurricanesports.com or call 1-800-GO-CANES.