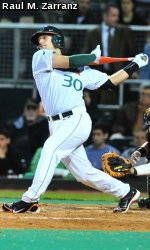 No. 9 'Canes Walk-Off Against FGCU for 17th Straight Home Win

CORAL GABLES, Fla. – The No. 9 University of Miami baseball team scored two runs in the bottom of the ninth inning, earning its 17th consecutive home victory with a come-from-behind 5-4 win over Florida Gulf Coast Tuesday at Alex Rodriguez Park.

Down one with one out in the bottom of the ninth, Zeke DeVoss worked a full count before hitting a line-drive single into left field. David Villasuso pinch hit for Stephen Perez and came through with a double of the right field wall, scoring DeVoss for the game-tying run.

A wild pitch from FGCU reliever Pete Woodworth put Villasuso on third before Frankie Ratcliff roped his third hit of the day into right field for the Hurricanes’ (38-13) fourth walk-off win of the season.

Ratcliff recorded three of Miami’s 10 hits, going 3-for-5 on the night. Yasmani Grandal reached on all four plate appearances, hitting a homer and a single while drawing a pair of walks. Nathan Melendres extended his team-best hitting streak to 10 straight, going 1-for-4.

Daniel Miranda (4-2) earned his fourth win of the year, recording the final out of the eighth inning. Starter Steven Ewing – making his first appearance in over a month – allowed just three hits and a walk while striking out two in four innings of work. E.J. Encinosa, Travis Miller, Sam Robinson and Eric Whaley all threw in relief.

Jack Wagoner started for FGCU (34-18) and allowed two runs on five hits while striking out one in four innings. Patrick Nathanson allowed one run in four innings in relief of Wagoner, but Woodward (8-2) suffered the loss, allowing the two ninth-inning runs.

Grandal put the `Canes up 1-0 in the bottom of the first, hitting a solo shot to right-center with two outs.

Ratcliff led off the third with his team-leading fifth triple of the season before Scott Lawson quickly brought him in on a grounder to second.

Perez led off the fifth with a solo shot to right, putting the `Canes up 3-0 but the Eagles rallied to take the lead over the next two innings.

Florida Gulf Coast got on the board for the first time in the sixth, plating a pair of unearned runs on grounders after a passed ball and a UM fielding error prolonged the frame.

FGCU scored another unearned run in the seventh on a bases loaded sacrifice fly to right off the bat of Mikel Alvarez, tying the game up 3-3.

The Eagles’ go-ahead run came on a throwing error in the ninth, but the `Canes rallied in bottom of the frame to secure their eighth straight win against a mid-week foe.

The Hurricanes will wrap up their regular season schedule when they play host to No. 1 Virginia in a three-game series beginning Thursday, May 20. Game times for the series against the Cavaliers at Alex Rodriguez Park are set for 7 p.m. Thursday, 7 p.m. Friday and noon Saturday.