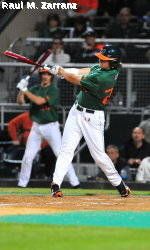 No. 5 Miami Evens Series in Atlanta With 9-2 Win

ATLANTA – The fifth-ranked University of Miami baseball team evened its series with No. 6 Georgia Tech Saturday night, recording three homers and 17 hits in a 9-2 win over the Yellow Jackets at Russ Chandler Stadium. Seven Hurricanes finished with multiple hits – including Chris Pelaez, who finished 3-for-5 with a homer, four RBI and three runs scored.

The 17 hits for the Hurricanes (37-12, 19-7 ACC) were the most recorded by Miami against an ACC team this year and just one shy of its season-high.

In addition to Pelaez’s big night at the plate, Nathan Melendres also had three hits, going 3-for-4 with a run scored. Yasmani Grandal homered for the second straight night, going 2-for-4 with two RBI, two runs scored, a double and an intentional walk. Harold Martinez also drove in a pair of runs on his team-leading 16th homer of the season. Martinez, Grandal, Zeke DeVoss, Frankie Ratcliff and Scott Lawson all finished with two hits.

In addition to Miami’s offensive exploits, lefty starter Chris Hernandez (8-2) turned in another quality start to earn his team-leading eighth win of the season. Hernandez allowed just two runs on five hits while walking four and striking out six in six innings before Sam Robinson and Daniel Miranda combined to keep Georgia Tech off the board over the final three.

Yellow Jacket starter Mark Pope (7-1) suffered his first loss of the season, allowing five runs on 11 hits while walking one and striking out three in five innings of work. Buck Farmer relieved Pope and allowed three runs in two innings before Jake Davies and Zach Brewster went the rest of the way. Chase Burnett drove in both of Georgia Tech’s runs on a two-run homer.

The first five batters of Miami’s second inning hit safely as the `Canes jumped out to a 3-0 lead. Pelaez led off the frame with a single to center before Martinez sent the first pitch he saw over the wall in left to put UM up. Back-to-back singles by Melendres and Michael Broad then put runners on the corners for DeVoss, who singled home Melendres to give the `Canes a three-run advantage.

Lawson doubled to left-center to lead off the third and scored two batters later on Pelaez’s second single to center, putting Miami up 4-0.

Georgia Tech finally got on the board in the fourth, cutting Miami’s lead to 4-2 on Burnett’s homer.

The `Canes got one of those runs back the next half inning when Stephen Perez scored from third on a Grandal two-out double to right.

Miami broke the game open in the seventh, going up 8-2 on the three-run blast to right by Pelaez, immediately following an intentional walk by Grandal.

Grandal’s second homer of the series – a solo shot to right-center – gave UM’s its ninth run in the top of the ninth.

Right-hander David Gutierrez (5-0, 3.86 ERA) will start for Miami on Sunday while Georgia Tech will counter with lefty Jed Bradley (8-2, 3.75 ERA). The game will be televised live on CSS.