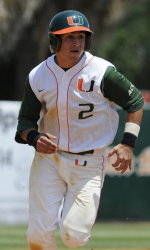 CORAL GABLES, Fla. – The 13th-ranked University of Miami baseball team won in thrilling fashion over No. 21 North Carolina on Sunday, scoring three runs in the bottom of the eighth in a curfew-shortened game to pick up an 8-7 win at Alex Rodriguez Park. The win secured Miami’s first ever series sweep over the Tar Heels since the `Canes joined the ACC in 2005.

Down 7-5 heading into the bottom of the eighth, the Hurricanes (27-9, 14-4 ACC) knew it would be their last chance to come back due to the Atlantic Coast Conference’s curfew rule that wouldn’t allow for another inning to start.

Zeke DeVoss quickly made it 7-6 with a solo homer to lead off the inning. Back-to-back walks by Frankie Ratcliff and Scott Lawson put runners on first and second, with still no outs on the board. Yasmani Grandal – who already had two hits and four RBI on the day – then singled up the middle in center to load the bases. Harold Martinez grounded into a double play, but moved Lawson to third and scored Ratcliff to tie it up at 7-7. Michael Broad, who had come on a pinch-runner in the seventh, then came to the plate with Lawson waiting on third. But the first pitch by reliever Nate Striz was thrown in the dirt and got away from catcher Jesse Wierzbicki, allowing Lawson to score easily to give the `Canes their second win this year on walk-off wild pitch.

The game started over an hour late due to inclement weather in the area and on a few occasions was stopped for field maintenance as rain fell on and off last in the game. No inning could start after 5:15 p.m., a time that passed in the bottom of the eighth during Miami’s rally.

After UNC (22-16, 6-11 ACC) took a 7-5 lead in the top of the fifth, Miami’s bullpen kept the game close, tossing four shut-out innings to give the offense a chance in the eighth. Daniel Miranda (3-1) earned the win, tossing two shut-out innings in the seventh and eighth. E.J. Encinosa, Sam Robinson and Eric Whaley kept the Tar Heels off the board in two combined innings after starter Jason Santana allowed seven runs – five earned – in four innings.

Grandal lead the `Canes at the plate, going 3-for-4 with four RBI. UM’s first three batters in the line-up – DeVoss, Ratcliff and Lawson – combined to collect six hits and score seven runs – including the final three in the eighth.

A two-run double by Grandal in the bottom of the first put UM up early on, but UNC scored three in the second and two more in the third to take a 5-2 lead.

The Hurricanes tied things up in the bottom of the fourth however, scoring their third run on Ryan Perry’s second homer of the weekend on a deep blast to left. A bases-loaded single to center by Grandal later in the frame scored two more, but the lead was short-lived however as back-to-back as the Tar Heels put two more up in the fifth on an RBI double and an RBI single.

From there, both teams were held off the board until the `Canes big rally in the eighth.

The Hurricanes will return to Alex Rodriguez Park on Tuesday for a mid-week game against Bethune-Cookman at 6 p.m.

Series Notes
– The series win for Miami was its fifth in its first six Atlantic Coast Conference series of the 2010 season.
– The win secured Miami’s first ever series sweep over the Tar Heels since the `Canes joined the ACC in 2005.
– Zeke DeVoss led UM offensively on the weekend, going 6-for-11 with two homers, three RBI, three stolen bases and six runs scored in the series.
– Ryan Perry hit his first two homers of the season against the Tar Heels hitting what proved to be the game-winner on Saturday before blasting a deep solo homer on Sunday.
– Harold Martinez also hit two homers to increase his team-leading home run total to 11.
– Yasmani Grandal went 5-for-10 with a homer and a team-high seven RBI in the series. Grandal has now recorded multiple hits in 12 of Miami’s last 16 games and has 29 RBI over UM’s last 15 games
– Miami’s bullpen did not allow an earned run all weekend in a combined 17 innings of work.
– Daniel Miranda tossed four scoreless in two appearances against UNC, recording a save on Friday and a win on Sunday.