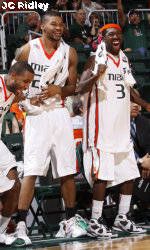 CORAL GABLES, FLA. – The University of Miami men’s basketball team, staff, family and supporters gathered at the BankUnited Center on Wednesday evening to honor the team’s graduating seniors and celebrate the 2009-10 season at its annual postseason banquet.

The evening’s program included dinner, player introductions, a question and answer session with the three seniors – Dwayne Collins, James Dews and Cyrus McGowan – and Coach Haith and a season highlight film, in addition to the presentation of team awards. The recipients of the Most Valuable Player, Most Improved Player, Ultimate Teammate, Most Outstanding Defender and the Hustlin’ Cane awards were decided by a vote of team members.

Collins and Dews shared honors as co-Most Valuable Player, while Collins also earned distinction for Most Blocked Shots and Chairman of the Boards (top rebounder) for the second-straight season. Dews also earned the team’s vote for the Hustlin’ Cane Award, recognizing his strong work ethic and consistent efforts towards excellence.

Redshirt freshman Reggie Johnson, who was an ACC All-Tournament Second Team pick, was named Most Improved Player and was also recognized with the Best Free Throw Percentage – uncommon for a 6-10 center.

Adrian Thomas, the 2009 Most Improved Player, was named Ultimate Teammate by his fellow basketball players and also posted the team’s – and the ACC’s – Best Three-Point Field Goal Percentage.

DeQuan Jones, who turned in three outstanding performances during Miami’s ACC Tournament run, was presented with the Unsung Hero Award by the University of Miami Hall of Fame. Fellow sophomore Julian Gamble was honored with the Outstanding Student-Athlete Award for his efforts on the court and in the classroom.

Freshman Donnavan Kirk earned the first annual Iron Man Award. Given by strength & conditioning coach Mac Calloway, the award recognizes the men’s basketball player who has exhibited dedication in the classroom, locker room and weight room. Over the course of the last eight months, Kirk has increased his bench press by 30 pounds, his squats by 125 pounds and his vertical jump by two inches, while he can reach a team-high 12 feet.