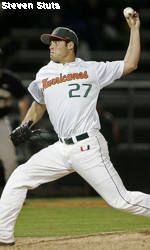 CORAL GABLES, Fla. – The 15th-ranked University of Miami baseball team saw every player reach base, including five different players who recorded an RBI, as the Hurricanes took game one over Wake Forest, 7-4, Friday night at Alex Rodriguez Park.

Miami (18-7, 8-2 ACC) ran out to a 5-1 lead and eventually held on for its eighth win in its last nine conference games. The win was also the Hurricanes’ seventh straight over the Demon Deacons, dating back to 2007.

Chris Hernandez improved to 4-2 with the win, going seven innings while giving up just one earned run and striking out seven. Michael Dimock dropped to 1-5 with the loss for Wake Forest, who dropped their fourth straight ACC series opener. Eric Whaley and David Gutierrez each tossed an inning in relief of Hernandez.

Stephen Perez led the `Canes with two RBI on 2-for-4 hitting. Yasmani Grandal who was fifth in the ACC with a .411 batting average coming in, went 2-for-5 on the night to notch his fifth straight game with multiple hits. Grandal has now hit safely in 14 of his last 23 at-bats. Chris Peleaz also had another big night at the plate, going 2-for-3 with a homer and his first triple as a `Cane.

The Hurricanes got the scoring started in the bottom of the second inning after Wake Forest (9-19, 2-8 ACC) mishandled a Nathan Melendres ground ball, allowing Pelaez to score from third.

The Hurricanes added two more in the bottom of the third on a RBI double by Perez and a Grandal RBI single.

The Deacons responded with a run in the top of the fourth on an RBI double by Carlos Lopez.

Pelaez smacked his fifth home run of the year in the fourth while Frankie Ratcliff hit an RBI triple, his team-leading fourth of the year.

Wake Forest again closed the gap on a two RBI single by Mike Murray to make it 5-3.

Miami stretched their lead by adding one run in the bottom of the fifth and another in the sixth on a sacrifice fly by Harold Martinez and then the second double of the night by Perez.

Wake Forest attempted to rally in the top of the ninth, but came up short as Gutierrez forced a ground out to end the game.

Game two of the three game series is slated for Saturday night at 7 p.m. Lefty Eric Erickson (2-1, 3.34 ERA) will take the mound for the `Canes while Wake Forest will counter with lefty Tim Cooney (3-1, 2.97 ERA). The game will be televised live on CSS.