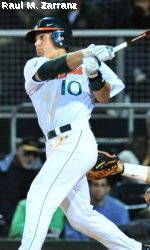 RALEIGH, N.C. – The 12th-ranked University of Miami baseball team won its sixth straight Atlantic Coast Conference game with a 6-5 win over NC State Friday night at Doak Field at Dail Park. Miami plated runs in each of the first five innings and eventually held on for the one-run win on a cold night on NC State’s campus.

Up 6-4 heading into the bottom of the ninth, Miami (15-6, 6-1 ACC) was able to get out of trouble after the Wolfpack loaded the bases with one out. After UM closer David Gutierrez walked in a run to make it 6-5, he proceeded to strike out pinch-hitter Tarran Senay before inducing a fly out to left, securing the victory in the series opener over the Wolfpack.

Miami starter Chris Hernandez (3-2) earned the win, allowing four runs on seven hits while walking four and striking out six in five innings of work. For Hernandez – it was his third straight win to open conference play.

Reliever Daniel Miranda turned in the best outing of his young career, allowing just one hit while striking out a career-high seven in three innings of work before Gutierrez came on in the ninth to earn his fifth save in five tries. UM’s bullpen has now allowed just one earned run in 22 1/3 innings in league play.

Nathan Melendres and Yasmani Grandal each had three hits for the Hurricanes. Melendres had a pair of RBI singles early in the game while Grandal had an RBI single in third and a double late. Stephen Perez also had a big night at the plate, going 2-for-3 with a walk and three runs scored. Chris Pelaez also had a single, a sacrifice fly and two runs scored.

Jake Buchanan (3-2) suffered the loss for NC State, allowing six runs on eight hits while walking two and striking out five in 4 1/3 innings before Grant Sasser tossed 4 1/3 scoreless in relief and Rob Chamra recorded the final out of the top of the ninth.

The `Canes jumped out to an early 1-0 lead when Perez smacked a solo homer to right-center in the top half of the first.

NC State tied it right back up in the bottom of the first, when Drew Poulk drove in his cousin Dallas with a double down the line in left.

Melendres hit a two-out bloop single to right in the second to bring home Pelaez from second to put UM back on top, 2-1.

For the third straight inning, UM plated a single run to take a 3-1 advantage in the third. After Perez walked and stole second, Grandal smacked a single up the middle to easily score Perez.

In a near repeat of two innings prior, Melendres singled home Pelaez from second in the top of the fourth to move the Hurricanes’ lead to 4-1.

A fielder’s choice grounder with runners on second and third with one out in the fourth scored Harold Riggins for NC State’s second run in the bottom of the fourth.

After a walk by Perez and a pair of singles by Scott Lawson and Grandal loaded the bases with no outs in the fifth, back-to-back sacrifice flies to center by Harold Martinez and Pelaez put the `Canes up 6-2 in the fifth.

A two-run double to right-center by Riggins with two outs in the bottom half of the fifth however pulled NC State to within two, 6-4.

The score remained 6-4 until the bottom of the ninth, when a pair of UM errors and a pair of NC State hits started the late rally that fell just short for the Wolfpack.

Game two of the three-game series is slated for 6:30 p.m. Saturday night. Right-hander Jason Santana will take the mound for the `Canes while NC State will counter with righty Cory Mazzoni.