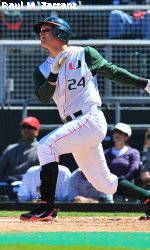 DURHAM, N.C. – With the score tied at six with two outs in the top of the ninth, Yasmani Grandal smacked a RBI double to right to give the 11th-ranked University of Miami baseball team a 7-6 win Sunday and a series sweep over Duke at the Durham Bulls Athletic Park.

Frankie Ratcliff started the rally in the ninth, singling up the middle to lead off the inning. Stephen Perez proceeded to move him to second on a sacrifice bunt and after a Scott Lawson strikeout, Grandal hit the double down the line in right to bring Ratcliff home.

Ratcliff had the best day at the plate for the `Canes, finishing a single short of the cycle in a 3-for-5 performance. Ratcliff scored three of Miami’s seven runs on the day. Michael Broad, Stephen Perez and Nathan Melendres all finished with two hits. Melendres drove in a pair of runs while Broad scored two.

The `Canes improved to 14-5 overall and 5-1 in Atlantic Coast Conference play with the win while the Blue Devils dropped to 12-7 and 2-4 in league play.

Left-hander Eric Erickson allowed six runs – only three of which were earned however – on seven hits while striking out three in five innings. Eric Whaley came on in relief of Erickson and tossed 2 2/3 scoreless while allowing just one hit. Sam Robinson (1-0) got the final batter of the eighth out and earned his first win before David Gutierrez tossed a scoreless ninth to earn his fourth save of the year.

UM went up 1-0 in the third when, after reaching second on a single and a wild pitch, Michael Broad came around to score on a bunt single by Melendres followed by a throwing error by third baseman Eric Brady.

The Blue Devils tied it up in the bottom of the third with a Brady sacrifice fly to right that scored Joe Pedevillano.

Duke took its first lead in the fourth, scoring four runs to go up 2-1. After Gould doubled to lead off the inning and advanced to third on a grounder, he was brought in by a Brian Litwin RBI single through the left side to give the Blue Devils the lead. From there, a fielder’s choice grounder followed by an error by Grandal allowed two runners to score before a sacrifice bunt scored the fourth run of the frame.

Miami responded quickly however, scoring three runs in the fifth on four hits. Broad led off with an infield single and after stealing second, scored on a Melendres double off the “Blue Monster” in left-center. Two batters later, Ratcliff’s homer to left brought Miami to within one, 5-4.

Back-to-back doubles to left by Gould and O’Grady with two outs in the fifth put the Blue Devils back up by two.

With runners on second and third with one out in UM’s sixth, Melendres brought home Harold Martinez for the Hurricanes’ fifth run with a sacrifice fly to right.

Ratcliff led off the third with a triple to center and immediately scored the tying run on a double by Perez off the wall in left. Lawson followed that up with a single to left, putting runners on the corners with no outs.

Duke put runners on first and second with one out in the ninth but Gutierrez was able to induce a 1-6-3 double play to secure the sweep.

The `Canes will return home for a mid-week game against UCF on Tuesday, March 23 at 6 p.m. at Alex Rodriguez Park before returning to North Carolina to take on NC State next weekend, March 26-28 at Doak Field.