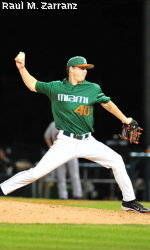 CORAL GABLES, Fla. – With the score tied at eight with two outs in the bottom of the ninth, Frankie Ratcliff came home on a wild pitch by Fordham closer Brando Casalicchio to give the 11th-ranked Hurricanes a 9-8 win over the Rams Wednesday night at Alex Rodriguez Park.

Ratcliff – who finished the night 2-for-5 with three runs scored – singled to center with one out in the bottom of the ninth to get the inning going for the `Canes. After stealing second, Ratcliff then advanced to third on a grounder to first by Stephen Perez. Then with two outs in the inning and a 1-2 count on Yasmani Grandal, Ratcliff broke home on Casalicchio’s wild pitch, scoring easily to give the `Canes the one-run victory.

After the Rams took an 8-3 lead with a five-run seventh, Miami (11-5) quickly responded with five runs of its own in the bottom of the frame. The scored remained tied at eight over two innings until Ratcliff scored the game-winner in the end.

Eric Whaley (3-0) earned his team-leading third win of the season, walking two and striking out four in two scoreless. Making his first career start, UM starter Jerad Grundy allowed three runs – only one of which was earned – on five hits while walking four in four innings of work.

Six Hurricanes finished with multiple hits on the night as UM recorded 15 hits as team – the second-highest total on the year. Zeke DeVoss led the attack, going 3-for- 5 with a run scored while Perez, Chris Pelaez, Michael Broad and Harold Martinez joined DeVoss and Ratcliff with multiple hits. Martinez had three of the team’s six RBI on the night, while Broad scored twice.

Fordham starter John Flanagan lasted four innings, allowing two earned runs on seven hits while walking two and striking out two before giving way to Ryan DeMartino. DeMartino, Daniel Munday and Jordan Grangard tossed the next 3 1/3 and gave up a combined five runs, before Casalicchio (0-1) lost it in the ninth.

Fordham (4-11) jumped out to a 1-0 lead in the top of the first. After the first two batters of the game were retired, a Mike Mobbs’ double and a Chris Walker infield single put runners on the corners before a wild pitch by Grundy brought Mobbs in for the first run of the contest.

Just as it did on Tuesday, the `Canes immediately responded with runs in the bottom of the first to take a 3-1 lead. With the bases loaded and two outs, Martinez singled to left-center, scoring two before the third run came across on a throwing error by shortstop Brian Kownacki allowed another run to score on the play.

The Rams tied it back up in the second with on a RBI double by Alex Kenny followed by a RBI single by P.J. Como.

After all of the early scoring, both teams were held off the board until the seventh when the Rams put five runs up to take an 8-3 lead. After P.J. Como hit a bloop single and moved to second on a grounder to second, Mobbs smacked a double to left-center to score Como and put Fordham back ahead by one. After Mobbs moved to third on a wild pitch, an infield single to third brought home the second run of the inning before a two-run double to right by Angelo Ponte made it 7-4. The fifth run of the frame finally came across on a RBI single to right by Kownacki.

Miami got all five runs back in the bottom of the frame to send the game tied into the eighth. An RBI ground out by Martinez started the scoring, followed a sacrifice fly to right by Melendres to bring the score to 8-5. A double to right by DeVoss then scored the third run of the inning immediately before an error brought in the `Canes seventh run. Moments later, Perez drove in the tying run with a double to left that scored Ratcliff.

Miami will now make its first weekend road trip of the 2010 campaign when it travels to Durham, N.C. to take Duke at the Durham Bulls Athletic Park, Friday, March 19 to Sunday, March 21.