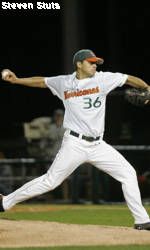 CORAL GABLES, Fla. – Senior right-hander Jason Santana allowed just one run while striking out a career-high eight in six innings of work as the 13th-ranked University of Miami baseball team evened its series with Boston College with a 7-1 victory Saturday night at Alex Rodriguez Park at Mark Light Field.

Santana (1-1), making his second straight Saturday start, allowed just the one early run and settled in, allowing five hits and two walks on the night to earn his first victory of the 2010 campaign.

The Hurricanes’ offense – held scoreless for the first time this season Friday night – finally got on the board in the second with a pair of runs. Three innings later, the `Canes scored four in the fifth and eventually added a late run to secure the win.

Michael Broad and Frankie Ratcliff both finished 2-for-3 with two RBI and two runs scored. Broad, who put Miami ahead for the first time in the series with a two-run double in the second, also smacked his first career homer with a solo shot in the eighth.

BC starter Kevin Moran (1-2) suffered the loss, allowing six runs on seven hits while walking five and striking out two in four innings of work. Robbie Anston was the lone Eagle with multiple hits, going 2-for-4 with a run scored.

For the second straight night, the Eagles got on the board first with a run in the top half of the first. Anston led off the game with a single and after back-to-back ground outs moved him to third, a single by Anthony Melchionda brought him across for the game’s first run.

The Hurricanes finally got to BC’s pitching in the bottom of the second, scoring a pair of runs to take a 2-1 lead. After Ratcliff singled and stole second, Broad doubled to right-center to put UM on the board for the first time in the series. From there, Nathan Melendres walked to put runners on first and second for Zeke DeVoss, who singled through left side to bring Broad home.

Miami’s four-run fifth was highlighted by a two-run double to deep center by Ratcliff. Yasmani Grandal led off the rally with a double to right-center. Back-to-back walks by Scott Lawson and Harold Martinez set up Ratcliff’s double, putting UM up 4-1. Two batters later, a fielder’s choice grounder by Melendres scored UM’s fifth run of the contest before a sacrifice fly by DeVoss plated UM’s fourth and final run of the frame.

Broad’s solo shot in the eighth closed the scoring at 7-1.

The Hurricanes and Eagles will decide the series Sunday at 1 p.m. when Miami left-hander Eric Erickson takes the mound against BC’s right-hander Mike Dennhardt.