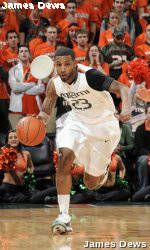 CORAL GABLES, FLA. – The University of Miami men’s basketball team hosts in-state rival Florida State in the 2009-10 regular-season finale at the BankUnited Center on Sat., Mar. 6, at Noon in a nationally-televised game on ESPN2. Miami’s three seniors — Dwayne Collins, James Dews and Cyrus McGowan — will be honored before the game.

With a career-high eight assists at North Carolina by redshirt-sophomore Malcolm Grant, Miami’s rookie backcourt of Grant (104) and Durand Scott (103) have become the first UM duo since 1992-93 to collect 100 assists in the same season and the fourth pair of teammates to do so in UM history.

With 103 assists this season, Scott became the first Hurricane freshman in 15 years — since Kevin Norris posted 102 assists in 1994-95 — and the fifth UM freshman to top the century mark in assists. He is the first Hurricane of any class to achieve this since Anthony Harris registered 133 assists as a sophomore in 2004-05.

Grant has dished out 18 assists — with just six turnovers — over the last four games for a 3:1 assist/turnover ratio.

Among the best to ever wear the Orange and Green, All-American Tim James (1995-99) followed up a professional basketball career by electing to serve his country. A first-round draft pick by the Miami Heat in 1999, James is currently in the midst of a 12-month deployment in Iraq with the U.S. Army. Hurricane fans can show their support for James on Saturday by signing a special banner located near the main doors of the BankUnited Center that will be sent to him.

Durand Scott is the only ACC freshman that ranks among the league’s top five freshmen in scoring (3rd), rebounding (tied for 5th with 6-10 John Henson) and assists (1st). In addition, Scott is the only freshman in the league to have at least one game with 10 points, five rebounds and five assists — having done so twice this season to tie for eighth-best among all ACC players.

Scott is among just three ACC freshman averaging double-figure points versus conference opponents and ranks second among all ACC freshmen with 11.0 points per game versus the ACC. (Georgia Tech’s Derrick Favors is first with 11.4 ppg vs. ACC and Maryland’s Jordan Williams is third with 10.3 ppg vs. ACC). Over all games this season, he is third among ACC freshmen with 9.7 points per outing.

Scott’s 29 points at North Carolina is the second-most points by an ACC freshmen this year and is the most points scored by a Hurricane since Jack McClinton’s 35 points versus North Carolina on Feb. 15, 2009. In addition, he is the first Miami freshman since Guillermo Diaz in 2003-04 to score 20 points in multiple games in his rookie campaign. It is the most points by a Miami freshman in over nine years — since Darius Rice scored 31 points versus Virginia Tech on Jan. 10, 2001.

Florida State leads the all-time series versus Miami, 35-28, with the teams splitting the series last season as each program won at home. The Seminoles defeated the Hurricanes, 71-65, in their last meeting on Feb. 6, 2010, in Tallahassee behind a career-high 19 points from reserve Luke Loucks — including hitting three three-pointers, while James Dews finished with a team-high 15 points — including a 3-of-5 effort from beyond the arc.

The Seminoles, who enter Saturday’s game in a three-way tie for third place in the ACC, are vying for a first-round bye in next week’s ACC Tournament.

FSU leads the nation in field goal percent defense, limited opponents to just 37.0 percent from the field, while ranking ninth with 6.5 blocked shots per game — including a team-leading 2.4 from 7-1 center Solomon Alabi, who ranks 26th in the nation. He is also the also among the league’s leaders in free throw percentage, converting 80.2 percent from the line — although Miami’s Reggie Johnson is the ACC’s top big man from the charity stripe versus ACC opponents (80.9 percent).

Chris Singleton leads the ACC and ranks 21st in the nation with 2.3 steals per game.

Freshman guard Antoine Allen was named to the 2010 ACC All-Academic Men’s Basketball Team. A broadcast journalism major, the Baltimore-native is the eighth Hurricane to earn ACC All-Academic Team recognition since 2006. Miami trails only Duke, who has had nine players named to the academic team over that span.