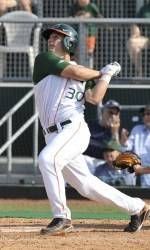 CORAL GABLES, Fla. – Trailing 7-6 with two on and two out in the bottom of the ninth, freshman centerfielder Zeke DeVoss smacked a three-run, walk-off homer to propel No. 12 Miami to a 9-7 victory Sunday afternoon over Rutgers at Alex Rodriguez Park.

Down two with one out in the bottom of the ninth, junior leftfielder Chris Pelaez started the rally with single to center of Rutgers reliever Charlie Law. After a wild pitch moved Pelaez over to second, Harold Martinez flew out to right for the second out of the inning but was able advance Pelaez over to third. With no more room for error, Frankie Ratcliff kept the rally alive with a walk, putting runners on the corner with two outs. Nathan Melendres followed with a hard grounder to third that got through third baseman Russ Hopkins, allowing Ratcliff to move to third and Melendres to second. Down a run at this point, DeVoss – UM’s No. 9 hitter – smacked a outside fastball on a one-and-one count over the wall in left to give the `Canes the two-run win.

The win for Miami (3-0) secured the series sweep of the Scarlet Knights (0-3) in both team’s 2010 season-opening weekend series.

Pelaez, who went 8-for-11 on the weekend in his first action as a Hurricane, finished the day 4-for-5 with a homer, a double, two singles, two runs scored and a run batted in. David Villasuso, who got his first start at catcher this season, went 2-for-5 with two homers and three RBI.

Closer David Gutierrez (1-0) earned the win, tossing a scoreless inning in relief a night after striking out the side for his first save. Starter Jason Santana did not factor in the decision, allowing four earned runs on six hits while striking out five in five innings of work. Relievers E.J. Encinosa, Sam Robinson and Iden Nazario all pitched well to keep the `Canes in the game late.

For the second straight day, Rutgers got on the board first, scoring a run in the top of the third on a bloop RBI single by Dan Betteridge.

The Scarlet Knights grabbed a three-run lead with a pair of runs in the fourth as Miami was its own enemy in the frame, committing three errors to go along with a lone Jarred Jimenez single.

As was the case all weekend, Miami had an immediate answer to the Scarlet Knights offensive output as the UM bats came alive in the bottom of the fourth. Following a Yasmani Grandal double to right-center to lead off the inning, Villasuso and Pelaez hit back-to-back homers to left to tie the game up at 3-3.

The lead went right back to Rutgers in the top of the fifth however, when Biserta hit his second homer of the weekend – this time a two-run shot to right-center – to put the Scarlet Knights up 5-3.

Following suit, Miami scored two of its own in the bottom of the fifth to tie it back up. Grandal brought home Stephen Perez on a sacrifice fly for the first run of the frame right before Villasuso smacked his second homer of the day to left.

The score remained tied at 5-5 until Rutgers scored a pair of runs in the top of the ninth, taking advantage of a couple of hits and crucial UM error and miscommunication on a sacrifice bunt attempt. The miscues led to a two-run double by Steve Zavala that put the Scarlet Knights up two heading into the bottom of the ninth.

Miami will return to Alex Rodriguez Park on Wednesday, Feb. 24 when Florida Gulf Coast travels across the state to take on the Hurricanes at 6 p.m.

SERIES NOTES
– Junior leftfielder Chris Pelaez went 8-for-11(.727) with a homer, four RBI, four runs scored and 13 total bases in his first weekend as a Hurricane. Pelaez reached base in 10-of-13 plate appearances and slugged 1.182 on the weekend.
– David Villasuso (Sunday) and Harold Martinez (Friday) each had two-homer games on the weekend.
– Villasuso led the `Canes with seven RBI on the weekend.
– Miami was successful on all 10 of its stolen base attempts. Sophomore rightfielder Nathan Melendres finished 4-for-4 while freshman shortstop Stephen Perez finished 3-for-3.
– Miami was awarded 30 free passes on the weekend (24 walks, 6 hit-by-pitches). Yasmani Grandal, who finished the weekend with a .667 on-base percentage, had seven hits, drew six walks and was hit by a pitch in the series.
– Closer David Gutierrez earned his first save (Saturday) and first win (Sunday) of the year against the Scarlet Knights.
– Miami was one run shy on Sunday of scoring double-digit runs in all three games of the season-opening series. The `Canes have never reached double-digit runs in three straight games against the same opponent to open a season.