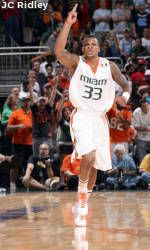 CORAL GABLES, FLA. – The University of Miami men’s basketball team opens a three-game ACC homestand at the BankUnited Center on Wed., Feb. 17, playing host to No. 6/6 Duke at 7 p.m on ESPN. The Blue Devils are the second ranked opponent for the Hurricanes in the last three games and their second-straight Top 25 opponent at home.

Miami is 11-1 at home in the BankUnited Center this season, including a 3-1 mark versus ACC opponents and a 1-0 record versus ranked teams in Coral Gables. The Hurricanes, who have won 13 of their last 14 at home, have won back-to-back ACC home games over Virginia Tech and then-No. 20/20 Georgia Tech.

The Hurricanes knocked off the Demon Deacons in their last contest at the BankUnited Center, 96-95, on Feb. 20, 2008, and took Duke to overtime at Cameron Indoor Stadium in their lone meeting last season before falling, 78-75.

During halftime of Wednesday’s game versus Duke, three former Hurricane greats will be paid tribute to with the institution of honored jerseys, as Jack McClinton (2006-09), Don Curnutt (1967-70) and Dick Hickox (1958-61) will have their jerseys raised to the rafters of the BankUnited Center. McClinton and Rick Barry will be on hand for the celebration, while the late Hickox will be represented by his wife, Sylvia. A bout of the flu has prevented Curnutt from traveling for the festivities.

League-leading Duke, winners of four straight, owns the 11-2 all-time series advantage over Miami with the teams splitting their last two meetings. The Blue Devils boast the highest-scoring trio in the NCAA, with Jon Scheyer, Nolan Smith and Kyle Singler averaging a combined 53.2 points per outing.

Seniors Dwayne Collins and James Dews made their 122nd appearances as Hurricanes in Saturday’s game at Clemson, moving them into a three-way tie for fifth place with James Jones in UM career games played. Brian Asbury set the school record last season with 130 appearances over his collegiate career.

The Hurricanes have defeated at least one ranked team in 14 of the last 15 seasons… Home teams are 46-18 in ACC play this season… Adrian Thomas has hit a three-pointer in 18 of the last 19 games, including converting 8-of-14 threes over the last three games (.571)… Miami has now converted at least 50 percent of its field goals 10 times this season, surpassing the nine times UM accomplished that over the previous two seasons combined (2007-08 and 2008-09)… Miami is led by three players in double-figure scoring — James Dews (12.1 ppg), Dwayne Collins (11.6 ppg) and Malcolm Grant (10.1 ppg)… In Miami’s home ACC wins versus Wake Forest, Virginia Tech and Georgia Tech, Dwayne Collins averaged 14.3 points, 8.7 rebounds, 2.0 blocks and 1.0 steal per game, while converting 62.1 percent from the field… Averaging about two three-pointers per game, the three-point trio of Adrian Thomas (52), Malcolm Grant (50) and James Dews (46) are on pace to become just the second trio in Miami basketball history to hit at least 50 three-pointers in a single season — both under head coach Frank Haith… The first Hurricane triumvirate to accomplish this was Robert Hite (72), Guillermo Diaz (61) and Anthony Harris (52) in 2004-05… With Dwayne Collins and James Dews both surpassing 1,000 career points this season, the Hurricanes are among four ACC teams with multiple 1,000-point scorers on their rosters — Maryland (3), Duke (2), Miami (2) and Virginia Tech (2).

Miami leads all ACC teams with 197 made three-point field goals. The Hurricanes have had strong production from the perimeter this season — averaging an ACC-leading 7.9 made three-pointers per game (39th in the nation) at a 37.8 percent clip (third in the ACC), led by three players averaging around two three-pointers per game at better than a 40 percent clip — James Dews, Malcolm Grant and Adrian Thomas. Grant (.435) and Thomas (.426) rank second and third, respectively, in the ACC in three-point field goal percentage and are also among the ACC’s top 10 in threes per game. Thomas went 3-for-5 from long range at Clemson for his 17th game of the season with three-plus threes, while Grant hit a pair of treys versus the tigers for his 18th game of the season with multiple three-pointers. He has hit three-or-more threes seven times this season.

Trevor Booker scored 18 points and Clemson (18-7, 6-5 ACC) won back-to-back games for the first time in almost a month with a 74-66 victory over Miami on Saturday. Andre Young had four of the Tigers’ nine 3-pointers.

Malcolm Grant had 13 points to lead Miami (17-8, 3-8), which has played three of its last four games on the road. Durand Scott added 10 points for his ninth double-digit scoring effort of the season for the Hurricanes.

With four rebounds at Clemson, Dwayne Collins jumped from seventh place into a tie with All-American Tim James in fifth place among Miami’s career rebound leaders with 856. He needs just one more board to move into fourth place.