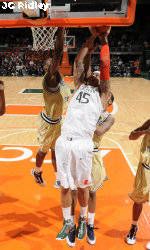 Men's Basketball Back on Road at Clemson

CLEMSON, S.C. – The University of Miami men’s basketball team returns to the road for its seventh ACC road game, traveling into wintry weather to face Clemson on Sat., Feb. 13, at Noon. FS Florida will carry the game in South Florida.

The Hurricanes are looking to put together back-to-back ACC wins for the first time this season, following Wednesday’s 64-62 victory over No. 20/20 Georgia Tech. Miami is 3-1 at home in the BankUnited Center versus conference opponents, but has not fared well on the road in league play and looks to earn its first conference road win versus a tough Tiger team on Saturday.

In the team’s lone meeting last season, the then-No. 25 Tigers overcame an early 12-point deficit to defeat the Hurricanes, 91-72, in the conference opener for both teams in Coral Gables. K.C. Rivers scored a game-high 28 points for Clemson, while Trevor Booker grabbed 16 rebounds. Miami struggled with a season-high 22 turnovers and missed 12 of its first 17 free throws, despite a fast start for an early 21-9 lead. Four Hurricanes finished in double figures, including 20 points from Jack McClinton, 11 points and three blocks from Cyrus McGowan and 10 points from Dwayne Collins.

THE FOUNTAIN OF YOUTH

With nine of 13 Hurricanes in their freshman or sophomore years, Miami has a decidedly youthful feel this season. Wednesday’s win over No. 20/20 Georgia Tech marked the second-straight career starts for freshman Garrius Adams and redshirt-sophomore Julian Gamble, as the Hurricanes started three underclassmen — two true freshmen and a sophomore — with a pair of seniors for the second-straight game. UM freshmen have made a combined 24 starts, while sophomores account for 26 starts. Miami has started a pair of freshmen five times this season.

UP NEXT FOR MIAMI

Following Saturday’s game at Clemson, Miami opens a three-game homestand on ESPN versus No. 7/8 Duke on Wed., Feb. 17. The Hurricanes knocked off the Demon Deacons in their last contest at the BankUnited Center, 96-95, on Feb. 20, 2008, and took Duke to overtime at Cameron Indoor Stadium in their lone meeting last season before falling, 78-75.

During halftime of Miami’s game versus Duke, three former Hurricane greats will be paid tribute to with the institution of honored jerseys, as Jack McClinton (2006-09), Don Curnutt (1967-70) and Dick Hickox (1958-61) will have their jerseys raised to the rafters of the BankUnited Center. McClinton and Curnutt, as well as Rick Barry, will be on hand for the celebration, while the late Hickox will be represented by his wife, Silvia.

Following a timeout, UM moved the length of the court and Durand Scott fed Dews, who faked out a defender before swishing his shot and leaping into a mob of jubilant teammates.

Dwayne Collins had 13 points and 11 rebounds for his 21st career double-double and eighth of the season, Adrian Thomas scored 12, all on 3-pointers, and Malcolm Grant had 11 in the first half. Reggie Johnson added 10 points and seven rebounds in 16 minutes.

Miami has defeated a ranked team in 14 of the last 15 seasons… With six important points versus the Yellow Jackets, James Dews became the 31st Hurricane to score more than 1,000 career points. He’s the second active Hurricane with more than 1,000 points — joining Dwayne Collins who accomplished the feat earlier in the season… Dews’ game-winning shot was his second of the season, as he also hit the game-winner at home against Wake Forest (Jan. 9)… With 11 rebounds versus Georgia Tech, Dwayne Collins became just the second player in UM history to amass 1,000 points, 850 rebounds and 100 assists in a career… Miami has converted better than 73 percent from the charity stripe over the last five contests, despite hitting just 65.7 percent over the season to rank ninth in the ACC. However, UM is shooting 70.5 percent against league opponents — sixth-best in the ACC.