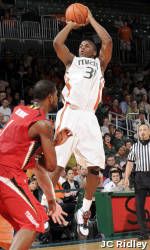 CORAL GABLES, FLA. – The University of Miami men’s basketball team returns to the hardwood on Sat., Nov. 28, at 1 p.m. versus USC Upstate in game two of a three-game homestand. Miami is 6-0 for the second time under head coach Frank Haith — the first occurring in 2007-08 en route to a 12-0 start and an NCAA Tournament berth.

Saturday marks the first meeting between Miami and USC Upstate. The Hurricanes have won all six games this season by an average of 23.5 points an outing, while the Spartans are 0-4, losing by an average of 11 points per game. Saturday marks UM’s second-straight game versus an Atlantic Sun opponent. Under Coach Haith, the Hurricanes are 9-0 all-time against A-Sun opponents.

Despite losing Jack McClinton — Miami’s all-time leader in three-point field goals and the most accurate three-point shooter in ACC history, the Hurricanes have had strong production from the perimeter this season — averaging 8.8 made three-pointers per game at a 40.8 percent clip.

The Hurricanes attempted a program-high 36 three-pointers in Wednesday’s win over Florida Gulf Coast. James Dews converted a career-high tying 5-of-6 three-pointers and ranks 10th among UM career three-point leaders with 131. He needs just three treys to move into ninth place and five three-pointers to climb into eighth place with assistant coach Jake Morton. Malcolm Grant added a season-high four from beyond the arc for UM.

UM converted 8-of-13 three-pointers — for a season-high 61.5 percent — in the Charleston Classic championship win over South Carolina. It is the highest three-point percentage by the Hurricanes since Jan. 7, 2006, when UM hit 63.2 percent (12-19) from long range in an 84-70 win over Maryland. Versus the Gamecocks, Dews went 3-for-3 from beyond the arc, while Adrian Thomas connected on 3-of-4 attempts.

Miami closed the 2008-09 regular-season with a 12-4 mark at home, and has won 11 of its last 13 in Coral Gables. The Hurricanes have have gone 59-23 (.720) at home under sixth-year head coach Frank Haith, including eight wins over ranked opponents. The Hurricanes have notched double-digit home wins at the BankUnited for the past two seasons and five times in six full seasons calling the arena home.

DeQuan Jones scored a career-high 16 points to lead three Hurricanes in double figures as Miami improved to 6-0 with the 77-58 win over Florida Gulf Coast on Wednesday at home.

Jones, who is shooting 70.4 percent from the field, hit 6-for-8 attempts, posted five rebounds and added an assist, block and steal. It was his first double-digit scoring performance since Jan. 3, 2009 (vs. North Carolina Central), while he hit his first three-point field goal since Jan. 25, 2009 (vs. Virginia Tech).

James Dews hit a career-high tying 5-of-6 three-point attempts en route to 15 points — for his third-straight double-figure scoring effort. Malcolm Grant, who returned to the starting lineup versus the Eagles, finished with 14 points — including a season-high four threes, five rebounds, four assists and a pair of steals in the win. It was his fourth double-figure scoring performance over the last five games.