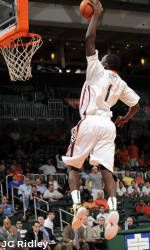 CORAL GABLES, Fla. – The University of Miami men’s basketball team opens the 2009-10 season at home at the BankUnited Center on Sat., Nov. 14, versus North Carolina Central at 4 p.m. The game will be broadcast live on Sun Sports.

Hurricanes fans will also be able to catch the broadcast of the football game versus North Carolina on televisions throughout the concourse, in addition to receiving updates throughout the game.

Miami – who went 19-13 last season, advancing to the second round of the NIT – rolled past Florida Southern, 85-52, in its exhibition game on Monday. Freshman Durand Scott, a five-star recruit out of New York City, led Miami with a game-high 17 points, five assists and five steals, while seniors Cyrus McGowan and Adrian Thomas also contributed double-figure scoring.

Miami looks to capitalize on a mixture of returning leadership and young talent. The Hurricanes return two of their top-three leading scorers from last year in Dwayne Collins and James Dews, as well as two of their top-three threats from behind the arc in Dews and Thomas. In addition to the returning veteran talent, sixth-year head coach Frank Haith and the Hurricanes welcome a recruiting class that ranked among the top 25 in the nation.

Collins is the Hurricanes’ returning leader in scoring, rebounding and steals, averaging 10.6 points and 7.3 rebounds per game as a junior, to go with 31 steals. The 6-8 forward played in all 31 games in which he appeared in 2008-09. Over the summer, Collins was evaluated for his NBA draft potential, and continued to strengthen his game by working with former NBA coach John Lucas and participating in the LeBron James Skills Academy and the Amar’e Stoudemire Basketball Camp.

Collins needs just 112 points to become the 30th Hurricane to score 1,000 career points – and the first since Jack McClinton accomplished the feat in 2007-08.

Dews returns as one of Miami’s top perimeter threats, needing just six three-pointers to climb in the program’s top 10 in career threes. The 6-4 shooting guard contributed 8.2 points and 2.7 rebounds per game as a junior, and is the Hurricanes’ returning leader in free throw percentage, assists, 3-pointers per game and minutes per game.

The Hurricanes also look for production from McGowan, who has proven to be both a low-post threat as well as a threat to score from behind the arc; Thomas, one of the team’s top defenders and a strong perimeter shooter; and sophomore DeQuan Jones, a superbly athletic player who is powerful around the basket.

Thomas, who suffered back-to-back season-ending injuries in 2006-07 and 2007-08, averaged 5.1 points per game, but saw his production jump to 6.8 points per game in ACC play, as he put together a streak of 14-straight games with at least one three-pointer. Jones is an explosive athlete who looks to expand his offensive arsenal after playing all 32 games as a true freshman, including three starts.

Miami also looks to six newcomers to make major contributions. Redshirt-sophomore Malcolm Grant, a 6-1 point guard who played at Villanova as a freshman, spent the offseason in Miami working on his game, and is expected to play a big role for the Hurricanes this season. Redshirt-freshmen Reggie Johnson, a 6-10 center, spent his redshirt season improving his conditioning, dropping 40 pounds in an effort to acclimate himself to the Hurricanes’ up-tempo offense.

Freshmen guards Scott and Garrius Adams, both ESPNU 100 picks, are also getting positive reviews from teammates heading in the season. Scott, ranked fifth in the nation among shooting guards by Scout, eighth by Rivals and 11th by ESPN, is the second five-star recruit signed by Haith, while Adams also brings a strong basketball IQ and a will to win to the Hurricanes.

Haith, who has led UM to the postseason in four of the last five seasons, has guided the Hurricanes to 18-plus victories in three of the last four years and looks to do so again despite a demanding schedule. The Hurricanes potentially play 15 games versus teams that advanced to the postseason last year, including defending national champion North Carolina. Miami will have at least nine nationally-televised games including home contests versus Duke, Wake Forest and Minnesota in the ACC/Big Ten Challenge.