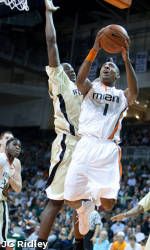 ATLANTA, GA… – The University of Miami men’s basketball team will play its second-straight ACC road game and its last of the 2008-09 regular season, traveling to Atlanta to take on Georgia Tech on Wednesday evening.

The Hurricanes will make a return trip to Atlanta next week for the 2009 ACC Men’s Basketball Tournament at the Georgia Dome.

Wednesday marks the 10th meeting between Miami and Georgia Tech, with the Hurricanes leading the all-time series, 5-4. Miami has won four straight over Georgia Tech, including a 64-63 victory in their last meeting on Feb. 17, 2008, in Atlanta.

In that game, Jack McClinton knocked down six three-pointers — including the go-ahead trey with 45 seconds to go — en route to a game-high 23 points and three steals, while James Dews added 11 points (4-4 FTs) and a pair of steals for the Hurricanes. The Yellow Jackets turned the ball over 22 times.

Miami’s strength of schedule is ranked TENTH in the country and third in the ACC. The Hurricanes have played five games versus teams that have been ranked No.1 this season and have played four of the five teams that have been atop the polls in 2008-09 — UConn, North Carolina, Wake Forest and Duke. Pitt is the only team that has reached the top spot this season that Miami is not scheduled to face.

The Hurricanes have four wins versus the nation’s top 50 in the RPI and six wins over the top 100 teams — with a 27-point victory over Wake Forest, a series sweep of Boston College and wins over Florida State and Maryland at home, as well at Kentucky. Six of UM’s 10 losses are to teams ranked among the RPI’s top 25, while its only non-conference losses are to Connecticut in the Virgin Islands and to Ohio State in the ACC/Big Ten Challenge.

Brian Asbury will be making his Miami record-tying 126th career appearance on Wednesday at Georgia Tech. The fourth-year senior has played in all but two games over his career (both as a freshman), including 32-straight starts during the 2006-07 and the 2007-08 seasons. If he plays in every game over the course of the 2008-09 regular season, he will break the school record of 126 appearances (set by Anthony King last season) on Senior Day versus NC State (Mar. 7). Asbury made his 100th appearance as a Hurricane in the 70-60 win over Southern Miss on Nov. 21.

Asbury is averaging 11.4 points and 4.6 rebounds over the last five games, converting .647 from the field and .375 from long range. His 502 career boards rank 10th among active ACC players.

In his fourth season, Jimmy Graham made his 100th career appearance in Miami’s game versus Clemson on Dec. 21 and has will make his 116th appearance on Wednesday at Georgia Tech – tying Darius Rice (2000-04) for 14th place in program history.

Graham is on pace to reach the 500-point and 500-rebound mark before he closes his Hurricane career. He enters Wednesday’s contest with 477 points and 482 rebounds.

AND THE WINNER IS…

Jack McClinton was named to the National Association of Basketball Coaches (NABC) All-District First Team on Tuesday in a vote by its members and is now eligible for the NABC’s All-America Team.

In 2008-09, the NABC realigned its districts by conference so student-athletes selected to the District 2 First and Second Teams are all from the ACC.

McClinton is the 22nd all-district selection from Miami and the first since Guillermo Diaz and Robert Hite were first-team honorees in 2006.

THAT WILL LEAVE A MARK

With four three-pointers in the win over Boston College on Feb. 21, Jack McClinton set a new school record with 269 career treys in just three seasons as a Hurricane. He added three three-pointers at Virginia last week to extend his school record to 272 triples. McClinton broke the record of 265 set by Steven Edwards (1992-96) 13 years ago.

With one three-pointer at Georgia Tech, McClinton would extened his streak to 31-straight games — which would tie Duke’s Shane Battier for the 18th longest streak in conference history and come within one game of the Miami record.

WINNING ON THE ROAD

The Hurricanes picked up their second ACC road win with a 62-55 victory over Virginia on Thurs., Feb. 26. Miami held Virginia scoreless over the final 3:52, while scoring the final seven points of the game.

The Hurricanes improved to 16-0 this season when leading at the four-minute and/or two-minute mark.

Jack McClinton hit a game-high tying three three-pointers to extend his three-point streak to an ACC-long 30-straight games — tying his previous personal-best which already ranks second in school history. He has hit three-or-more treys in a game 55 times throughout his career, including 12 times in the last 14 games.

McClinton’s 87 three-pointers in 2008-09 are the third-most by a Hurricane in a single season. In three seasons as a Hurricane, he owns the top-three spots for 1-2-3 McClinton sweep.

McClinton has scored in double-figures in 51 of his last 53 games, as well as 81 of 90 games as a Hurricane. It was his 26th double-digit output of the year and his 23rd straight.

Adrian Thomas also knocked down three treys to extend his three-point streak to 14-straight games — the third-longest active streak in the conference and tied for the 10th-longest streak in Miami history. Thomas has hit three-or-more three-pointers four times this season — all versus ACC opponents (with three of those performances on the road).

Miami’s .846 mark (11-13) from the charity stripe marked the second-best performance for the Hurricanes this season — trailing only a perfect 2-for-2 outing versus North Carolina.