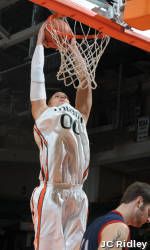 CORAL GABLES, FLA… – The University of Miami men’s basketball team heads to Charlottesville to face Virginia on Thursday, Feb. 26. The Hurricanes will play two-straight games on the road before returning home to the BankUnited Center for their regular-season finale on March 7.

THE SERIES
Thursday marks the ninth meeting between Miami and Virginia, with the Hurricanes leading the all-time series, 5-3. Miami has won two straight over Virginia, including a 95-93 victory in their last meeting in Coral Gables on March 1, 2008.

In that meeting, McClinton knocked down seven three-pointers en route to 34 points, while Jimmy Graham scored a career-high 19 points (7-10 FGs, 5-9 FTs) and Lance Hurdle added 10 points — including a key trey with 9.2 seconds remaining.

HURRICANE WARNING
Miami’s strength of schedule is ranked NINTH in the country and third in the ACC. The Hurricanes have played five games versus teams that have been ranked No.1 this season and have played four of the five teams that have been atop the polls in 2008-09 — UConn, North Carolina, Wake Forest and Duke. Pitt is the only team that has reached the top spot this season that Miami is not scheduled to face.

The Hurricanes have five wins versus the nation’s top 60 in the RPI  — with a 27-point victory over Wake Forest, a series sweep of Boston College and splits with Florida State and Maryland. In addition, the Hurricanes won at Kentucky and at St. John’s. Their only non-conference losses are to Connecticut in the Virgin Islands and to Ohio State in the ACC/Big Ten Challenge.

HE’S ON THE LIST
Senior guard Jack McClinton was among 30 men’s basketball players named to the mid-season list for the 2009 Naismith Trophy. The ACC leads all conferences with nine players on the list, followed by the Big East with eight.

The top 30 men’s list was voted on by the Atlanta Tipoff Club’s Board of Selectors, comprised of basketball journalists, coaches and administrators from across the country. The Naismith Trophy — which will be presented at the NCAA Final Four — is the most prestigious national basketball award given annually to the men’s basketball player of the year.

THAT WILL LEAVE A MARK
With four three-pointers in the win over Boston College on Saturday, McClinton set a new school record with 269 career treys in just three seasons as a Hurricane. He broke the record of 265 set by Steven Edwards (1992-96) 13 years ago.

In addition, the senior sharpshooter — who’s 269 career treys rank 11th in ACC history — has has hit a trey in 29-straight games, the longest active streak in the ACC and the third-longest in UM history. He already owns Miami’s second-longest three-point streak of 30 straight (set between 2007 and 2008) and can tie it with a three-pointer at Virginia on Thursday.

PORTSMOUTH BOUND
McClinton has been invited to participate in the 57th annual Portsmouth Invitational Tournament in Portsmouth, Va., from April 8-11. The P.I.T., the nation’s oldest amateur basketball tournament, is a showcase for outstanding basketball players in their senior year of college and is recognized by NBA and European scouts as the premier showcase for future professional players. Additionally, it is the only tournament for college seniors to participate in and be evaluated by the National Basketball Association prior to the NBA’s new Draft Combine (May 27-31 in Chicago).