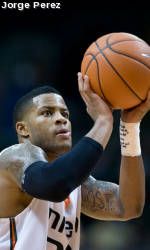 CORAL GABLES, Fla. (AP) — The Stetson defense held Jack McClinton scoreless for an entire half, but the Miami guard still found a way to contribute.

McClinton had six assists and finished with 12 points, leading the Hurricanes (No. 21 ESPN/USA Today, No. 22 AP) to a 79-65 win over their instate rival on Saturday.

“It’s about team,” Miami coach Frank Haith said. “I think that our guys understand that we’re about growing as a team, and its good to see Jack have those kind of numbers tonight.”

“I give credit to my team — came out and played hard,” said McGowan, who also had eight rebounds. “I just wanted to come out and just rebound. That was my main priority today, and that’s what I did.”

“We tried our best to take McClinton out of the game and he ends up with six assists,” Stetson coach Derek Waugh said. “That’s the sign of a good player who can get others involved.”

Collins, a 6-foot-8 forward, fell just shy of recording his third double-double of the season, finishing with seven rebounds.

“I walked in at 2 o’clock, hour and a half before the game, and Dwayne’s already got a sweat going,” Haith said. “I remember times in games last year, Dwayne was dry as a bone before the game. I think he’s realized that he’s got a routine now, he’s preparing himself for games.”

A 10-0 run midway through the first half, which included pair of 3-pointers by Eddie Rios, gave Miami a 30-16 lead, and the Hurricanes rolled to a 39-27 lead at the break.

Stetson went just 10-of-31 from the field during the first half, hitting 3-of-14 from beyond the arc.

During one stretch early in the first half, the Hatters missed eight of nine shots. The Hurricanes were leading 11-8 when the Hatters scoring drought started 2:44 into the game and failed to capitalize on their offensive woes.

In the second half, Stetson got no closer than Kris Thomas’ two free throws, which cut Miami’s lead to 66-56 with 5:11 remaining. The Hurricanes responded by scoring eight unanswered points in the next 1:45, when McClinton scored five points and Hurdle added a 3-pointer during the run for a 74-56 Miami lead.

Thomas scored 14 points for the Hatters and Sheldon Oliver added 11.

“I give our guys a lot of credit for keeping their head, playing hard and making Miami work,” Waugh said.

It was the sixth straight win over Stetson for the Hurricanes, who haven’t lost to the Hatters since 1971.

The Hurricanes opened their season with their highest preseason ranking ever at No. 17, but dropped five spots after losing 76-63 to No. 2 Connecticut at the Paradise Jam in the U.S. Virgin Islands on Sunday. Miami bounced back with an 80-45 win over San Diego on Monday.

“Coming into here, we had the utmost respect for Miami,” Waugh said. “They’re a very good offensive team and probably an underrated defensive team. To win a game like this, we need to have a kind of unbelievable shooting night, and we didn’t have that.”