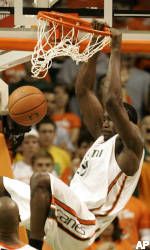 CHARLOTTE, N.C. – The University of Miami men’s basketball team enters the 2008 ACC Tournament seeded a program-high fifth and will face 12th-seeded NC State in Thursday’s first round at 2:30 p.m. in Charlotte Bobcats Arena. The winner of the Miami/NC State game advances to the quarterfinals to face fourth-seeded Virginia Tech on Friday.  <?xml:namespace prefix=”o” ns=”urn:schemas-microsoft-com:office:office”?>

MIAMI AT THE ACC TOURNAMENT

The Hurricanes are 2-3 in ACC Tournament games in the program’s three-year history at the event… Miami has advanced past the ACC Tournament’s first round in two-straight seasons… Last season, the 12th-seeded Hurricanes knocked off fifth-seeded Maryland, 67-62, in the first round and then took fourth-seeded BostonCollege to overtime in the quarterfinals, before falling 74-71.

Just one year ago, the Hurricanes were the tournament’s 12th-seeded team — and the media predicted the same outcome for 2007-08 in the preseason poll. However, Miami head coach Frank Haith believed otherwise, and often opined throughout the season: “I like this team and I won’t waiver off these comments, I think this team has a chance to be in the upper half of this league.” Miami finished the regular season in fifth place of 12 teams.

A FIRST TIME FOR EVERYTHING

Jack McClinton made history as he became the first Hurricane named to the All-ACC First Team. An All-ACC Third Team pick in his first season competing for the Hurricanes in 2006-07, the junior guard earned first-team honors this season after leading the league in three-point field goal percentage (.442), three-point field goals per game (3.00) and free throw percentage (.900), while ranking fifth in scoring with 17.4 points per game — including an 18.8 point average in ACC games. He is the only All-ACC First Team selection to also earn All-ACC Academic Team recognition this season.

HE SHOOTS… AND HE SCORES

With 21 points at FloridaState on Saturday, Jack McClinton became just the 28th Hurricane to score 1,000 career points. He is just the fourth to do it in his first two seasons — and the first to accomplish that feat since Don Curnutt in 1969. McClinton has scored in double figures 25 times this season — including 10 games of 20-or-more points and two games of 30-plus points.

The Hurricanes have won six of their last eight games entering the ACC Tournament. Bouncing back from a disappointing 2-6 start in ACC play, the Hurricanes went 6-2 over the second half of the ACC season, reaching a program-record eight ACC wins with the victory over BostonCollege.

TALK ABOUT A TURNAROUND

With a 10 game swing from last season, Frank Haith’s Hurricanes have put together one of the largest turnarounds in NCAA Divison I basketball this season. After an injury-plagued squad struggled to a 12-20 record in 2006-07, this edition of the Hurricanes are 21-9 and finished the regular season in fifth place in the ACC with program-best 8-8 mark.

The 21-9 Miami squad enters the ACC Tournament ranked 28th in the latest Collegiate Basketball News RPI with the nation’s 32nd toughest schedule, while playing in the nation’s top-ranked conference. The Hurricanes have gone 3-3 versus top-50 ranked teams in the RPI and 9-7 versus top-100 ranked teams in the RPI, with wins over Duke (4), Clemson (22) MississippiState (37), VCU (53), Virginia Tech (57), Maryland (70), Georgia Tech (73) and Providence (98). Of the 16 total ACC games Miami has already played, six of those opponents were ranked among the ACC’s top-three teams entering the game.

The Hurricanes have four North Carolina natives in their program, including head coach Frank Haith who spent much of his youth in the area, as well as his college years at Elon. Fifth-year senior Anthony King and freshman Julian Gamble are Durham natives that graduated from Southern Durham High School, while junior Jimmy Graham grew up in Goldsboro and graduated from Charis Prep.

With four three-pointers at FloridaState, Jack McClinton moved past Guillermo Diaz into fourth place in Miami history in career treys with 175 in just his second season as a Hurricane… McClinton has scored 20-or-more points in three-straight games… McClinton and Lance Hurdle — who rank among the ACC’s top five and the nation’s top 20 in free throw shooting — converted 17-of-17 free throws versus Boston College and 8-of-8 at Florida State. James Dews did not get to the charity stripe in either game, but has not missed a free throw since Jan. 23… Miami’s 14-2 record at home this season trails just Duke and WakeForest for homecourt dominance in the ACC… Of Miami’s six ACC road losses, two came in overtime and one was the result of a last-second shot.

Thursday marks the seventh meeting between Miami and NC State, with the Wolfpack owners of the 4-2 all-time series lead. Of all of the ACC teams, the Hurricanes and Wolfpack have played each other the fewest times. NC State won a heartbreaker over Miami in their last meeting, a 79-77 overtime decision in Raleigh on Jan. 19. Since they last met, the teams have taken different turns as the Hurricanes have gone 7-6 to close the season, while the Wolfpack has gone 3-10 — including losing eight straight heading into the ACC Tournament. Their last victory was a 73-63 win over Virginia Tech at home on Feb. 5.

A LOOK AT NC STATE

Freshman J.J. Hickson leads three NC State players in double-figures, with a team-high 14.4 points, 8.3 rebounds and 1.6 blocks per game en route to All-ACC Honorable Mention and All-Freshman Team accolades. He converts a team-high 59.2 percent from the field. Gavin Grant adds 13.5 points and a team-best 3.0 assists an outing, while Courtney Fells puts up 10.8 points — including a team-high 1.8 three-pointers — per game. Despite dropping the last eight straight, the Wolfpack still earned 10 wins at home and owns a 3-0 record on a neutral court — courtesy of a championship run through the Old Spice Classic early in the season. Just last season, the then-10th seeded Wolfpack won three-straight games to advance to the ACC Championship, where they fell to top-seeded North Carolina, 89-80, and then went on to advance to the quarterfinals of the NIT.