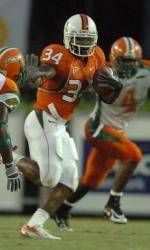 MIAMI (AP) — Derron Thomas was Miami’s fourth-string running back Saturday night, and even he eclipsed the 100-yard mark.

The Hurricanes moved the ball almost at will against overmatched Florida A&M — and may have built some much-needed momentum in the process.

Charlie Jones rushed for two touchdowns, Javarris James ran for one and caught another, and Tyrone Moss added a 20-yard scoring run in his first game back from a knee injury as the 17th-ranked Hurricanes eased past the Division I-AA Rattlers 51-10.

“Our offense is full of playmakers,” James said. “We’re starting to click a little bit.”

Miami (1-1), which managed only two rushing yards in a season-opening loss to Florida State, gained 339 yards on 47 carries against the smaller Rattlers. Thomas had 109 yards on 11 carries, while James had 75 yards, Moss 64 yards and Jones 62 more for the Hurricanes, who held a 563-225 edge in total yards.

“We’ve got a lot more work to do,” Miami coach Larry Coker said. “Proud of our offense. The efficiency was there. We didn’t make any mistakes. Guys made plays, conducted drives and I was really very pleased with that part of the game.”

Kyle Wright completed 13 of 18 passes for 166 yards and a touchdown, a 21-yard catch-and-run play to James. Miami backup Kirby Freeman was 6-of-9 for 55 yards and another score, a 5-yard toss to Jerrell Mabry late in the third quarter.

“Of course I wanted to go out and put up a bunch of stats, but I was really glad with how the offense played today,” Wright said. “We said before the game we wanted to come out and be efficient, move the football and put points up on the board. And I believe every drive I was in we scored a touchdown, so that was very promising for our offense to get some confidence and kind of get the ball rolling going into next week.”

It was the first Orange Bowl visit for Florida A&M coach Rubin Carter since his All-American playing days at Miami as a defensive tackle in the 1970s.

And it wasn’t exactly a happy return, as the Hurricanes used the game as little more than a tune-up exercise for next weekend’s visit to No. 13 Louisville — a 62-0 winner over Temple earlier Saturday.

“We couldn’t finish,” said Florida A&M wide receiver Roosevelt Kiser, who caught a 7-yard scoring pass for the Rattlers’ lone touchdown. “Their defense was extremely fast. That was the fastest defense I’ve ever seen.”

Florida A&M quarterback Leon Camel — who started in place of Albert Chester II, sidelined by a finger injury — was a bright spot for the Rattlers (0-2). Camel, who stands only 5-foot-6, ran for a team-high 55 yards and threw for 143 more.

Camel sprinted across the field, right arm raised high after the scoring toss — oblivious that the play drew the Rattlers within 35-10. Maybe there was some cause to celebrate; it was the third touchdown Florida A&M scored in six meetings with Miami since 1980.

“They were very tough, very fast,” Camel said. “They have a lot more speed than a lot of teams.”

Florida A&M beat Miami 16-13 in Tallahassee 27 years ago, but every matchup since has been a rout — with the Hurricanes outscoring the Rattlers 307-33 in those contests.

Moss got his first game action since tearing a left knee ligament 10 months ago. He wasn’t originally expected to play against Florida A&M, with coach Larry Coker suggesting that the team’s leading returning rusher would probably make his season debut in one of Miami’s next two games.

But the plan apparently changed, and paid off; Moss got his first score of the year with 11:53 left in the third quarter. He entered with 8:06 left in the second quarter, catching a 7-yard pass from Wright on his first play — and drawing a loud ovation when his name was announced for the first time.