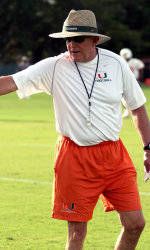 Hurricanes Go Through First Double Session of the Season

Coral Gables – The mercury touched 90 degrees and the heat index surpassed 100 to start the back end of the Miami Hurricanes first double session of the preseason on Saturday at the Greentree Practice Fields. UM’s training and coaching staffs made sure the players had what they needed to not only get through the practices, but get through the practices healthy.

“We have water for the players throughout practice, but we actually had two breaks to let them get hydrated,” head coach Larry Coker said. “We’re a little deeper than we have been and more players are getting involved in the rotation, so we’re not running quite as much.”

Officials were also present at both practices to help the team cut down on penalties, Coker said. While there was no full-scale scrimmage, the team practiced their goal line and short yardage with live contact. “The offense scored some and the defense stopped them some,” Coker said. “As a head coach that’s what you like to see.”

But Coker isn’t so much concerned with who is catching touchdown passes, more so with fundamentals.

“I’m more concerned about guys running routes properly and making catches when they have opportunities,” Coker said. “If they do that, then touchdowns will come. “I’ve been pleased with the progress (the offensive line has) made. We’ve got a long way to go. But at this stage of the game, I’ve been very pleased. They’re not making mental mistakes. I think they’ll be fine.”

There have been no first team and second team completely set on defense, Coker said.

“We’re just trying to practice and get better,” Coker said. “We have some guys going with the first unit, some guys with the second, and sometimes those things change. We’re really not into the first team and second team right now.

“I’ve been very encouraged with (defensive tackle) Bryan Pata. I think that’s going to be an exciting move for us. He’s really taken to it and he’s going to help the team from that position.”

Miami will practice on Sunday at 3:20 p.m. at the Greentree Practice Fields.

Injury UpdateLinebacker Glenn Cook should be back within a two- to four-week window from a knee injury, Coker said. Cook’s injury meant increased reps for Darryl Sharpton and Romeo Davis. “He’s a very physical player. He has great speed and he’s tough. He just needs to get honed in on his assignments and he’ll be special,” Coker said of Sharpton. Running back Charlie Jones saw some work but was not at full speed, leaving Derron Thomas, Javarris James, Kylan Robinson and Andrew Johnson to handle the ball-carrying duties. Tyrone Moss also saw action during practice. Offensive tackle Tyrone Byrd is a little “banged up” and will have an MRI on his knee.