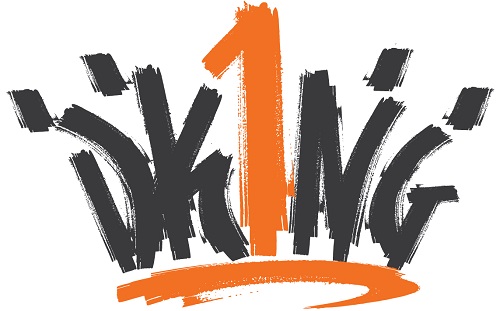 Since arriving at Miami in 2020 as a graduate transfer D’Eriq King has become the heartbeat of the Hurricanes, making highlight-reel plays for one of nation’s most dynamic offenses and taking command of the locker room as the consummate leader on and off the field.

In doing so King cemented his place as one of college football’s best players in 2020 before announcing that he would be returning to the Hurricanes in 2021.

A bona fide contender for the Heisman Trophy and numerous other accolades, King enters the season as one of 35 players selected as ones to watch for the 2021 Walter Camp Player of the Year Award. He has also been selected to the watch list for the Maxwell Award, honoring college football’s player of the year, and the Davey O’Brien Award, honoring the nation’s top quarterback.

"I’m excited. The team is excited. We’re ready to get out there. We all have one goal."

King has three career games with five passing touchdowns and 100-plus rushing yards, the most of any FBS player over the last two decades.

King, who transferred from Houston, holds the FBS record with 16 straight games with at least one passing and rushing touchdown — breaking the record of 14 set by former Heisman Trophy winner Tim Tebow. He totaled 6,346 yards of offense in 22 starts over three seasons at Houston.

The King is back and he's on a mission.

Entering the 2021 season King was one of 35 players selected as ones to watch for the 2021 Walter Camp Player of the Year Award. He was also selected to the watch list for the Maxwell Award, honoring college football’s player of the year, and the Davey O’Brien Award, honoring the nation’s top quarterback.

In 2020, King was a finalist for the 2020 Earl Campbell Tyler Rose Award. He was also named a 2020 semifinalist for the both the Davey O’Brien Award and Maxwell Award and a Top 10 Johnny Unitas Golden Arm Candidate. King earned honorable mention All-ACC honors.

King repeated as ACC Quarterback of the Week after Miami’s 52-10 dismantling of Florida State, during which he threw for 276 yards and two touchdowns, completing 72 percent of his passes.

After the win over NC State, King was also named ACC Quarterback of the Week; Davey O’Brien Great 8; Pro Football Focus Offensive Player of the Week; Reese’s Senior Bowl Co-Senior of the Week on Offense; and a Manning Award Star of the Week.

While at Houston, King was a 2018 Maxwell Award semifinalist and a 2018 Earl Campbell Award finalist. 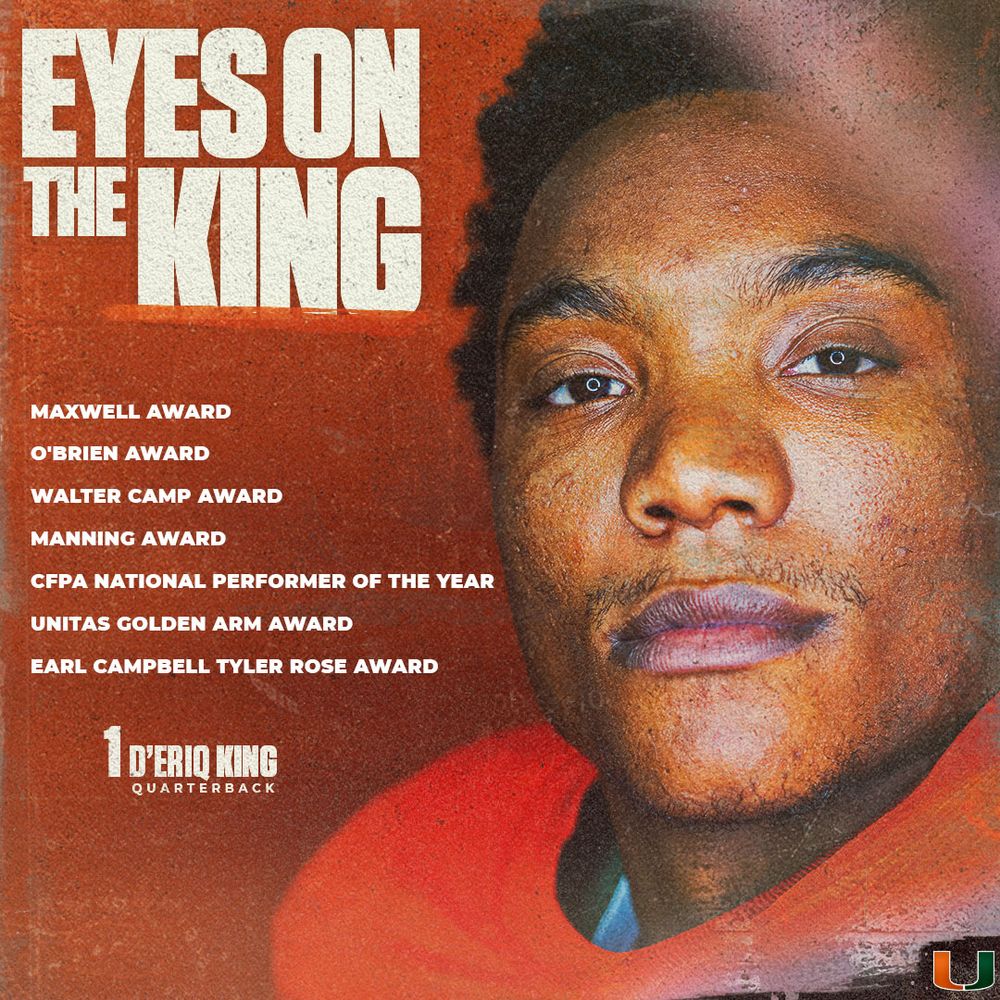 “When our fans get to watch him play, you’ll get to see the end product, but every step along the way, all he’s done to get back on the field, he’s been relentless. I couldn’t be more proud of him.”

D'Eriq King's tireless work ethic is evident as he rehabs his knee injury in this excerpt from ACC Network's "All Access with Miami Football."

The Rally in Raleigh

In Miami’s pulsating, 44-41 win at NC State on November 6, King delivered an otherworldly performance — completing 31 of 41 passes for 430 yards and five touchdowns with no interceptions. He also rushed for a team-high 105 yards, including a 42-yard run and the game-winning scamper to run out the clock. King’s 535 total yards of offense was the third-highest single-game total in FBS this season.

UM trailed the Wolfpack on four separate occasions — including by 10 points in the fourth quarter — before King rallied the Hurricanes, who eclipsed 600 total yards for the first time since 2014.

According to ESPN, it was just the sixth time in the last 20 seasons that a quarterback had at least 400 passing yards, five passing touchdowns and 100 rushing yards in a single game. The last player to put up those kinds of numbers was King himself — during his final season at Houston in 2018.

King fires the game-winning touchdown pass to Mike Harley in the Hurricanes' 44-41 win at NC State.

“He’s just a natural born leader. You can see his talent when he’s on the field but he is just a guy who is connected to every guy in the locker room. It’s just been great for us to have a player that the entire team can rally around and have trust and confidence in that he’s going to bring his best every day.”

“[D’Eriq King] could be the face of the sport this year. He is everything that is right about the game. I feel like because he has solidified that position at quarterback, it not only impacts the offense, but also the defense and the belief of an entire team that we can win this game today.”

“Some star athletes aren’t wired for leadership roles. D’Eriq is. Shortly after he enrolled at Miami and started winter workouts with his new teammates, he set up group texts with every position group on the team. He texted them daily, ‘because I was the new guy and needed to show them I cared about them.’”

"D’Eriq King could be the face of the sport this year. He is everything that is right about the game."

.@KirkHerbstreit has named @DeriqKing_ as the 2021 Ultimate Herbie award winner, given to the player that epitomizes what college football is all about.

Couldn’t have said it better ourselves. pic.twitter.com/21HyXfUftS

.@ReggieBush spoke with @DeriqKing_ to discuss his decision to come to Miami, the love he has for his teammates and what he brings to the table. (🎥: @CFBONFOX) pic.twitter.com/FCIlfPSFxX

Over the past year, D’Eriq King has suffered hardships both on and off the field.

He opens up about the death of his father and his transfer from Houston to Miami. pic.twitter.com/fnEduLvpff
— College GameDay (@CollegeGameDay) September 19, 2020