LOUISVILLE, Ky. – There was plenty of offensive firepower inside Cardinal Stadium on Saturday night, but the No. 17 Miami Hurricanes proved to be too much for No. 18 Louisville.

The Canes (2-0, 1-0 ACC) posted their second straight game with nearly 500 yards of offense and kicker Jose Borregales had a career day to push Miami past the Cardinals, 47-34, before 12,120 fans in the first conference game for both sides.

“That’s a very excited locker room right across the hall. It was a hard win obviously, we expected it to be, hard to win on the road in the conference,” head coach Manny Diaz said. “It feels really good to be 1-0. Everything we thought about Louisville before the game turned out to be true. Very dangerous football team, that offense creates so many problems for you. I just I’m so proud of the way that we persevered through.”

In a game billed as a primetime battle of two high-octane offenses, the Hurricanes exploded for 237 yards of total offense and 20 points in the opening half. Miami’s defense kept Louisville out of the end zone, limiting the Cardinals to a pair of field goals while forcing two turnovers over the first 30 minutes of play.

Louisville (1-1, 0-1 ACC) had a successful opening drive that was aided when Miami striker Keontra Smith hit U of L quarterback Malik Cunningham out of bounds for 15-yard personal foul that pushed the Cardinals to the UM 28. The Hurricanes’ defense held Louisville to a 40-yard field goal by James Turner, but the Cardinals took a 3-0 with 9:02 remaining in the opening quarter.

Miami’s explosive offense answered right back on its next possession. Running back Cam’Ron Harris exploded for a 38-yard gain to the Louisville 26. Three plays later, quarterback D’Eriq King connected with tight end Will Mallory for a 17-yard touchdown that capped a five-play, 75-yard scoring drive that took just a minute and 51 seconds to vault the Canes ahead, 7-3.

“I think we played a pretty good game,” said King, who threw for 325 yards and three touchdowns. “There was still a lot of stuff we left out on the field, but I think it just takes time. Things are going to keep getting better. I’m looking forward to going to practice tomorrow and getting after it.”

After forcing a Louisville punt, Miami’s offense got back to work and covered 86 yards in just three minutes and 39 seconds before freshman Jaylan Knighton scored his first career touchdown on a three-yard rush that gave the Canes a double-digit advantage, 14-3, with 1:41 left to play in the first quarter.

“It was a great feeling. I give all the glory to God,” Knighton said of scoring his first touchdown. “Coach put me in the best position for me to score, score twice today, one on the goal line and one on a pass play. It felt great; a cheerful moment and I celebrated it with my team.”

Despite Miami’s consecutive touchdown drives, Louisville refused to fold. Facing fourth and inches from the Miami 37, head coach Scott Satterfield elected to go for it and running back Javian Hawkins rushed for four yards to keep the drive alive. The Cardinals charged to the Miami 3, but Cunningham could not connect on third down with tight end Ean Pfeifer, who was wide open in the end zone, and Turner converted on a 22-yard field goal to salvage some points from the drive. 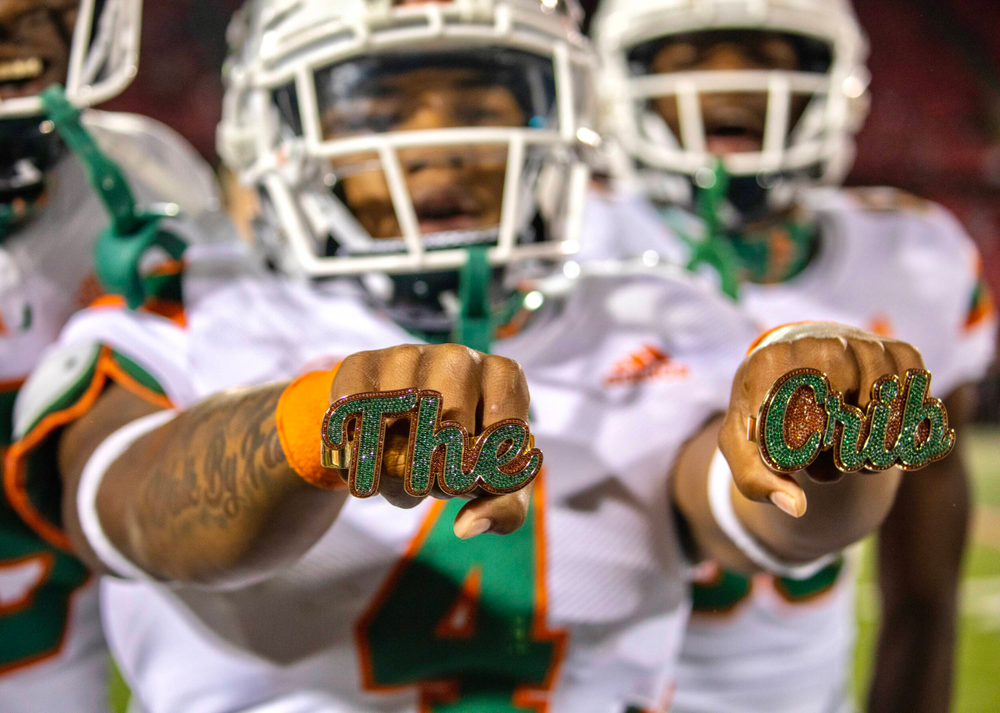 Miami answered on the next drive with a field goal of its own, as Borregales drilled a 48-yard kick to push the Hurricanes advantage back to 11 points, 17-6.

A graduate transfer from Miami, Borregales followed with a career-long 57-yard field goal that split the uprights to cap another UM scoring drive on the Hurricanes next possession and increase their lead to 14 points with 5:49 remaining until halftime. The kick, which is the longest in Cardinal Stadium history, tied a school record for longest field goal made. Borregales became the third Cane to make a 57-yarder, joining Danny Miller (11/7/1981 at Florida State) and Michael Badgley (11/21/2015 vs. Georgia Tech).

Facing a 14-point deficit with 2:46 remaining in the first half, Satterfield elected to go for it on fourth and three from the Miami 41. Louisville would not have the same success on its fourth-down attempt, as the Hurricanes blitzed and Bradley Jennings Jr. sacked Cunningham for a four-yard loss to end the drive.

Louisville forced a Miami punt, but would not keep possession for long as Cunningham was intercepted by Al Blades Jr. at the UM 42 and the junior cornerback became the first Hurricane to wear the Turnover Chain 4.0 that features a state of Florida “U” charm weighs 300 grams, while the chain itself weighs two kilograms and is about 30 inches long. There are 1,400 sapphire stones in the “U” – half green and half orange. The state of Florida portion of the charm has 1,900 white sapphires.

“The theme of the chain this year is a state of Miami type deal,” Diaz said. “The three counties are colored in orange and green, it’s kind of a cool look and it pays homage to Coach Schnellenberger when he got this whole thing going by declaring the state of Miami.” The chain made another appearance on the final play of the opening half, as Louisville running back Hassan Hall fumbled and Miami safety scooped up the loose ball to earn the right to don the chain as the first 30 minutes of play came to a close.

After keeping Louisville out of the end zone for the entire first half, the Cardinals finally found their way across the field when Hawkins sprinted in from 19 yards away to cut Miami’s lead to seven, 20-13.

The momentum swayed right back to Miami, as Harris made one cut after taking a handoff from King and outran everyone for a career-long 75-yard touchdown sprint that put the Hurricanes back ahead by 14 points, 27-13. Harris’ touchdown run was the longest rush by a Miami back since DeeJay Dallas had an 83-yard run vs. Duke in 2018. The junior finished the game with 134 rushing yards on nine carries.

The Cardinals countered with an 11-play scoring drive that ended with a six-yard touchdown catch by Tutu Atwell, but Louisville would not have had the opportunity to score without a seven-yard gain by Hawkins on fourth and 1 from the UL 35. The rush gave Louisville a fresh set of downs and the Cardinals found their way to the end zone seven plays later.

Miami had another one-play scoring drive on its next possession, as King flipped a pass to a wide open Knighton and the freshman sprinted untouched for 75 yards for a touchdown that gave the Hurricanes a 34-20 lead with 5:02 left in the third quarter. The pass was the longest by a Miami player since Malik Rosier connected with Jeff Thomas for 78 yards at North Carolina in 2017.

“Our offense, the two explosive plays in the third quarter, and again, we kind of kept that same thing we had a week ago where anytime the other team tried to make a push, our offense had a great answer,” Diaz said. “So a lot to fix, but a lot to be proud of. It feels great to be 1-0 in the conference heading back home for Florida State week.”

The Canes added a 22-yard field goal by Borregales on their next possession, taking a 17-point lead with 40 seconds left in the third quarter.

The Miami native made a 40 yarder to get Miami to 40 points with 10:58 remaining in the game. With four made field goals, Borregales tied a Cardinal Stadium record for field goals made by an opposing kicker — previously done by Wake Forest in 2016 and Kentucky in 2014.

“Jose adds such confidence to our football team,” Diaz said. “There was a little bit of a wind going in that direction and that’s a situation that a year we’re punting or most people are punting or you’re going for it. So, to have a guy that can that can be good from that range … that really helps us because those points really mattered as it turns out at the end with some of those onside kicks.”

Louisville continued clawing back against Miami, adding seven points after Cunningham found Marshon Ford for a three-yard touchdown that brought the Cardinals within two touchdowns with 7:04 left to play.

But Miami responded with a quick strike touchdown, as King found Brevin Jordan deep over the middle of the field for a 47-yard touchdown that capped a three-play scoring drive and put Miami ahead by 20 points. Jordan led the Canes in receptions for the second straight week, hauling in seven passes for 120 yards and a touchdown.

The Cardinals scored for the final time with 2:06 left to play when Cunningham found Atwell in the end zone for a 19-yard touchdown.

Louisville recovered an onside kick to try and keep its comeback hopes alive, but the Canes’ Zach McCloud’s sack-fumble of Cunningham forced the third turnover of the night. The redshirt senior finished the night with nine tackles, a sack, a tackle for loss and a fumble recovery, while Bubba Bolden led all Canes with 11 tackles and added a forced fumble. Miami had three sacks and 10 tackles for loss to help secure a 13-point road victory in its ACC opener.

“It was great to finally get one, it felt like we waited a while, and then once we got one then, here they came and that’s really what you want to have happen,” Diaz said of creating turnovers. “We still have missed a couple more that we really have to get. We just have to keep doing ball drills, and those type things but it’s great to see. Also, a lot of credit, we have now played 120 minutes of offensive football and not turned the ball over, as well. That is huge and that is a big part of winning football.”

The Hurricanes return home to Hard Rock Stadium for a primetime matchup against rival Florida State set for kickoff at 7:30 p.m. on ABC. ESPN’s College GameDay will be on site on Saturday morning for the 23rd game involving the Canes picked as the site of the show.