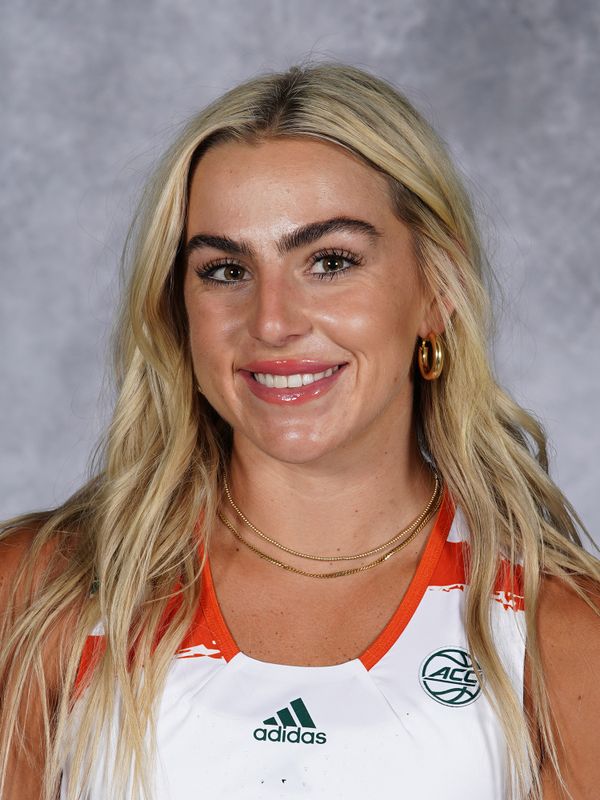 Set NCAA record for free-throw percentage in a season, converting 109-of-112 for 97.3 percent, breaking the mark of 96.5 (111-of-115) set by Kitija Laksa of South Florida (2018)…Became just the third player in Mountain West history, and first since 2006, to lead the MW in in scoring and rebounding…Averaged 19.8 points and 9.5 rebounds per game overall and 20.8 points and 9.9 rebounds per game in conference play…20th player in NCAA history to record at least three triple-doubles in a season…Posted second-most triple-doubles (three) in the NCAA during 2020-21…Earned MW Player of the Week on Jan. 17 following her second triple-double…Finished second in the MW in assists per game with 5.7…Pulled down a conference-best 8.1 defensive rebounds per game… Nationally, ranked 10th in defensive rebounds per game, 15th in assists per game, 21st in points per game, 48th in assist-turnover ratio (1.98) and 49th in rebounds per game…Started all 29 games, averaging 38.1 minutes per outing, sixth-highest in the NCAA…Her 20.8 points per game in conference play ranked sixth-highest in league history, passing the 20.6 she had a season earlier…Recorded 21st season-opening triple-double in NCAA history with 25 points, 12 rebounds and 10 assists at Utah Valley…Was the first triple double of her career…Against San Jose State, broke Fresno State’s single-game record for assists with 13 while not committing a turnover…It was the 11th-best assist-turnover ratio in the NCAA in the last decade and was the best against a D-I opponent in MW history…The 13-0 ratio tied Sabrina Ionescu for the highest ratio in a triple-double in the last decade…Recorded a conference-best 12 double-doubles…Dropped a league-leading 17 20-point games, finishing the season with five in a row…Went 10-of-10 from the charity stripe twice during the final five games…Played every minute in 12 games.

Played in all 32 games with 31 starts…Played at least 40 minutes in nine games, including every minute in seven…Broke Fresno State’s freshman records for most points (512) and most rebounds (233) in a season…Led the team and finished second in the conference in points per game (16.0 ppg), total points (512) and made field goals (189)…Ranked third in the league in 3-point percentage (34.3%), 3-pointers made per game (2.66), 3-pointers made (85) and 3-point field goal attempts (248)…Finished sixth in the MW in total assists (117) and assists per game (3.66 apg), and seventh in assist-to-turnover ratio (1.52)…Second on the team and eighth in the conference in rebounds per game (7.3 rpg) and total rebounds (233)…Nationally, ranked ninth in 3-point field goal attempts, 18th in 3-pointers made, 24th in field goal attempts, 36th in 3-pointers made per game, 45th in total minutes, 71st in made field goals and 78th in total points…Recorded the second-most 20-point games in the league (11)…Had the sixth-most double-doubles (six) in the conference and eighth-most double-digit rebounding games (six)…Was one of nine players in the country to average at least 16 points per game, seven rebounds per game and three assists per game, and was only freshman and only player under 5-foot-10 to accomplish the feat…Was one of 15 players under 5-foot-10 in the NCAA to average at least seven rebounds per game, and one of three 5-foot-6 or under…Ranked ninth among freshman in the NCAA in points per game and 18th in both rebounding per game and assists per game…Was one of four freshman under 6-foot to average at least 7.0 rebounds per game, and was only player under 5-foot-10…Posted 17 points and seven rebounds at Cal Poly in first career game…Recorded first 20-point game six days later versus UC Davis…Recorded season-highs of nine assists and six steals in the conference opener at UNLV…Tallied first career double-double with 13 points and 10 rebounds at Santa Clara…Grabbed a season-high 15 rebounds at San Jose State…Dropped a season-high 31 points and had six assists and five steals in comeback at New Mexico…Registered 21 points, 10 rebounds and seven assists championship clinching game versus San Jose State.

High School: Named Arizona 5A Player of the Year as a senior…First-Team All-Arizona…All-Star Game MVP…Broke 2,000-career point mark (2,282)…Averaged 21.8 points, 8.9 rebounds and 6.5 assists as senior…State runner-up in 2019 (25-6)…Averaged 23 points, 9.2 rebounds, 6.6 assists and 3.9 steals as a junior…2018 first team all-state and USA Today All-Arizona selection…Three-time first team all-region selection…2018 region player of the year…Named 2017 MVP of the Tournament of Champions…Twice been selected to compete in the adidas Uprising All-American Camp…Ranked as the No. 27 guard in the country according to ESPN.