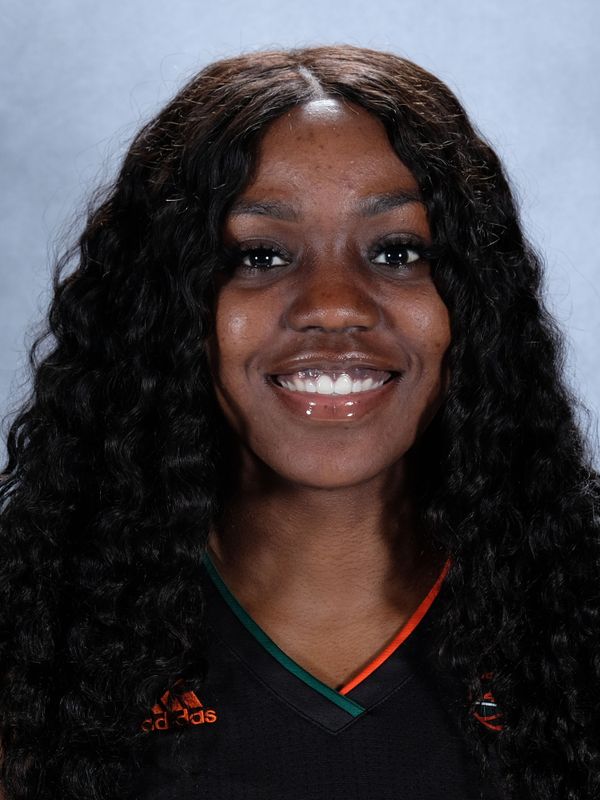 Started 14 of 17 games played in her final season with the Canes…Missed 13 games due to an acute foot injury…Shot a team-best 52.1 percent from the field (110-of-211)…Led the Canes in both scoring (16.8) and rebounding (9.8)…Totaled nine double-doubles (tied for eighth most in the ACC)…Recorded double-digits in 16 of 17 games played…Eclipsed the 20-point mark in four games…Reached the 1,000-rebound mark this season, becoming the 13th active NCAA Division I women’s basketball player to reach 1,000 career points and 1,000 career rebounds…Finished the season ranking in the top 10 in five in the ACC in five statistical categories: first in rebounding (9.8), second in offensive rebounding (3.17), fifth in scoring (16.8), sixth in blocked shots (1.41) and seventh in field goal percentage (.521)…Recorded a double-double on Senior Day against Pitt (3/1), tallying 13 points and 10 rebounds in 15 minutes of action…Finished non-conference play on a high-note, posting season highs in rebounds (19) and blocks (five)… Recorded three double-doubles in five days to earn ACC Co-Player of the Week (12/22) …Set a new career high in scoring (31) and made field goals (12) at DePaul (11/23)…One of eight ACC players to eclipse the 30-point mark this season… Named ACC Co-Player of the Week (11/25) after averaging 24.5 points and 13.0 rebounds and earning a Maggie Dixon Classic All-Tournament Team nod.

As a Junior (2017-18): Transferred from Baylor University … Sat out season due to NCAA transfer rules.

As a Freshman at Baylor (2015-16): Big 12 All-Freshman Team (unanimous) … Two-time Big 12 Freshman of the Week (12/28/15, 3/3/16)
One of five Lady Bears to play in all 38 games … Earned 26 starts, including each of the final 22 … Scored in double figures nine times, including 15-plus on five occasions … Grabbed double-digit rebounds in five outings, recording 15-plus twice … Tallied four double-doubles … Notched three-plus blocks 10 times … Co-led the team in rebounds (6.1) and offensive rebounds per game (2.3), as well as placed second in defensive rebounds per game (3.9) … Also paced Baylor in blocked shots (60) … Ranked fourth in field goal percentage (53.5), field goals made (116) and free throws attempted (101), as well as fifth in points per game (7.2) and steals (25) … Posted eight points and six rebounds in 14 minutes in her college debut against UT Arlington (11/13) … Notched nine points, seven boards and her first two collegiate blocks and steals versus Southern Miss (11/16) … Tallied a co-season-best four assists versus Cincinnati (11/26) … Registered 12 points of 6-of-7 shooting to go along with seven rebounds against Northwestern State (12/4) … Posted co-season-highs in points and field goals made against Grambling State (12/6), finishing with 18 points on 8-of-11 shooting and adding eight rebounds … Recorded her first double-double with 15 points and 13 boards in her opening start against McNeese State (12/13), going 7-of-9 from the floor and posting a trio of both assists and blocks … Playing against No. 23/21 Miami (12/19), had five points and seven rebounds … In a co-season-high 26 minutes versus James Madison (12/21), tallied 14 points and a season-best 17 rebounds … Logged 10 points and seven boards at Oklahoma State (12/30) in her first conference game … Scored a season-high-tying 18 points on a co-season-best eight made field goals against TCU (1/9) and set a season high with 13 free throw attempts … Registered 16 points and 15 rebounds at No. 24/RV West Virginia (1/30) and set or tied season highs in minutes (26), field goals made (eight) and field goal attempts (15) … Notched 14 points and 12 rebounds against Kansas (2/6) and made a season-best four free throws on five attempts … Set a season high with five blocks in the win over No. 17/24 Oklahoma State (2/17) … Finished with nine points and nine rebounds at No. 20/21 Oklahoma (2/22) … Against No. 6/8 Texas (2/29), notched nine points, 10 rebounds and three blocked shots … Tied a season high with four assists in the Big 12 Tournament quarterfinals versus Texas Tech (3/5) … Blocked four shots in the semifinals in a win over No. 24/22 Oklahoma (3/6) … Tallied 15 points on 6-of-10 shooting and added nine boards versus seventh-ranked Texas (3/7) to help the Lady Bears win the conference title … Started all four of Baylor’s NCAA Tournament games.

High School: Graduated from Miami Senior High School … Started in the McDonald’s All-American Game and also made the Jordan Brand Classic … Ranked as a four-star prospect and the No. 11 player in the country, including third-best post recruit and top Floridian, by ProspectsNation.com … Tabbed by espnW HoopGurlz as a five-star recruit, the No. 20 overall prospect, third-ranked post player and second-best Floridian … Helped the USA to a FIBA U18 Americas Championship gold medal in 2014 … Played in all five games in the tournament, averaging 9.0 points and 5.4 rebounds, shooting 58.1 percent from the field, fourth-best among all players …  Two-time Florida Gatorade Player of the Year, three-time first team all-state pick and the 2015 Miss Florida Basketball honoree … Two-time South Florida player of the year and three-time Miami Herald First Team All-Dade selection … Named the Miami Herald All-Dade 8A-6A Girls’ Athlete of the Year as a senior, becoming the first Miami High athlete to win the award in any classification … Also tabbed as the 8A-6A Player of the Year as a senior … Garnered 8A state tournament MVP honors and USA TODAY Florida Player of the Year recognition as a junior … Won back-to-back 8A state titles to conclude her career after finishing as the runner-up her sophomore season … Averaged a double-double all four years … Posted 25.2 points, 15.2 rebounds, 5.0 blocks, 3.5 steals and 2.6 assists per game as a senior, shooting 63.2 percent and helping the team finish 29-3 … As a junior, logged 14.2 points and 13.6 rebounds per outing, as the team went 31-1 … Averaged 11.9 points and 14.5 rebounds per game in a 25-7 campaign as a sophomore … Tallied 10.5 points and 13.5 rebounds per game her freshman year … Also competed in volleyball and cross country … Volunteered as a youth basketball instructor and scorekeeper with the school’s special education program, as well as with Key Club International and Kiwanis International … Among the many notable Miami High alumni are former University of Miami stars Eddie Brown, Doug Edwards, Andre Johnson, Gardnar Mulloy and Roscoe Parrish, basketball coaches Anthony Grant and Frank Martin, Udonis Haslem of the Miami HEAT, former Atlanta Falcons defensive coordinator Marquand Manuel, 1953 American League MVP Al Rosen, Pulitzer Prize-winning poet Donald Justice and 18-year U.S. Senator George Smathers.

Personal: Full name is Beatrice Mompremier … Name is pronounced BEE-Uh-Triss MOM-Prih-Meer … Nickname is “B” … Born Aug. 8, 1996 … Parents are Madilien Mompremier and Marie Claude Edouard … Has three older brothers, Clifford, Wadly and Claudy, a younger brother, Rodney, and a younger sister, Marilyn … Wadly played basketball at Ohio and Arkansas-Little Rock … Majoring in economics … Enjoys singing, reading comic books and doing yoga … Speaks Creole … Favorite athlete is Chris Bosh because he is a great athlete and she would like to expand her game like his … Best sports memories are winning two state titles in high school …Chose Miami because of the environment, the proximity to home and the quality of business school … Committed to Miami over Florida State.