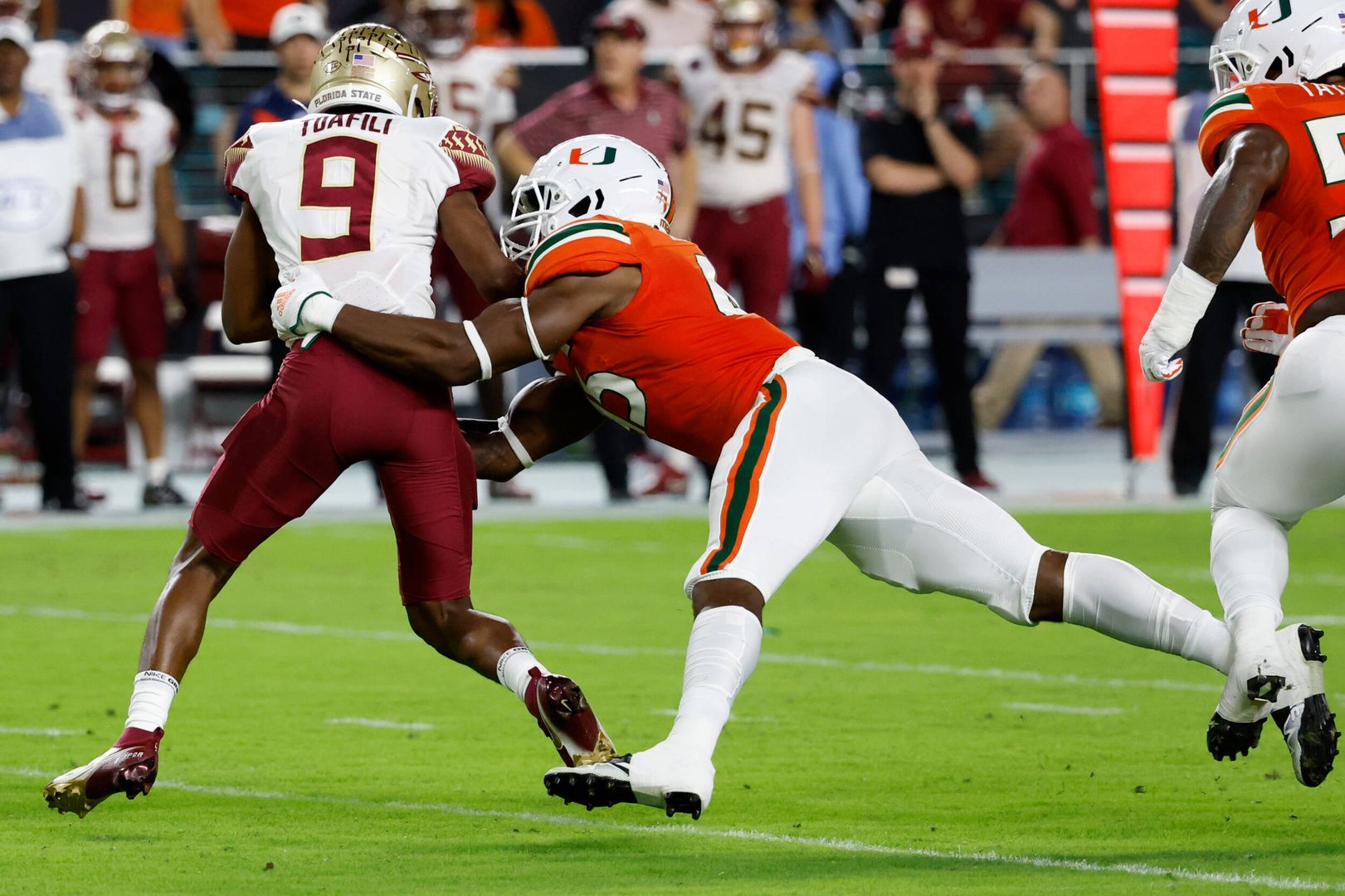 MIAMI GARDENS, Fla. – There was, just before kickoff, a buzz in the air at Hard Rock Stadium.

A sellout crowd. A prime-time showdown in front of a national TV audience. A stage befitting the latest installment of the Miami-Florida State rivalry, a game that has featured legendary players on both sides and that is eagerly anticipated by both fan bases every year.

Unfortunately for Miami, Florida State jumped to a 21-3 lead early in the second quarter and never looked back in what was ultimately a 45-3 win for the visiting Seminoles.

It was a performance that understandably, left Miami head coach Mario Cristobal and the Hurricanes visibly frustrated, particularly given the number of fans that packed the stadium and tried to give the Hurricanes a boost in an emotionally-charged game.

Here, more takeaways from the Hurricanes after their game against Florida State…

Ahead of their matchup against Florida State, the Hurricanes faced Virginia and picked up a 14-12 win after four overtimes. But none of those points came via a touchdown.

Instead, four Andy Borregales field goals and a 2-point conversion from quarterback Jake Garcia accounted for all of Miami’s scoring in Charlottesville.

The Hurricanes’ offensive woes continued against Florida State, their lone score coming off a season-long 49-yard field goal from Borregales.

It’s an issue Cristobal said Miami has to find ways to fix.

“We have to find ways. We have to tweak stuff. We have to find ways to produce,” he said. “Obviously we came in here with a plan. I think [offensive coordinator [Josh] Gattis runs a great offense. It ran really well at Michigan and was very successful in the things he was involved with at Alabama. We’re not there yet, from a development standpoint. So we have to find ways to generate yards, first downs and points. We’re trying to uncover every stone to try to do that, and we haven’t. It starts with the run game.”

Quarterback Tyler Van Dyke, who missed the Virginia game because of an injury, returned to action on Saturday against the rival Seminoles, but wasn’t able to finish the game.

With Van Dyke out, both Garcia and freshman Jacurri Brown saw playing time, with Brown leading the offense in the second half.

Brown completed 5 of 9 passes for 37 yards with an interception and had a team-high 64 rushing yards.

“We felt like he could throw the ball well. We felt a combination of him, making them respect the quarterback run and trying to get the running game going, would give us a chance to work our way into the game,” Cristobal said of Brown’s performance. “We weren’t getting the type of production in the running game that we thought could put us in second-and-manageable and third-and-short. A couple times, early in the game, we got stopped on a third-and-short and ended up punting around the 29-yard line. Those are the things we thought we could generate with him in there. We didn’t do it to the level we thought we could.”

Miami’s defense kept Virginia out of the end zone last week but struggled to do the same against a Florida State team that entered the night averaging 275 passing yards and 200 rushing yards per game.

The Seminoles practically matched those numbers Saturday, totaling 229 rushing yards and 225 rushing yards. They also had multiple big plays, including a 56-yard touchdown pass for the game’s first score.

“Big plays,” Cristobal responded during his postgame press conference when asked about Miami’s defensive struggles against Florida State. “We played counter really well [this season]. They ran counter right up the gut and we didn’t stop it very well. A big part of it was tackling. Another part of it was being able to spill the first puller, hold the point of a double team, and then just getting in there. We’ve done really well all year, we’ve been able to stop the run. We didn’t do those things, technically, well enough.

“Obviously we need to teach it better. Call it better. All those things that go with it. I thought we had a chance to get off the field right away to start the game, and we got hit with a pass interference. They came back with a counter-pass and threw it over the top for a big play. Big plays were the story. I think they had five plays for over 240 or 250 yards. We have to work to do. We have to build. We have to build. I knew it, but we have to build. Stuff like this, it just ain’t it.”

The Hurricanes have, at times this season, dealt with issues like penalties and turnovers.

Both played a factor against Florida State.

Miami was whistled nine times for 72 yards, with some of those penalties erasing would-be positive plays for the Hurricanes. On the Seminoles’ opening drive, for example, a pass interference penalty on third down extended FSU’s drive. Two plays later, the Seminoles scored.

On FSU’s ensuing drive, the Seminoles were in another 3rd-and-long when the Hurricanes were penalized again for pass interference. That, too, extended the FSU drive and resulted in a touchdown.

Miami also turned the ball over four times, with the Seminoles scoring 14 points off those turnovers.

“Obviously a poor performance by our program. As a head coach, you have to take responsibility for that,” Cristobal said. “Our entire program has to take it head-on and go back to work, and build. That’s where we are. We all have work to do.”

5. On to Georgia Tech

The Hurricanes have three games left on the regular-season schedule, with two of those coming on the road. The first of those comes Saturday against a Georgia Tech team that has struggled at times this season, too.

The game is set to kick off at 3:30 p.m. from Bobby Dodd Stadium in Atlanta and in the days ahead of that matchup, Cristobal said Miami will continue to try and find ways to improve.

His hope is that with each game and each experience Miami has had this season, the Hurricanes are learning how to continue their growth.

“I very well knew what we had to do here, and we had to go to work. That’s the bottom line,” Cristobal said. “That’s how we approach it, and that’s what we’re doing.  They’re all learning lessons, use every bit of it. Good and bad.”