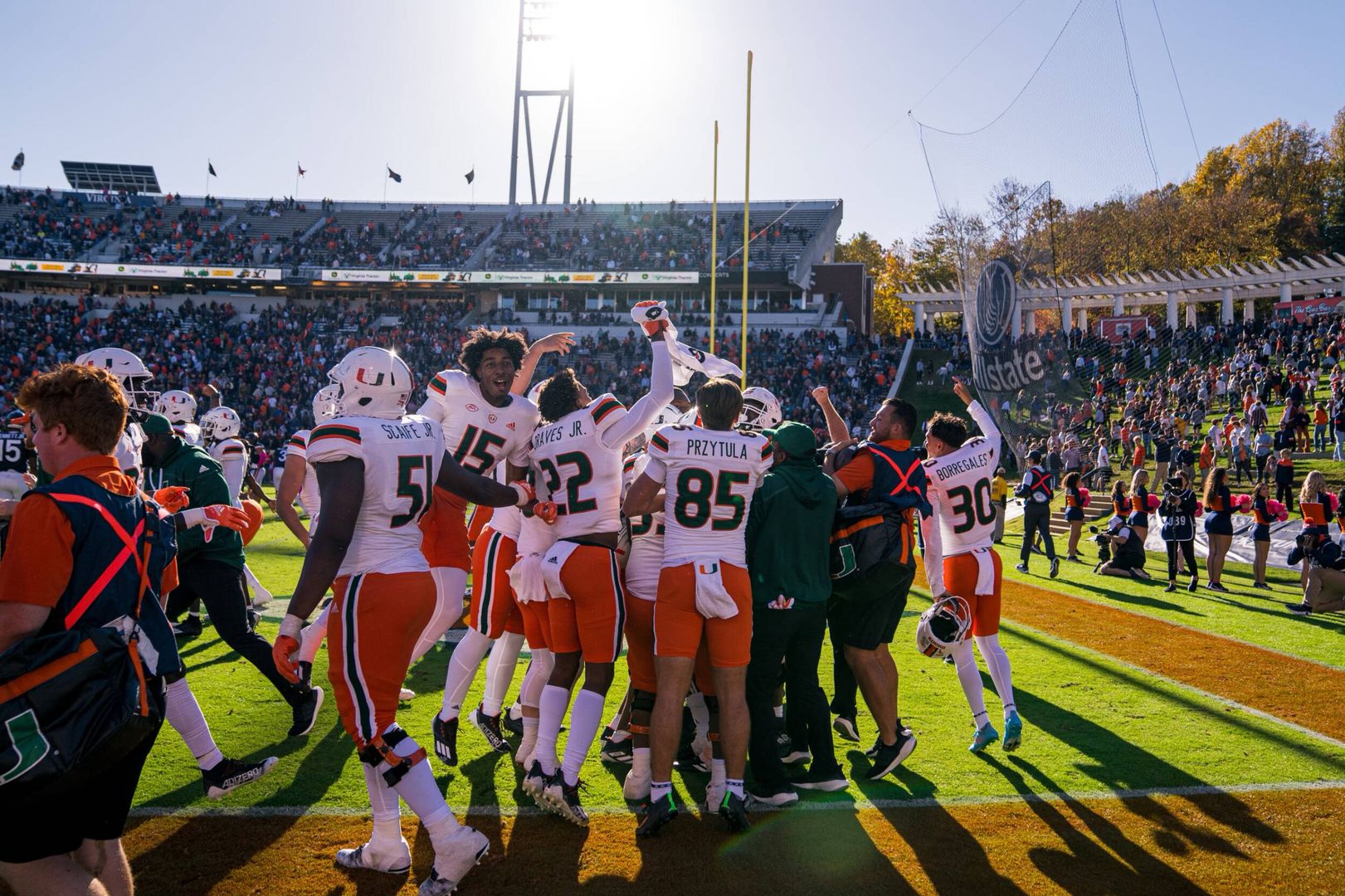 Fourteen punts sailed through the crisp autumn air. Four field goals split the uprights. But thanks to defenses that were stingy and stout each team only had a six on the scoreboard.

And that somebody was quarterback Jake Garcia, whose three-yard rush around the right end in the fourth overtime gave Miami a thrilling, 14-12 win over Virginia Saturday before a crowd of 43,714 at Scott Stadium.

Miami’s defense not only kept the Cavaliers out of the end zone with some key red zone stops in regulation and overtime but the Canes racked up five sacks and 11 tackles for loss. It was a gutsy performance that head coach Mario Cristobal heralded postgame.

“I can’t say enough about the resiliency of the team,” he said. “Just really proud of our guys for effort, for toughness and for playing hard the whole way through.”

Andres Borregales hit all four of his field goal attempts, connecting from 38, 20, 42 and 37 yards. Running back Henry Parrish, Jr. rushed for 113 yards on 24 carries. Garcia completed 15 of 29 passes for 125 yards, while wide receiver Colbie Young caught five passes for 46 yards.

The first 10 possessions of the game resulted in 10 punts. But after the 10th punt, Miami took over at its own 45. Two plays later Garcia hit Young down the right sideline for 23 yards – the longest gain for either team in the first half. The drive stalled at the Virginia 20 but Borregales nailed a 38-yard field goal on the last play of the half to give Miami a 3-0 heading into the locker room.

The Canes held the Cavaliers to just 96 total yards and four completions in the first half, sacking Armstrong three times. 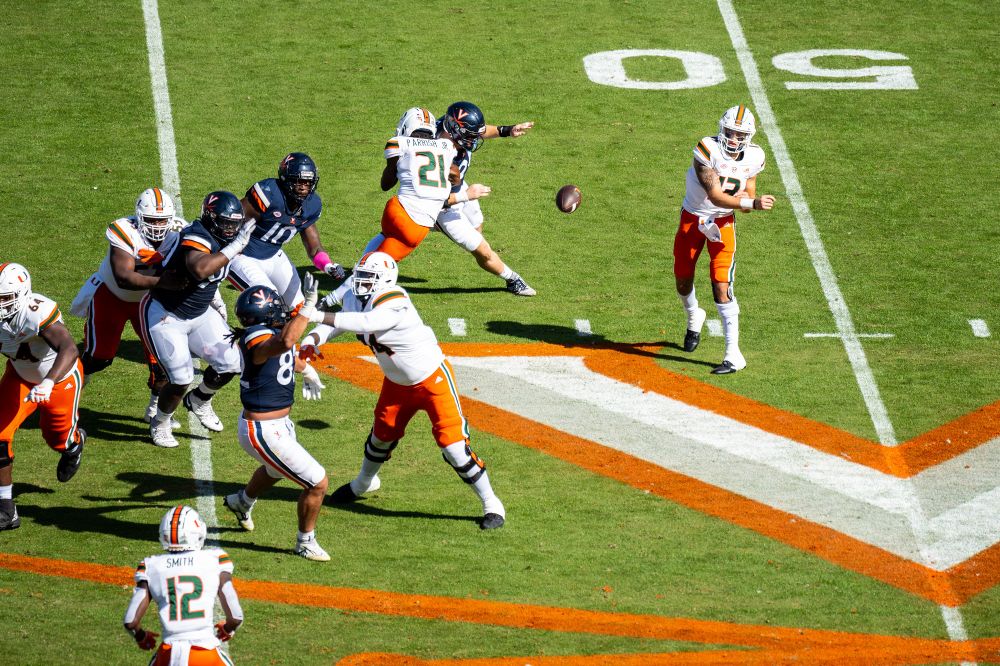 On its opening possession of the second half Virginia faced a 3rd and 15 from its 20 but Armstrong connected with wide receiver Keytaon Thompson for 30 yards. On the next snap Armstrong found wide receiver Lavel Davis for 47 yards down to the Miami three-yard line.

But the Canes’ defense held firm and forced a 27-yard field goal by Will Bettridge that tied the game at 3-3.

After another Miami punt Virginia faced another key third and long at its own 33. Armstrong ducked pressure and found running back Mike Hollins out of the backfield for 64 yards – the quarterback’s longest completion of the season. But the Canes’ defense again held strong. First and goal at the one-yard line became fourth and goal at the one-yard line. And when Armstrong’s pass bounced off tight end Grant Misch’s hands, Miami had the ball back with 3:53 left in the third quarter.

The Cavaliers forced a punt and Armstrong went back to work, scrambling 18 yards to the Miami 36 before finding wide receiver Billy Kemp IV for a juggling, 11-yard catch. After a 13-yard run by running back Perris Jones Virginia was back in the red zone. And the Canes stood tall again as the Cavaliers had to settle for a 24-yard field goal by Bettridge.

On Virginia’s next drive defensive end Jared Harrison-Hunte sacked Armstrong for a seven-yard loss, forcing the Cavaliers to punt again. The Canes got the ball back at their own 45, trailing by three with 5:29 remaining.

Garcia found wide receiver Brashard Smith across the middle for 12 yards. Then on 3rd and 4 from the Virginia 36 Parrish churned for six yards and a first down. That was the first of eight straight running plays, which concluded with a fourth and goal from the Virginia 2. Borregales booted it through the uprights from 20 yards out on the final play of regulation and the game ventured into overtime.

Miami got the ball first in the extra session but could only muster one yard before Borregales trotted out again to coolly nail a 42-yarder. The Canes were back in front 9-6.

Virginia faced a 3rd and 5 from the 20 and Taylor sacked Armstrong, forcing Bettridge to try a 41-yard field goal. He connected as well, and the game continued.

The Cavaliers got the ball right back but safety Kamren Kitchens broke up a pass on 3rd and 9. Bettridge returned to the field and connected again from 41 yards out – this time with assistance from the left goalpost. Miami trailed 12-9 but now had a chance to win with a touchdown. But the Canes were stopped at the 19-yard line. Borregales hit from 37 yards out and a third overtime ensued.

“(Borregales) does it in practice all the time,” Cristobal said. “He’s unfazed.”

Garcia was picked off by safety Antonio Clary on Miami’s first two-point try. Virginia then lined up for two and committed a false start. Armstrong lofted a pass to Dontayvion Wicks but Stevenson broke it up in the back corner of the end zone. Armstrong followed with another incompletion, and it was Miami’s turn again.

Garcia faked a handoff up the middle, ran right and eyed the pylon — diving across the end zone to lift the Canes to victory.