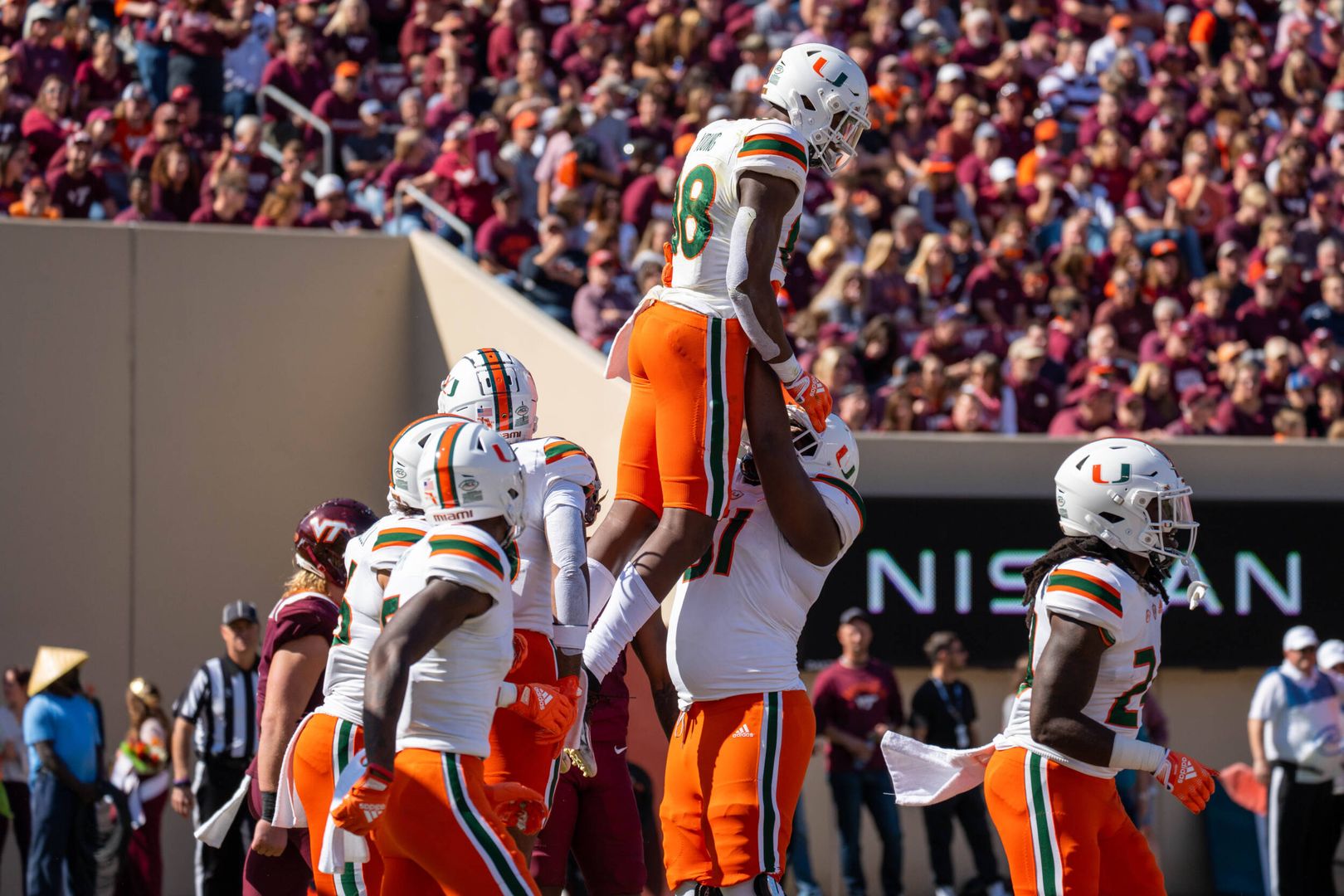 BLACKSBURG, Va. – Virginia Tech was off to a difficult start this season but that didn’t stop fans from packing Lane Stadium on a postcard fall Saturday. The famous “Enter Sandman” intro was just as loud, lively and bouncy as ever.

But it’s the Hokie faithful who might be gripping their pillows tight tonight. Visions of Tyler Van Dyke shredding your secondary and Miami’s defense wreaking havoc in your backfield can have nightmarish effects.

The Canes dominated the first three quarters in Blacksburg and then held on to defeat Virginia Tech 20-14 before a sellout crowd of 65,632. Miami improved to 3-3 overall and 1-1 in the ACC. The Hokies dropped to 2-5 and 1-3 in conference play.

“Started out very strong,” head coach Mario Cristobal said. “Proud of the way we came out. Came out with purpose. Came out with conviction. Really executed at a high level and as some of the guys started getting banged up, we started having issues with execution, particularly penalties…At one point in the game, we were playing without our two starting tight ends, without three starting offensive linemen, without our three starting wide receivers.

“Tremendous credit to the players for fighting hard and doing what they did to find a way to win a football game on the road.”

The Canes executed in all three phases to stop a three-game losing streak. Van Dyke was again terrific at quarterback, leading an offense that amassed 458 total yards. He completed 29 of 46 passes for 351 yards and two touchdowns. He also converted two key third downs on Miami’s final drive to seal the victory. It was Van Dyke’s eighth career 300-yard game and he connected with eight different receivers.

One of those receivers was Colbie Young , who had a breakout game with nine catches for 110 yards and one touchdown. Young entered the game with just three career grabs and one score. Tight end Will Mallory had three catches for 62 yards and wide receiver Brashard Smith added six receptions for 76 yards.

“(Tyler’s) preparation has really gone up another level and he’s also affecting the guys around him,” Cristobal said. “Talented guy. Obviously, a lot of moving parts around him with the injuries.”

Miami’s defense held the Hokies to 257 total yards and racked up six sacks, led by defensive end Akheem Mesidor , who had eight tackles and 3.5 of those sacks. Safety Avantae Williams had a fumble recovery to set up the Canes’ first touchdown. Virginia Tech fumbled on its opening drive and averaged less than 12 yards on its next eight drives before scoring two touchdowns in the last quarter.

Hokies quarterback Grant Wells threw for 179 yards with one passing and one rushing touchdown. But Virginia Tech managed just 78 rushing yards and couldn’t muster any scoring until the final quarter. The Canes did commit 17 penalties, which helped keep Virginia Tech in the game late.

“For us, it’s simple,” Cristobal said. “You’re at a place because either things went really well and someone moved on or you’re at a place because things didn’t go so well and there’s change. When there’s change, there’s pains that come with it. No one likes to lose a game or two. But you also recognize, ‘What are the steps that have to be taken? Where do we have to get better?’ There’s progress in a lot of places and some we have to keep developing talent. Some is talent acquisition.

“But this whole thing today, honestly, it’s about the players in that locker room. Everything has to be about the players, the way they prepared, the way they overcame injuries…and to be on the road and still find a way to win, those guys in there deserve all the credit. They deserve all the credit. They deserve praise for it.”

On the Hokies’ first drive Wells hit wide receiver Dae’Quan Wright in stride for a long gain but cornerback DJ Ivey stripped the ball away and it was recovered by Williams at the 35.

Van Dyke wasted no time marching the Canes down the field, hitting Smith for a 30-yard gain on Miami’s first offensive snap. Two plays later the quarterback lofted a throw down the right sideline to Young, who made a gorgeous catch for 37 yards to the Hokies 5. On the next play Van Dyke hit wide receiver Frank Ladson, Jr. in the back of the end zone and just like that the Canes were up 7-0.

Miami’s defense forced a three-and-out and the Canes got the ball back at their 19-yard line. Van Dyke picked up a key 3rd and 6 with a 14-yard completion to Mallory to cross midfield. Thanks to two holding penalties the Canes found themselves facing a 2nd and 26 but Van Dyke found Mallory again for 28 yards to the Hokies 26. Tech’s defense eventually held but Borregales hit from 28 yards out to give Miami a 10-point lead, capping off an 18-play drive.

After forcing two more Hokies punts Van Dyke engineered an eight-play, 80-yard touchdown drive, capping it off with a 17-yard laser to Young in the back of the end zone. Miami’s lead was 17-0 with 5:28 to play in the first half.

Miami ended the half with a 302-106 advantage in total yards, holding Virginia Tech to just 3.8 yards per play.

After forcing two consecutive three-and-outs to start the second half the Canes drove into the red zone but were forced to settle for another Borregales field goal, this one from 25 yards out. Miami’s lead was 20.

The Hokies’ offense got going to start the fourth quarter as Wells gained 29 yards on two scrambles, moving the ball to the Miami 10. Three plays later Wells found running back Malachi Thomas open in the left flat for 14 yards and Virginia Tech’s first score of the day. The Canes’ lead was trimmed to 20-7 with 12:10 left.

The Hokies forced a three-and-out and again marched again down the field, converting a 4th and 9 from the Miami 19 along the way. Wells rushed in from three yards and suddenly the lead was just six points with 3:20 left.

But Van Dyke wouldn’t let Virginia Tech get any closer. Van Dyke converted a 3rd and 18 with a 15-yard pass to Ladson. Then on 3rd and 6 from the Miami 46, he faked the handoff and rushed nine yards for the game-clinching first down.

Mario Cristobal meets with the media after Miami's win at Virginia Tech.