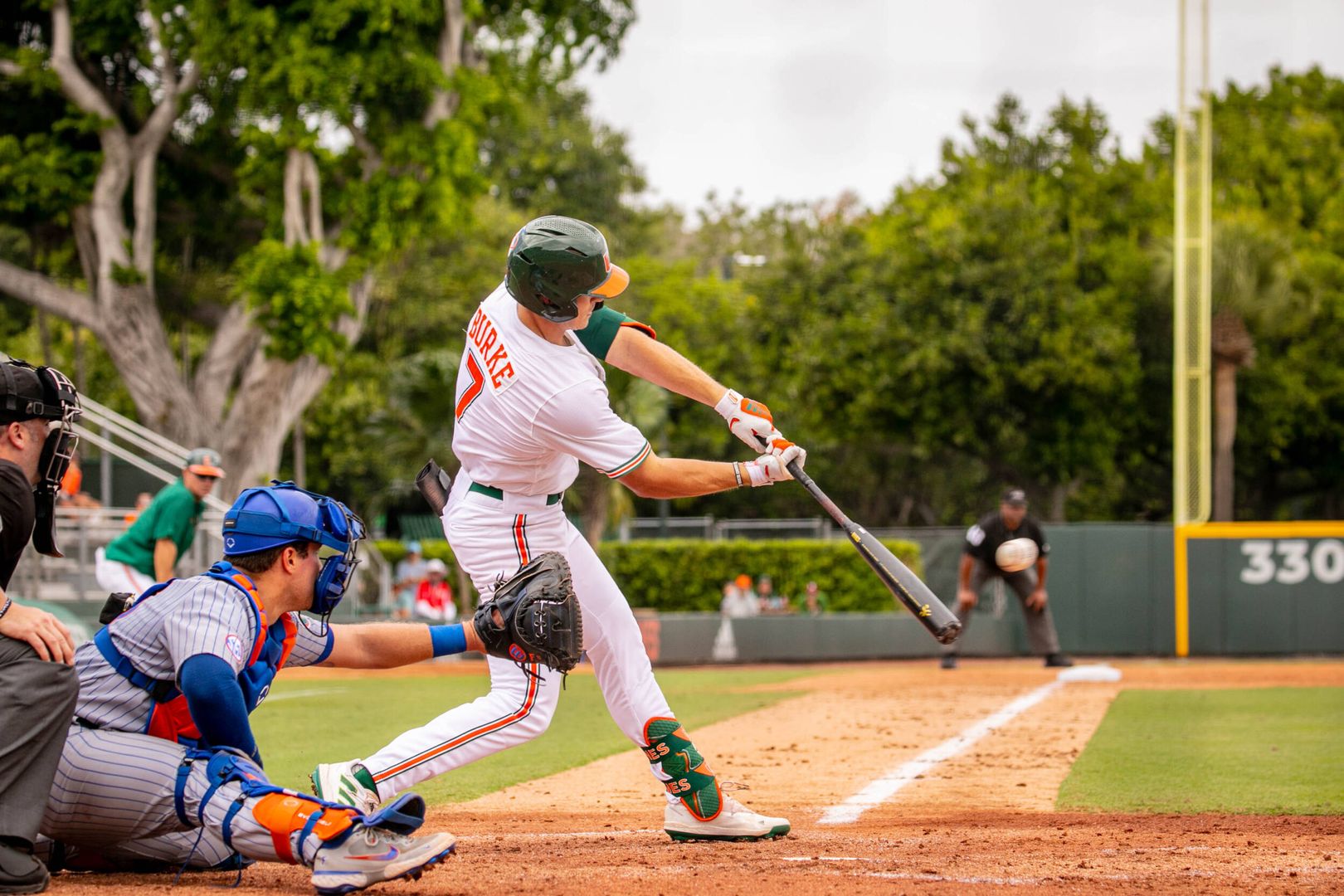 CORAL GABLES, Fla. — After splitting the first two games of the series, the No. 22 Miami Hurricanes fell to the 14th-ranked Florida Gators, 11-3, Sunday afternoon at Alex Rodriguez Park at Mark Light Field.

“Well, just a disappointing loss to say the least. We didn’t do anything very well starting on the mound.” Miami head coach Gino DiMare said. “You walk 14 guys that’s not a formula for success. We fell behind there 7-1 and it felt like we weren’t giving very good at-bats.”

“We gave them opportunities with the 14 free passes, you just can’t do that,” DiMare said. “The game just got away from us.”

Florida raced out the gates in the series finale, totaling three runs in the first frame.

Second baseman Colby Halter led off the matinée with a base hit, extending his hitting streak to 15 games, dating back to last season. Center fielder Jud Fabian followed with an RBI double, putting the Gators ahead, 1-0.

With two on and nobody out, Florida catcher BT Riopelle laid down a sacrifice bunt, pushing both runners into scoring position. Shortstop Josh Rivera plated Thompson from third with a sacrifice fly, capping off the three-run first frame.

Rivera cushioned the Gators’ advantage in the third, bringing home Fabian with a groundout.

Miami left fielder Jacob Burke responded with an RBI single in the bottom half, cutting the deficit to 3-1, but the Hurricanes wouldn’t get any closer.

Florida tacked on three runs in the sixth and four over the final two frames to put the game out of reach.

“Friday’s brand of baseball is what we know we are capable of,” Burke said. “The bottom line is we just didn’t play the same brand of baseball the last few days. Credit to Florida, they played well, they came back and I think they wanted it a little more than us. This isn’t everything, it’s one series in a long season.”

Right-hander Blake Purnell (2-0) was credited with the victory after pitching 3 2/3 shutout innings in relief.

“I feel like all their pitchers this weekend just came out and attacked the zone,” Burke said. “They had good stuff, but I think we’re capable of a lot more and we didn’t really show that the last few games.”

Next up, Miami hits the road for the first time this season, traveling to face crosstown foe FIU. First pitch is scheduled for 7 p.m. Tuesday at FIU Baseball Stadium.

“We better turn the page very quickly,” DiMare said. “We have a day off tomorrow, but we got to be ready to go Tuesday.”