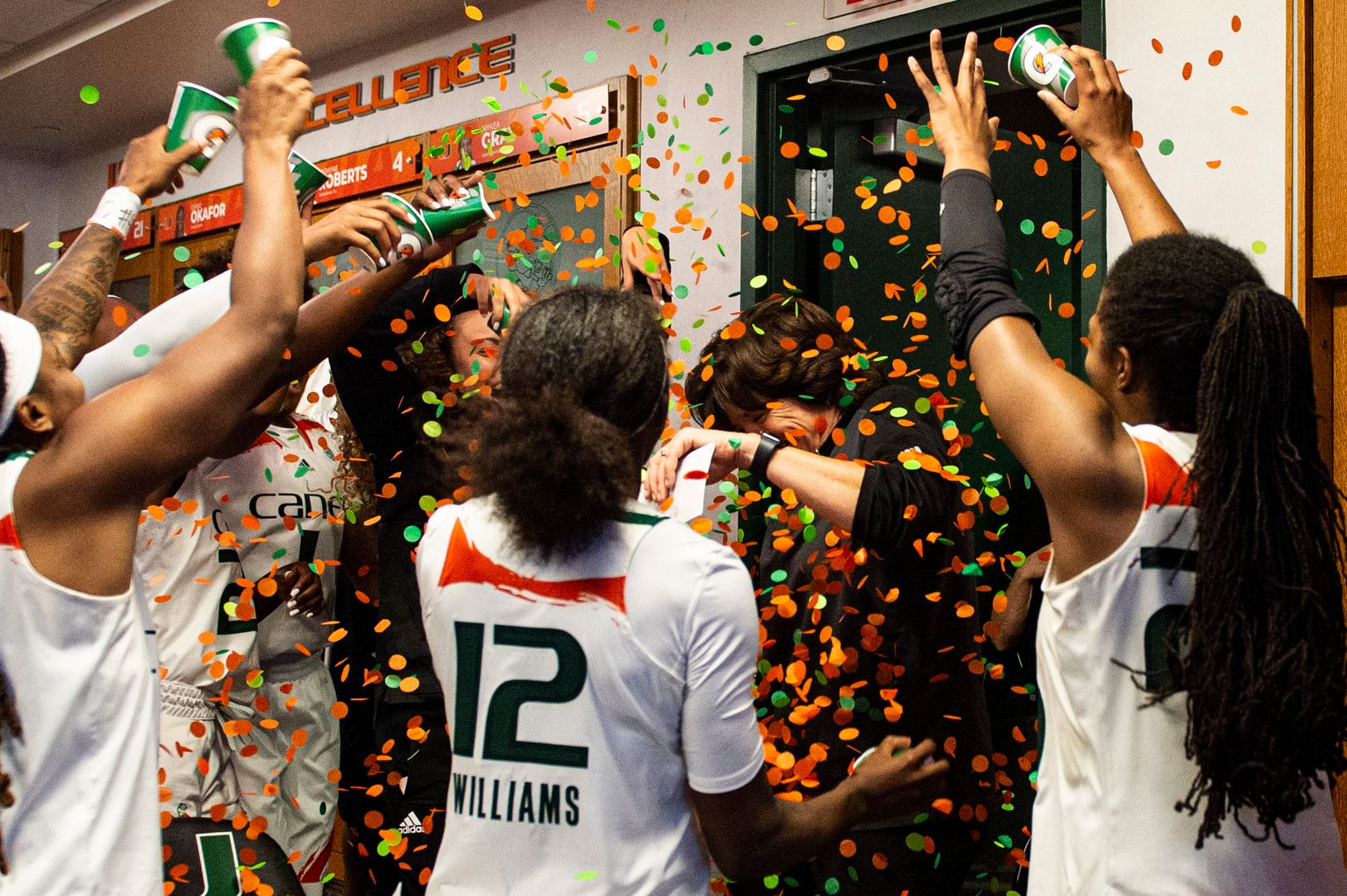 Then-senior Kelsey Marshall kicked off 2021 by becoming the 29th Cane in program history to reach 1,000 career points. Marshall totaled 19 points at North Carolina, reaching the milestone on a 3-pointer at the 6:51 mark in the fourth quarter. She has continued to move up the record books in scoring and currently sits in 17th all-time in scoring at Miami with 1,278 career points.

The month of February was highlighted by head women’s basketball coach Katie Meier’s 300th win at Miami. The victory was all the sweeter as it came against ACC rival Florida State, with Miami emerging victorious, 68-53, at the Watsco Center. Meier is one of just two coaches in Miami women’s basketball history to reach the 300-win mark, alongside fellow Miami coaching legend, Ferne Labati.

Miami’s 2020-21 season came to a close during the first week of March, but not before then-redshirt-junior Destiny Harden posted the best performance of her career. Harden led all players in scoring with a career-high 27 points in the contest. Harden added 11 rebounds and three assists to her stat line for her fourth double-double of the season. The forward was tabbed ACC Player of the Week following her performance and also earned All-ACC Academic Team honors that same week.

For two Miami women’s basketball players, the month of April brought an exciting new competitive opportunity. Then-junior Naomi Mbandu and then-sophomore Moulayna Johnson Sidi Baba both joined the Miami soccer team for a week to help out the short-handed Canes. Mbandu started Miami’s final match of the season against Florida, tallying two saves and allowing just two goals. While she was making plays in net, the entire women’s basketball team was on the sidelines, cheering her on.

The second week of May was special for three Canes as Endia Banks, Destiny Harden and Kelsey Marshall all earned their undergraduate degrees from the University of Miami. Banks and Marshall both earned a Bachelor of Science in Education, while Harden received a Bachelor of Arts degree. Harden and Marshall returned to Miami for the 2021-22 season to pursue advanced degrees.

June brought with it a slew of new faces to the Miami women’s basketball program. Four new Canes arrived on campus in June – Lashae Dwyer, Lola Pendande, Jasmyne Roberts and Ja’Leah Williams. The newest Canes put in countless hours in the gym and in the weight room over the summer to find their place in the Miami system.

Get to know the DRIP coaches HERE.

August means all the student-athletes are back on campus and the first day of classes is here. The Canes take their classwork seriously with five Miami players appearing on the 2020-21 ACC Academic Honor Roll. This year, three Canes – Maeva Djaldi-Tabdi, Destiny Harden and Kelsey Marshall – are pursuing graduate degrees, while the other 11 are participating in various undergraduate programs, including sports administration, broadcast journalism, business and exercise physiology.

Preparation for the 2021-22 got serious on Sept. 28 when the Canes participated in their first official practice of the season. The 2021-22 team features a mix of old and new with eight veterans and six new players. Among the new faces are four freshmen and two transfers, while Mykea Gray and Kelsey Marshall returned for a fifth season.

The Canes entered October one month closer to the beginning of the 2021-22 season. Head Coach Katie Meier, graduate student Kelsey Marshall and senior Mykea Gray all made the trek up to Charlotte, N.C., to participate in ACC Media Day on Oct. 13. The trio spoked with the media about the revitalized Miami team and what could be expected during the 2021-22 season.

December is a month for celebrating and the Canes did all that and more when sophomore Paula Fraile Ruiz took the court for the first time as a Cane on Dec. 12. Fraile Ruiz battled a heart condition following a bout with COVID-19 and worked her way back to playing for the first time in over two years. When she took the court, the bench and arena erupted in cheers, making the moment a special one for the forward.