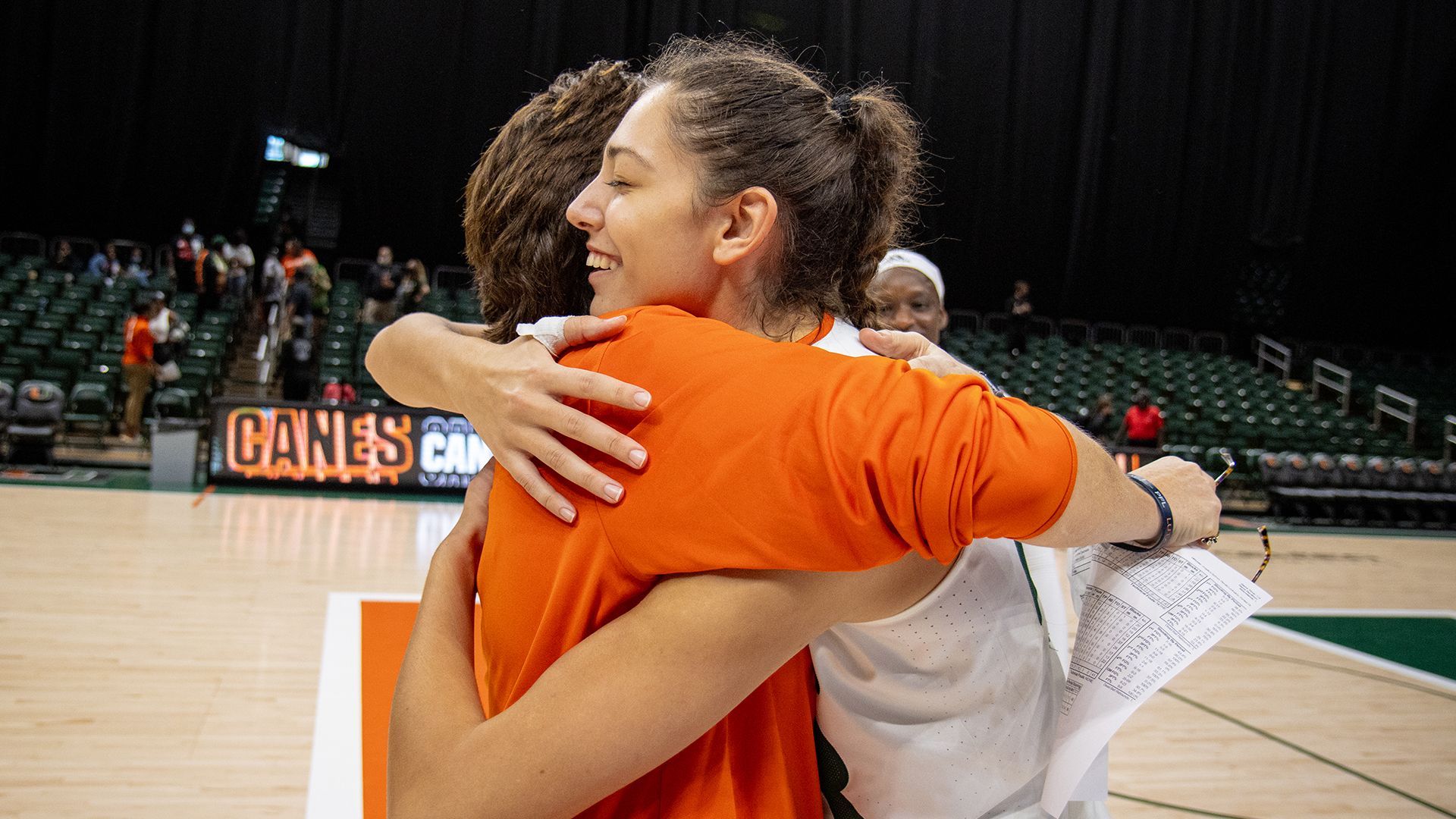 CORAL GABLES, Fla. – As she walked to the scorer’s table, her coach had some questions.

“I think I held her hand and I was like, ‘Are you okay? Are you ready for this?” Hurricanes head women’s basketball coach Katie Meier recalled with a smile. “But she was great.”

Paula Fraile Ruiz was more than great, it turned out. More than ready, too.

After 22 months away from the game she’d loved since her childhood, Fraile Ruiz made her Hurricanes debut during the second quarter of Miami’s 86-45 win over Robert Morris earlier this month.

It took her all of 31 seconds to notch the first points of her Miami career – a second-chance layup that pushed the Hurricanes’ lead to 21 points and set off an emotional celebration.

“When she scored that first basket, there wasn’t a dry eye,” Meier said. “I was choked up. My team was choked up. We were all jumping up and down. She’s really good.”

The hope now is that Fraile Ruiz will only build on that very special, very memorable moment.

A sophomore from Spain, she arrived at Miami in 2020 with big dreams, even as the world grappled with the effects of the COVID-19 pandemic.

After enduring lockdowns in her home country and even battling the virus herself that summer, Fraile Ruiz hoped her decision to play basketball an ocean away from family and friends would help pave the way for her to earn the college degree she’d long wanted.

But the results of a routine preseason physical quickly cast doubt on her budding career.

Before the 6-foot-4 forward could even take the floor for her first practice as a Hurricane, doctors discovered she had myocarditis as a result of her bout with Covid months earlier.

While the diagnosis was scary, for a moment, it gave Fraile Ruiz a bit of clarity.

“Before that, I had been feeling really, really sick for like three weeks,” she said. “You never think it’s going to be something like that, though. I was away from home. I was living on another continent, joining a new team. At some point, I thought I could be depressed and that’s why I didn’t have the energy to get out of bed. If I worked out one day, the day after, I couldn’t move. So in a way, that part was a relief.”

Once she realized, though, what had been causing her symptoms, doubt and fear crept in.

How long would she have to stay off the court? What would her life be like? Would she be able to recover fully? Was she letting down Meier and the rest of the Miami coaches who’d worked so hard to bring her to Coral Gables?

“It was really devastating,” Fraile Ruiz said. “Not even being able to practice or pass the ball to my teammates because I knew I had to recover from that was really tough. Also, I felt like I was kind of disappointing the coaches that recruited me. I hadn’t even started the season or practiced and I couldn’t play.”

The Hurricanes and her family back home did their best to provide as much support as possible.

After multiple conversations with Meier and her parents, Fraile Ruiz opted to stay in the United States and receive medical care from Miami’s team of specialists. There were stops and starts, with unexpected challenges presenting themselves as she tried to work her way back.

But Meier and the Hurricanes tried to offer as much encouragement as possible – including trying to make Fraile Ruiz smile when a recent, ill-timed ankle injury pushed her return to basketball back yet again.

“The one thing she’ll always tell you is she doesn’t quit. She just kept at it and stayed faithful. Part of the prognosis changed and the timing changed, but she just stayed faithful,” Meier said. “And then two weeks before we feel like we can ramp her up and start playing her and she gets released, she rolls her ankle. That delayed her even another week or so and I just kind of laughed with her about it. She was like ‘I’m so upset’ and I said ‘Okay, you’re going to sprain your ankle. That’s okay. You’re practicing in order to be able to sprain your ankle and be a normal athlete. This is fine.’”

Added Hurricanes forward Lola Pendande, who also hails from Spain and has become good friends with Fraile Ruiz, “I don’t know how she hung in there. It was so hard mentally. But she stuck with it…It was all so very brave and courageous from her. I don’t think I would have been able to do it. I admire her because she’s so strong.”

Finally, after a scary diagnosis, an adjusted timeline for return, an unexpected injury and an uncertain 22 months, the moment Fraile Ruiz had been waiting for finally came.

She put on her Miami uniform and took the court for the first time as a Hurricane.

Fraile Ruiz finished with four points, a rebound, an assist – and a heart full of gratitude, even as she knows there are still weeks and months of work ahead to regain her conditioning and feel as comfortable on the court as she did before her diagnosis.

“Sometimes when I have a bad day, I think how I’m really, really grateful that I’ve been able to come to another country. To get treated like this is incredible. I’m aware of all the things that I owe to Miami and everything the University of Miami has done for me,” Fraile Ruiz said. “If I was in Spain playing, I would never have known anything about this. Who knows if I would have had any problems? At some point, the decision that I took two years ago to come here has really changed my life…I just want to enjoy basketball again, feel confident and find myself on the court again. I want to do the things I was doing before this happened and actually, do it even better.”