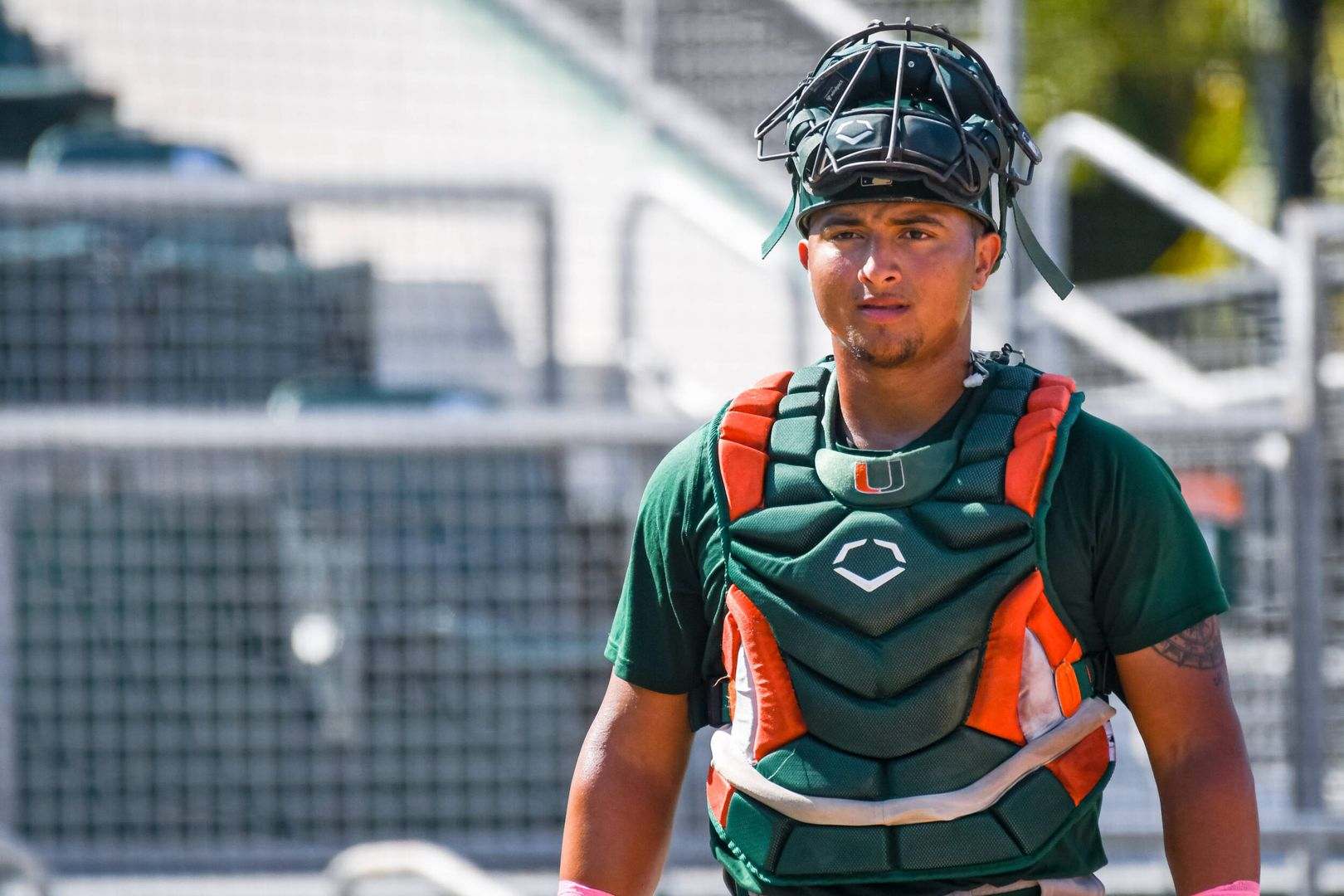 Romero Brings Omaha Experience to The U

As a sophomore at Vanderbilt, the Commodores were down to their final out in the second game of the College World Series finals and Romero stepped up to the plate.

The 6-foot-1, 218-pound backstop launched a towering home run deep into the Omaha night, landing more than 10 rows into the right-field bleachers of TD Ameritrade Park.

“It’s one of the things that I’ll never forget for the rest of my life,” he recalled. “All I remember is the one pitch and after that I just remember rounding second base. It was a blur. I’ve never been in a situation with that many people.”

Romero lived out a fantasy that every college baseball player works for as a kid.

The Miramar, Fla., native grew up watching Vanderbilt play on college baseball’s biggest stage. When he became a Commodore, he helped make that lifelong dream become a reality.

Following the 2021 season, where he batted .300 with four home runs in only 50 at-bats, Romero entered the transfer portal looking for a fresh start.

“I love the coaches at Vandy. I have the utmost respect for them. They really made me a better player,” the Pembroke Pines Charter graduate said. “When it was time to look at other options, Miami was my first choice. I haven’t looked back since then.”

Romero was one of the most sought-after players in the portal. D1Baseball ranked him the fourth-most impactful transfer in the country, the highest mark of any newcomer in the ACC.

“Once we saw that, we had to get on this guy,” Lopez said. “He has power and a strong arm behind the plate. To see a guy like Max take batting practice is as impressive as anybody we’ve seen before in the past. He absorbs information like a sponge and is an extremely coachable kid that really wants to listen and learn.”

Despite being from South Florida, Romero had never visited the University of Miami’s campus.

While playing in the prestigious Cape Cod Baseball League over the summer, Romero woke up early one morning, made the long drive to Boston Logan International Airport and flew down the East Coast.

“I stepped on campus, and I had no doubts about it. Something in my heart was telling me this was the place,” he said. “‘Lopes’ made me feel like I’m an important piece to the puzzle. I wanted someone that was going to rely on me like you rely on a family member. At the end of the day that was Miami.”

Since arriving in Coral Gables, Romero has worked tirelessly to take his game to new heights.

During the fall, the junior recorded a .300 average with two home runs and a co-team-high 10 RBI. Behind the plate, Romero threw out 7-of-14 base stealers, the most of any Hurricanes catchers.

“I’m a significantly better baseball player than last year. ‘Lopes’ has upped my game behind the plate, my footwork, my blocking, everything. Truthfully, my catching has improved tremendously. My bat has more juice in it too,” he said. “I trust ‘Lopes’ with everything. He has pushed me to limits that I didn’t even know.”

Miami has made 25 trips to the College World Series, the second-most all-time, trailing only Texas.

However, the Hurricanes just have one student-athlete on their roster with Omaha experience.

Miami head coach Gino DiMare, who has been to the College World Series 12 combined times as both a player and coach, understands as much as anyone how important adding a player with Romero’s background can enhance a young clubhouse.

“He gives us some valuable experience and leadership. Being a catcher, Max is a vocal guy,” DiMare said. “He’s a left-handed power guy, which we can use to help balance out our lineup. Defensively, he has a very, very good arm. I’ve been impressed with his focus and desire to be very, very good.”

Romero got a taste of the College World Series. Now, one year later, he wants to bring the Hurricanes back to their second home.

“The guys took me in with open arms and right away they became my brothers. We’re on the same mission together,” Romero said. “I’m more sure than ever we have the team to do it. Our chemistry, the way we are in the locker room, that’s a big part. The teams that make it to Omaha are the ones that stay together. We’re all on the same mission.”