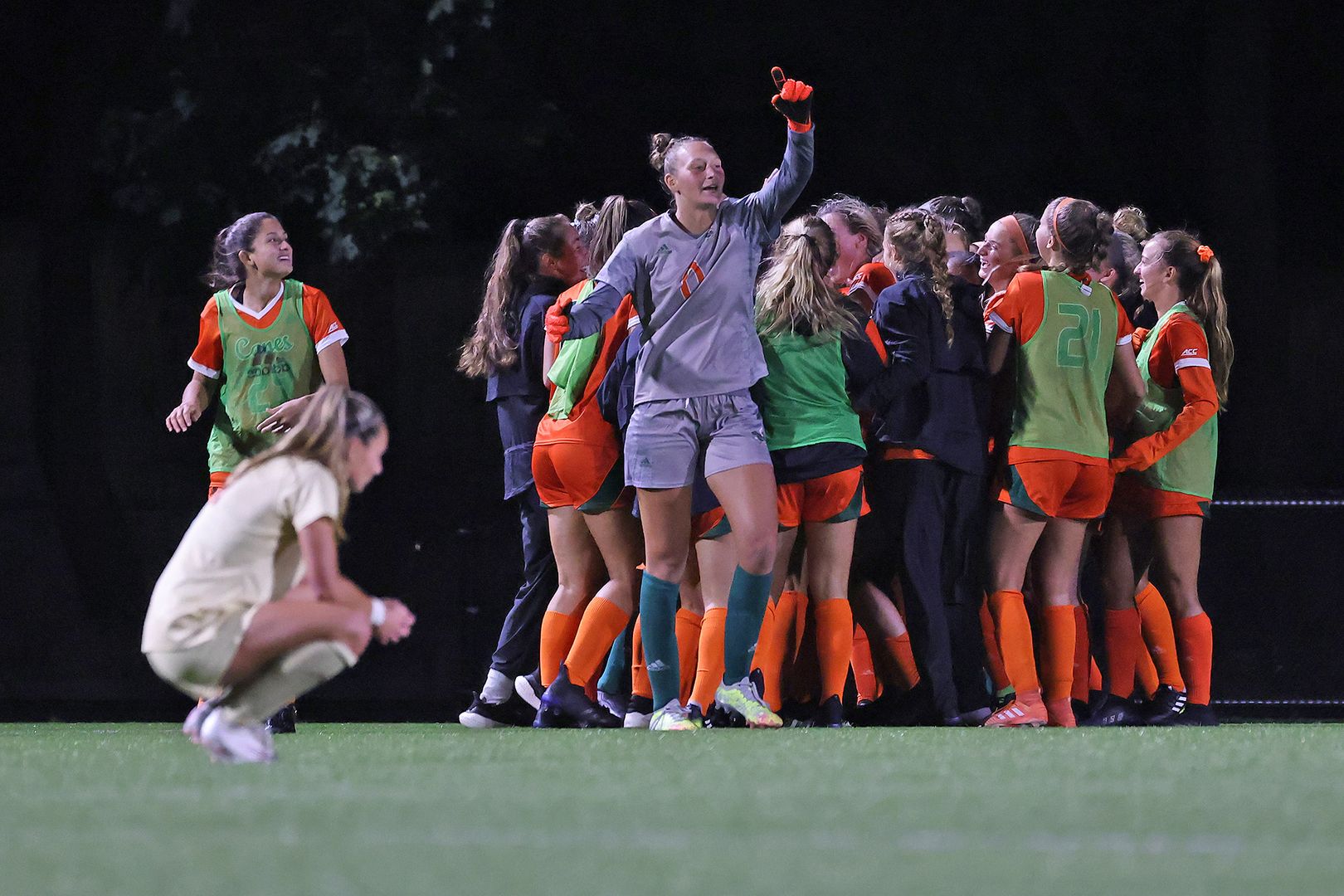 “It never gets old,” Koerwitz said. “I still get just as excited watching it. Now, that I’ve had time to digest it, it’s just such a good play. Mel played a great ball, María was smart to shoot it and Kat ran after it and gave everything she had. I was in the right spot just to finish it.”

With 13 seconds remaining, the Miami Hurricanes were awarded a free kick just in front of midfield following a Boston College yellow card. Miami goalie Melissa Dagenais booted a ball into the Eagles’ box. María Jakobsdóttir corralled the ball after it bounced around, slicing a left-footed shot wide of the goal. Despite time winding down, Katerina Molina ran it down, preventing the ball from trickling out of bounds.

Molina played the ball back towards the middle where Boston College attempted to clear it away, forcing overtime. However, the clearance try rolled right to Koerwitz, who made no mistake, rocketing a bullet into the upper right corner in the final second to give Miami its first-ever road win against Boston College.

“This game, all 26 people were so invested, so committed to the team’s performance,” Miami head coach Sarah Barnes said following Saturday’s 1-0 victory. “The effort was outstanding.”

In the moment, it instantly became Koerwitz’s favorite goal ever, her favorite game ever and a moment she’ll remember for the rest of her life. However, she could’ve never anticipated what was to follow.

Immediately after the match, she got back to her phone to more than 40 text messages. She saw the play the next day all over social media.

But it wasn’t until the Hurricanes returned to the University of Miami campus how much it set in.

Koerwitz was in Starbucks, picking up a coffee before going to class. While she was waiting in line, a student behind her said, ‘Are you number 16? That was sick.’

“On campus, in my classes, people were talking about it,” she said. “It was a new feeling. You get recognized as a student-athlete but for a particular play is super cool to me. To see it all over social media was incredible.”

The redshirt sophomore wasn’t the only one to be recognized for their efforts in the Hurricanes’ historic victory in Newton.

On Tuesday, Dagenais was named ACC Co-Defensive Player of the Week after posting a season-high eight saves against the Eagles. The junior goalkeeper led Miami to its first conference shutout since Oct. 25, 2018, when Miami toppled ninth-ranked Florida State, 1-0.

“I’m proud of it and it’s a reward for all the hard work I’ve been putting in,” Dagenais said. “It’s getting me closer to my goal of being the best goalie in the ACC.”

While the Saint-Hubert, Quebec, native recorded big-time save after big-time in her fourth clean sheet of the season, Dagenais also kick-started the Hurricanes’ last-second heroics.

After Emma Tucker drew a hard foul, Dagenais pushed the team forward to take the free kick. She served a ball into the box and watched from afar as the drama unfolded.

“I thought it was going out but Kat saved it. As soon as I saw Jackie swing her leg, I knew it was going in,” Dagenais said. “Honestly, I started running towards the team once the ball was in mid-air.”

As the Hurricanes prepare to visit Wake Forest, the Canes are looking to recreate that same magic Thursday evening in Winston-Salem, N.C.

“Everyone is in a good headspace. Everyone is laughing and smiling but focused at the same time,” Koerwitz said. “Sometimes we get too caught up in the wins and losses of things rather than focusing on that we play soccer because we love it. That moment served as a great reminder and we are carrying that into the next match. We need to be focused and know the game plan but remember we love to play soccer, we have a great team, we have a great coaching staff and we love being together.”