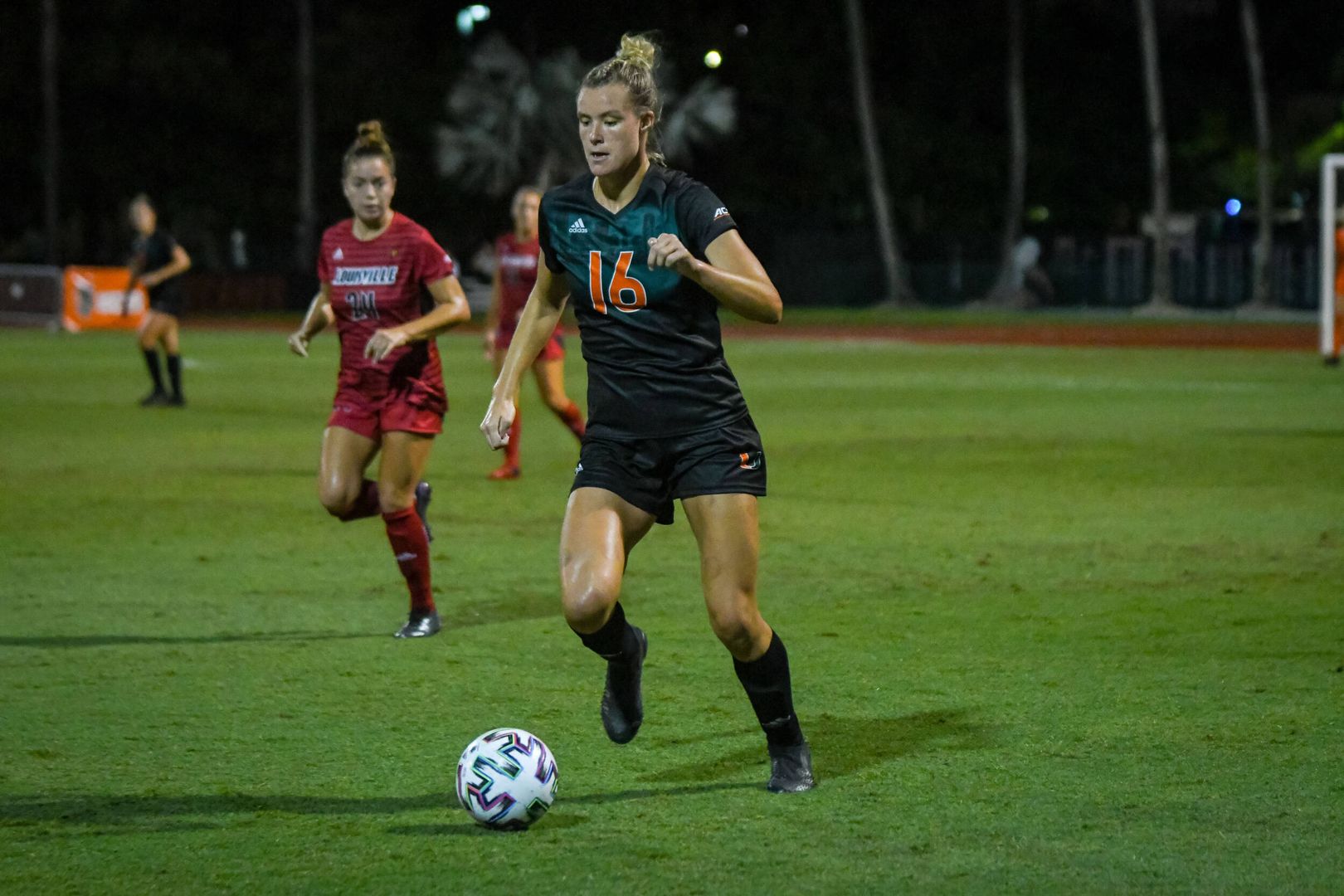 “It’s about the inches, just trying to find that one inch that gets you a little closer,” Miami head coach Sarah Barnes said. “The game was in our hands, but Louisville is a good team, so our expectation was that they were going to come out and throw everything at us in the second half, and they did. We have to look back at the film and try to find the inches and make improvements between now and Thursday.”

The Hurricanes (3-4, 0-1 ACC) jumped out to a two-goal advantage in the first half, but the Cardinals (5-1-1, 1-0 ACC) forced extra time with a pair of tallies after the intermission, ultimately, finding the game-winner in double overtime.

In the 25th minute, Miami midfielder/forward María Jakobsdóttir put the Canes on the board, tapping home her first goal of the season.

Sophomore Katerina Molina raced down the right sideline and rainbowed a cross towards the back post. Forward Gudrun Haralz popped up the ball into the air before Jackie Koerwitz headed it towards the goal line. Jakobsdóttir freed herself from Louisville’s defense and knocked it into the back of the net.

The Miami native streaked down the heart of the pitch, receiving a pass from fellow sophomore Michaela Baker. Molina shook the Cardinals’ defender and rifled a shot into the bottom left corner of the goal.

However, Louisville punched back.

The Cardinals stormed out of the break, cutting Miami’s lead in half within 46 seconds. Louisville quickly earned a corner kick to begin the second frame.

Senior Maisie Whitsett sent the ball into the box and Sarah Hernandez headed it to Hayley Howard. In traffic, Howard connected with her right foot to cut the deficit to 2-1.

With time winding down, the Cards pushed forward.

In the 83rd minute, Louisville redshirt junior Ravin Alexander weaved her way through the defense and into the box. Alexander got tied up with Miami’s outside back and was awarded a penalty kick.

Hernandez stepped up to the dot and buried the equalizer into the left corner.

After a scoreless first session in extra time, the Cardinals once again drew a foul deep into Hurricane territory. With a free-kick chance just outside the 18-yard box, Whitsett fired a laser that skipped through to give Louisville the victory.

Canes’ keeper Melissa Dagenais, who entered the ACC opener atop the conference in save percentage, matched a season-high with seven saves in the defeat.

The Hurricanes and Cardinals combined for 25 fouls in a physical 105-minute battle at Cobb Stadium.

Next up, Miami looks to avenge Friday’s defeat as the Hurricanes welcome Notre Dame to Coral Gables, Fla. on Thursday, Sept. 23. The match is scheduled to begin at 5 p.m.

“They’re hurting right now,” Barnes said. “That’s a sign of a team that cares deeply. They’re going to take the rest of tonight and tomorrow to try and recover from this. We have to make sure that we are ready to go and be ready to grind come Sunday.”