DURHAM, N.C. – The Miami Hurricanes went three weeks between games but did not miss a beat in their return to action at Duke on Saturday night.

Despite missing 15 players on Saturday, the Canes (8-1, 7-1 ACC) scored six touchdowns, posted over 500 yards of total offense and forced five turnovers in a 48-0 dismantling of the Blue Devils (2-8, 1-8 ACC) inside Wallace Wade Stadium.

“Obviously, very proud of our football team,” head coach Manny Diaz said. “It’s hard to go somewhere on the road and shut somebody out. Defense, I thought, from the opening kickoff, was spectacular. Just the way our front played, just getting after them and then [being] relentless to the football. Obviously, Duke has had an issue with turning the ball over, but I think we got five, to get five turnovers [is great]. This is kind of the field where the turnover chain sort of became a household name back in ’17. So, it was nice to see it come back out as often as it did tonight.”

The rust of 21 days between games showed early, as freshman running back Jaylan Knighton fumbled on Miami’s second play from scrimmage and the Blue Devils recovered the loose ball on the UM 35. But the fumble was a minor hiccup in No. 9 Miami’s dominant victory over Duke.

Phillips got back to work on Duke’s next possession, dropping Brice for a loss of a yard. The tackle for loss was Phillips’ second in as many series and helped the Hurricanes for another punt by the Blue Devils. He finished the game with four tackles, 3.5 tackles for loss and 1.5 sacks.

“I’ve always played with the highest motor that I can,” Phillips said. “My biggest thing is controlling what you can control and effort is one thing that you can always control. And so, I think the reason the production is kind of coming now, later on in the season, is just I’ve been able to get comfortable and be able to start working new moves and be able to gel with the defense more. And then, obviously, the fact that I’ve had this motor, this is kind of just natural. This is kind of just what comes.”

Miami’s offense started clicking on its third possession, with quarterback D’Eriq King leading the Hurricanes on a 12-play, 88-yard scoring drive that ended in a 24-yard touchdown from King to tight end Brevin Jordan. King completed 16-of-24 passes for 248 yards and three touchdowns, adding 52 rushing yards and a rushing touchdown in three quarters of action.

"I think our coaches did a great job all week of trying to use prepared, trying to get ready for a game and we came out here today and I think we cut it loose."

“Everybody was excited to come out there and play,” King said. “Just having three weeks off, sometimes you could take playing football for granted. I know getting back in the building, it was a different kind of energy. I think our coaches did a great job all week of trying to use prepared, trying to get ready for a game and we came out here today and I think we cut it loose. There’s still a lot of mistakes that will fix that tomorrow, but I’m super proud of the team, super proud of the coaches, they did a great job all week.”

After another Duke punt, the Hurricanes doubled their lead with another impressive scoring drive. Miami needed just six plays to cover 80 yards, with junior running back CamRon Harris closing out the possession with a 34-yard touchdown run that gave the Canes a 14-0 advantage with 1:15 left in the opening quarter.

With Duke entering Miami territory on its ensuing possession, Phillips stepped up for an 11-yard tackle for loss when he dropped Eli Pancol on fourth and 1 from the UM 33.

Miami’s offense turned to its ground attack with Harris and King leading the Hurricanes down the field toward its third score of the game. Harris burst for a 31-yard run to kick off the drive and King ran into the end zone from 11 yards out to make it 21-0 in favor of the Canes with over nine minutes remaining until halftime.

Duke, who entered the game with an FBS-leading 30 turnovers, coughed up the football when defensive tackle Nesta Jade Silvera forced Deon Jackson to fumble and defensive end Quincy Roche recovered the loose ball to give Miami the ball on the Duke 32. The Canes could not take advantage of the short field, as kicker Jose Borregales just missed a 43-yard field goal with 1:31 left before the intermission.

“The real challenge for the team—we talked about it at halftime—was we started well, but could we [continue it]? We’ve handled the adversity of being down this year, but could we handle the adversity of being up and finishing the game the way a top-10 team should finish the game,” Diaz said. “And I thought our guys came out in the second half and did a phenomenal job. Big plays on offense really sparked us, which had kind of been what we thought would be available going into the game.”

The Hurricanes’ defense came out of the locker room ready to cause havoc and Roche did exactly that, hitting Brice for a strip-sack on first-and-10 from the UM 30. Freshman linebacker Corey Flagg fell on the fumble, earning his first Turnover Chain as a Cane and giving UM the ball on its own 38.

“I feel like it all started with the practice,” Flagg said. “We had a great week of practice, a great week of preparation, and we came out firing on all cylinders. Special teams, offense and we just fed off of each other—the turnovers start to come. We came out playing Miami defense. There’s a standard and we finally held it.”

King and the Canes marched down the field at Wallace Wade Stadium again, with the quarterback hitting Jordan for a 30-yard gain that brought Miami just outside the red zone to the Duke 22. Five snaps later, King found receiver Dee Wiggins for a two-yard touchdown that pushed Miami’s lead to 28 points.

As productive as the Canes were on offense, the Miami defense continued its stifling effort against the Blue Devils. Roche turned in a two-yard tackle for loss on second-and-5 from the Duke 46 and Phillips followed with a six-yard sack that forced the sixth Duke punt of the game.

Two plays into their next drive, King found a wide-open Mike Harley and the speedy senior receiver sprinted for an 89-yard touchdown that made it 35-0 in favor of the visiting Hurricanes. The play was the longest touchdown of Harley’s Miami career and was the fourth-longest play in program history. It also marked the longest play since a 97-yard pass from Kyle Wright to Darnell Jenkins in 2007.

On the ensuing kickoff, things went from bad to worse for the Blue Devils. Freshman Elijah Roberts forced a fumble by returner Damond Philyaw-Johnson and fellow freshman Dominic Mammarelli pounced on the ball to give Miami the ball on the Duke 27.

Miami capitalized on the short field, finding the end zone for the sixth time when Harris jumped across the goal line for a two-yard touchdown run – his eighth rushing score of the season – that give the Hurricanes a 42-point lead with 2:03 left in the third quarter. Harris led all Miami rushers with 96 yards on the ground and a pair of touchdowns on just 15 carries. 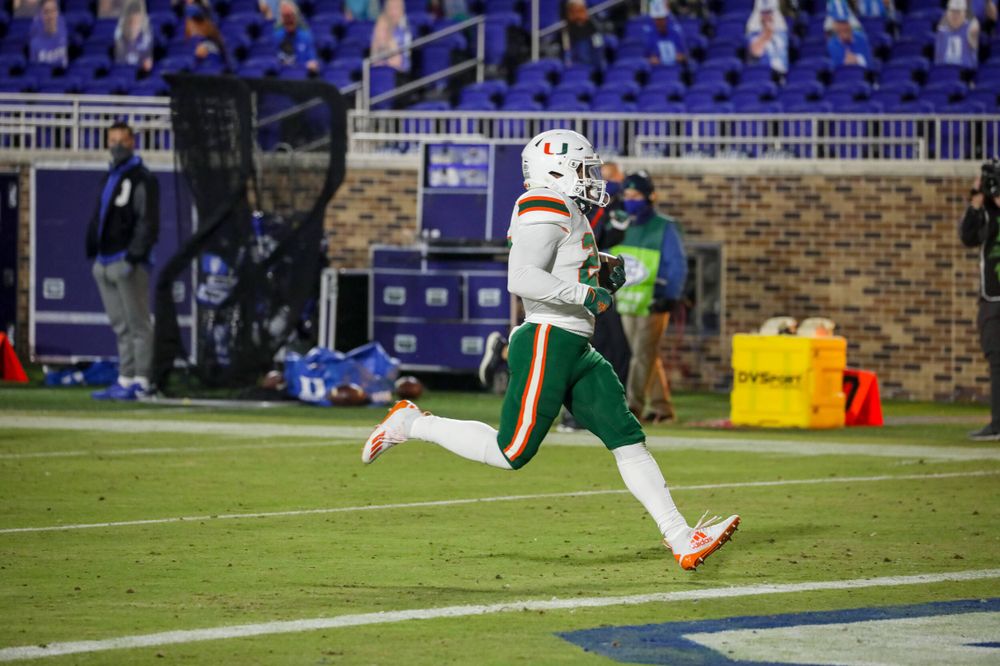 “Cam ran like a man possessed tonight,” Diaz said. “Those young backs push him and, again, he gets challenged every week in practice and gets challenged by the coaches. I felt almost very similar tonight to the performance the wide receivers had earlier when they were starting to get pushed by our young wideouts. Cam was phenomenal tonight.

Deserves a lot of credit for the way that he ran. Made some tough runs. The big ones all stand out, but even some of the shorter runs, he went and got the dirty yardage when that’s what was required. So, I thought Cam really sparked our offense in the first half.”

N’Kosi Perry replaced King at quarterback on Miami’s first drive of the fourth quarter and the redshirt junior made a big splash on his first play from scrimmage. Perry hit freshman running back Donald Chaney Jr. for a 58-yard completion that sparked another UM scoring drive, as Borregales drilled a 52-yard field goal to make it 45-0 with 10:50 left to play.

Duke also replaced its quarterback, as Gunnar Holmberg took over for Brice on the Blue Devils’ next possession. The redshirt sophomore fumbled on his first play from scrimmage, as Bubba Bolden jarred the ball loose and Amari Carter recovered the fumble to give the Hurricanes their fourth turnover of the game.

Miami converted the turnover into points, as Borregales split the uprights with a 32-yard field goal that raised the Hurricanes’ tally to 48 points with eight and a half minutes remaining on the clock. 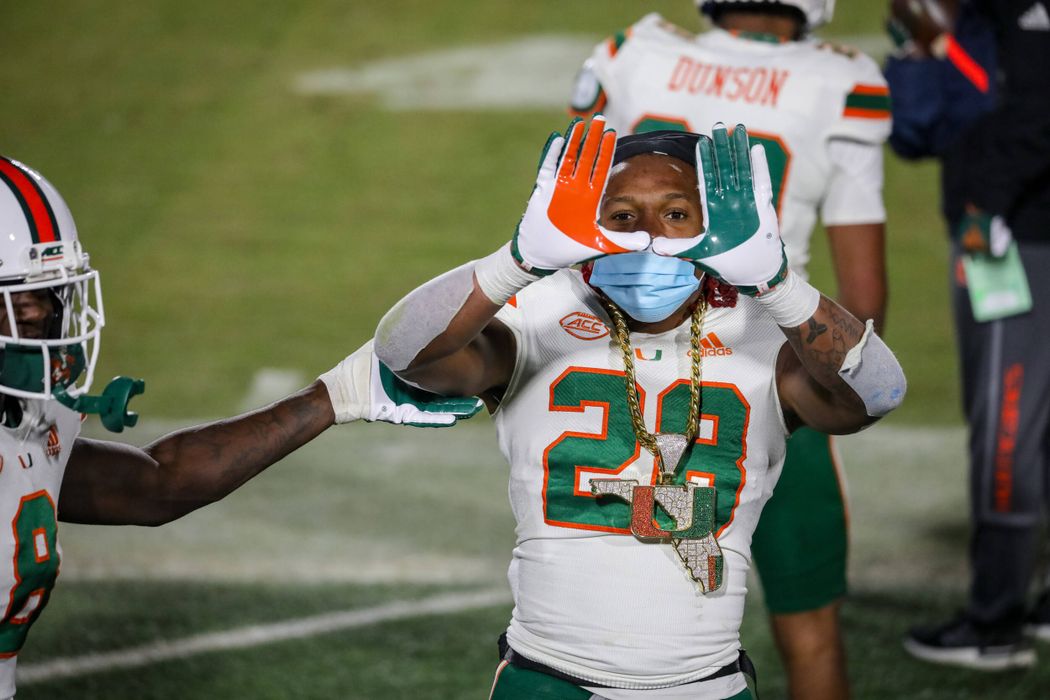 On Duke’s next drive, freshman cornerback Marcus Clarke picked off Holmberg to secure his first career interception and create the fifth turnover of the night by Miami’s defense.

“The coaches kind of put it on us this week to come out and dominate,” Roche said. “We had three weeks off. I think what you saw is just a team that was excited to be back out there playing football. We hadn’t played or practiced in so long and it was just a blessing and a good feeling to be back out there. And I think that showed in our performance today.”

Saturday’s victory also marked the Hurricanes’ first conference win by 45+ points since they beat Duke, 52-7, in 2005. It was also Miami’s largest road win versus an ACC opponent since 1983, when the Canes dropped Duke, 56-17.

“Every single player who traveled played in this game. Every single player, which was a heck of an accomplishment,” Diaz said. “So great to see a lot of young guys in there making plays. It was just of ton of positives to take away. It feels great to play after three weeks off. And more than anything, it feels great to be going home. Number one because the weather is a hell of a lot better than it is here. But number two because we get to finally get back into our stadium, where we haven’t been since, it feels like, forever, in front of however many fans that they let in there and play two big-time ACC games. Our guys are really excited for the opportunity to go back and play in front of our friends and family.”