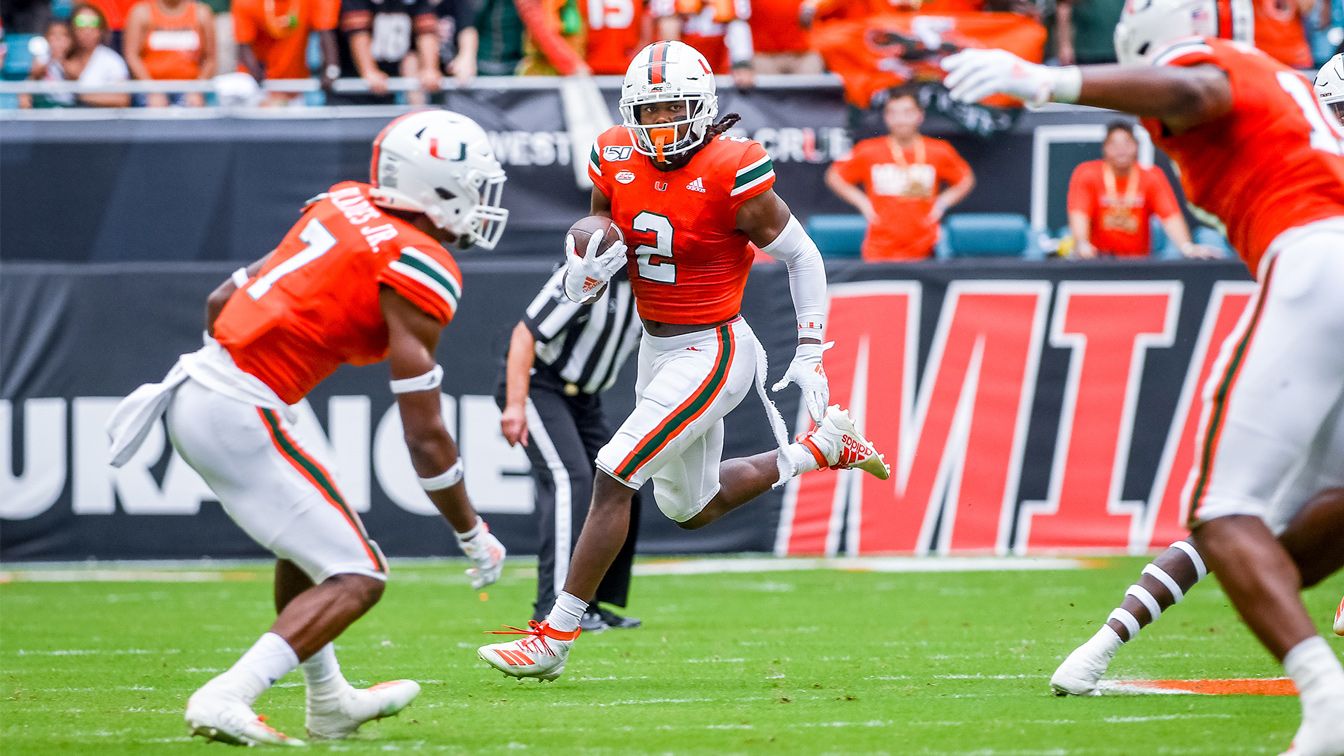 MIAMI GARDENS, Fla. – A week after celebrating their best win of the season, the Hurricanes find themselves on the opposite end of the emotional spectrum.

Expectations coming into Saturday’s game against Georgia Tech were that Miami should have been able to capitalize on the Yellow Jackets’ season-long struggles and pick up a much-needed conference win.

Instead, the Hurricanes were hampered by early mistakes and plagued by some familiar issues that ultimately took their toll in a 28-21 overtime loss to Georgia Tech that dropped Miami’s record to 3-4 overall and 1-3 in Atlantic Coast Conference play.

Now, the Hurricanes have to again do some soul searching while they look for answers and turn their attention to next week’s game at Pittsburgh.

“Obviously, very disappointed in the result today. [We] certainly had more than enough chances to win this football game. Some mistakes early on gave them hope, gave them life. And to their credit, they did a good job possessing the football in the second half [and] wearing us down,” head coach Manny Diaz said. “We will stay unified in our locker room, we will stay together, go to Pittsburgh next week and go compete the way that Miami Hurricanes compete.”

Here, a look at some of what Miami can take from a tough afternoon at Hard Rock Stadium.

With three conference losses, the Hurricanes know they face a challenging uphill climb in the Coastal Division race and that they’ll probably need significant help to even potentially be in the ACC Championship Game conversation.

They also know there are still five games to play and pride is on the line.

There are seniors who want to finish their Miami careers on a positive note and underclassmen who want to continue to set the foundation for the program.

All of that is why some of the Hurricanes’ veteran leaders stressed after Saturday’s loss that it’s essential the locker room stays united, something they say will happen.

“We’ve just got to stick together for the next game,” defensive end Trevon Hill said. “We’ve got to focus on Pitt because they aren’t going to feel sorry for us. We’ve got to go out there and dominate them guys, prepare well and execute the way we have to.”

Said linebacker Shaq Quarterman, “All losses are tough, especially this one, in the nature that it happened. But, make no mistake: the locker room will always stay together. When things [that are] negative happen, most people turn [and] they do less. They don’t work as hard as they used to. But I told them and I assured them that when things go wrong, you have to go harder. … So I just encouraged them that when things go wrong, the thing is to go harder, not to digress in any way.”

2. The kicking game remains an issue

A season ago, the Hurricanes struggled in their punting game. Miami recruited Lou Hedley and things are much improved on that front.

This year, though, placekicking has been problematic.

Against Georgia Tech, the Hurricanes faltered on three field goals, none longer than 35 yards. Making things even more frustrating, Miami attempted two field goals inside 27 yards in the game’s final six minutes. Neither led to points.

During that stretch, Bubba Baxa missed from 27 yards with 5:41 left and later, with 26 seconds left and the game tied at 21, Turner Davidson had his 25-yarder blocked.

On the season, Miami is 6-of-13 on field goals, with missed or blocked kicks taking their toll in each of the Hurricanes’ four losses.

“We get into close games and to not be able to finish red zone drives with easy field goals, it lifts up [the opponent’s] sideline. You can see their reaction. And it’s demoralizing to our sideline,” Diaz said. “All we know how to do is to manage the situation. We continue to coach the guys, we give them all the psychological help that we can afford them. As I’ve said from when this first became an issue, they are who we have. We do not have free agency. We just have to continue to press on.”

3. The red zone offense is struggling

Finishing red zone trips with end zone trips is key for any offense. That wasn’t the case for Miami in Saturday’s loss.

Expect red zone offense to continue to be a focus for Miami as it prepares for Pittsburgh.

“We are playing with very little margin of error to win close games and I think that’s what’s obvious tonight. We can’t do anything about it. To get the ball down there close three times and come away with no points [is tough], and really the fourth time is on a sack,” Diaz said. “We drove the ball inside their 30-yard-line four times and came away with no points. That is the margin for error that I’m talking about that makes you, as an offensive play caller, almost have to call perfect plays, but we just had to power through that. That’s just our situation.”

As the Hurricanes tried to fight their way through Saturday’s game, they dealt with multiple challenges, including a number of injuries to several playmakers.

DeeJay Dallas, Miami’s leading rusher and one of the emotional leaders of the team, left the game in the first half. Quarterback N’Kosi Perry left the game briefly, though he ultimately returned. And both linebacker Michael Pinckney and cornerback Trajan Bandy were unable to finish the game after they, too, got hurt.

No, the injuries weren’t the reason the Hurricanes came up short against the Yellow Jackets, but they did add another layer of problems that proved costly.

With Dallas sidelined, reserve running back Cam Harris stepped up in a big way.

On multiple occasions this season, the sophomore has shown off his speed, athleticism and playmaking abilities, but he had a career-day Saturday.

His 136 rushing yards were the most by a Hurricane this season and the most since Travis Homer rushed for 168 yards last year against Pittsburgh.

Wie receiver K.J. Osborn has proven one of Miami’s top new arrivals this season and the graduate transfer from Buffalo put together another big performance against Georgia Tech.

With fellow receiver Jeff Thomas out Saturday, Osborn finished with four catches for 39 yards and a touchdown, but also contributed 68 yards on punt returns.

His 111 all-purpose yards were second on the Hurricanes, behind only Davis’ 168.

Linebacker Shaq Quarterman has started every game for the Hurricanes since arriving on campus in January 2016. Saturday’s game marked his 46th consecutive start and the senior has the second-longest start streak in all of FBS.

With Pinckney hurt and fellow senior linebacker Zach McCloud redshirting, Quarterman was on the field much of Saturday afternoon, finishing with a team-high 13 tackles, including two tackles for loss. He also had two QB hurries, broke up a pass and forced and recovered a fumble that came while Georgia Tech was driving in the fourth quarter.

8. Lou Hedley can flip the field

Hedley arrived in Coral Gables to much fanfare this summer and has delivered.

Against Georgia Tech, he averaged 43.3 yards on his three punts, with all three being downed inside the 20-yard line. He also had a career-long 67-yarder that forced Georgia Tech to start a third-quarter drive on its own 5-yard line. The Yellow Jackets would not score on that possession.

Under former head coach Paul Johnson, Georgia Tech was known for running the ball, chewing clock and wearing down opposing defenses. Current Yellow Jackets head coach Geoff Collins is still running some option elements in his offense and in the second half of Saturday’s game, that meant trouble for Miami.

The Yellow Jackets held the ball for 10:10 in the third quarter and another 7:52 in the fourth. They gashed the Hurricanes for 207 rushing yards, something no other team has been able to do this season.

“I was disappointed in the drive right before halftime. I thought we did a very poor job tackling. I thought our guys were at the spot, at the point of attack, to stop the run and I thought their runners ran harder than we tackled,” Diaz said. “I thought that was disappointing and I thought that drive sort of gave them confidence going into the second half to try and do the same thing. We respected [Jordan] Mason … even a year ago … we thought he was a very tough, very physical runner, but the way we’ve played run defense this year, to give him 20 [carries] for 141 [yards], including just running through a tackle in the overtime on second down, you need your guys to step up and make plays.”

10. The Hurricanes now have to find solutions on the road

Saturday’s loss to Georgia Tech marked the final game of a five-game homestand in which Miami went 3-2. Now, if the Hurricanes are to secure bowl eligibility, they’ll have to try and figure out some of the problems plaguing them while on the road.

Miami has five games left on its schedule and all but one will be played away from Hard Rock Stadium.

The Hurricanes will travel to Pittsburgh this week to face the reigning Coastal Division champion Panthers at Heinz Field. After that, they’ll travel to Tallahassee to face rival Florida State on Nov. 2.

The Hurricanes will then close out their home slate Nov. 9 against Louisville, before facing FIU at Marlins Park on Nov. 23 and then traveling to Duke on Nov. 30.

There won’t be many friendly crowds cheering them on in some of those places, but the Hurricanes are going to have to find a way to overcome that now if they are to extend their season beyond November.