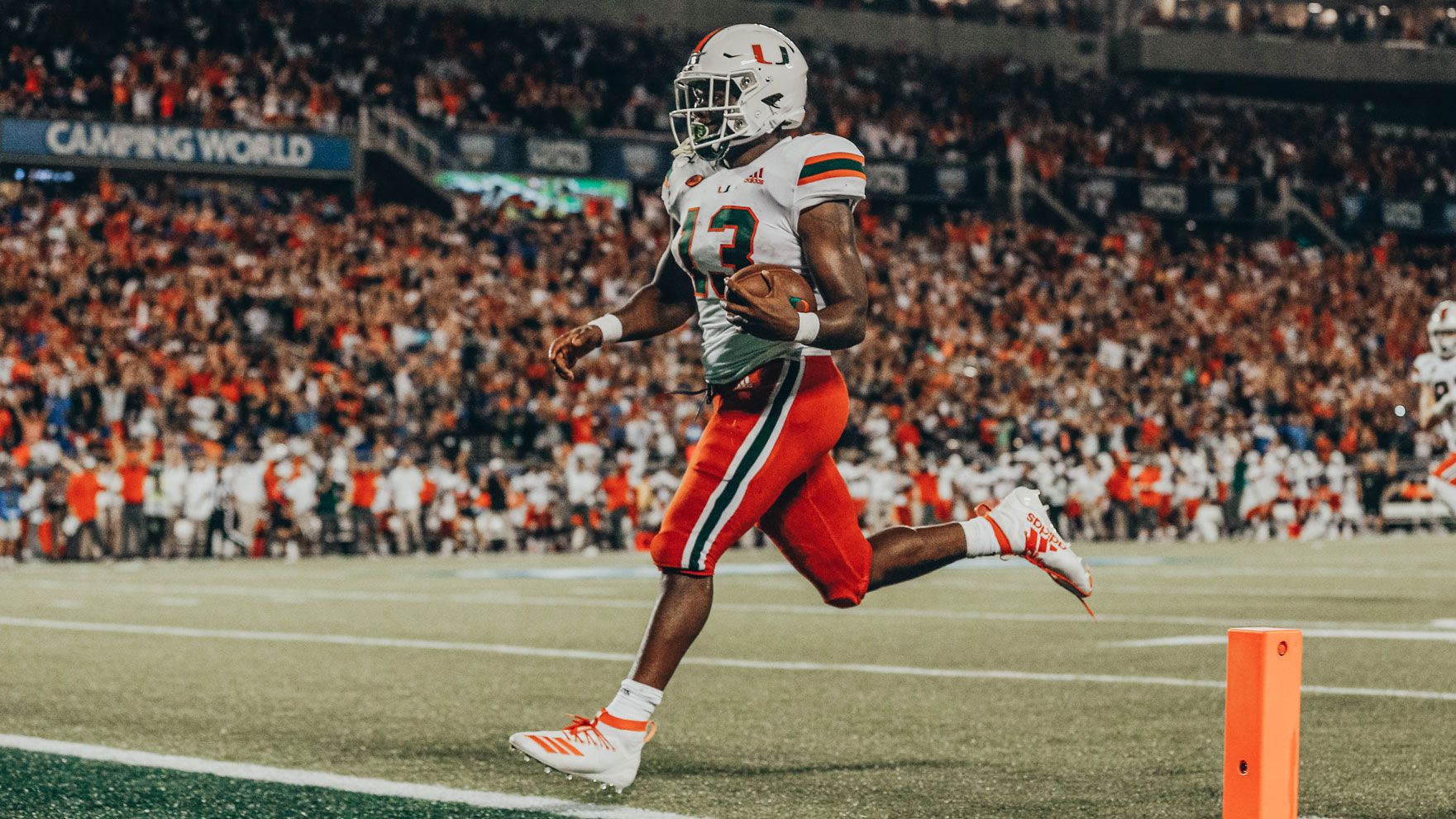 Miami Drops Opener to No. 8 Florida

ORLANDO, Fla. – A back-and-forth battle between two bitter rivals ended with the Miami Hurricanes falling short to the No. 8 Florida Gators, 24-20, at the Camping World Kickoff.

The Canes and Gators combined for five lead changes before 66,503 fans on Saturday night at Camping World Stadium. The two rivals also teamed up for 23 penalties and 225 penalty yards, but it all came down to a fourth quarter full of excitement.

“I want to congratulate the University of Florida on winning the game,” head coach Manny Diaz said. “It was a game filled, like most opening games like this are, with a ton of mistakes from both teams. It ultimately came down to a couple of red zone possessions and they were able to capitalize and we were not able to capitalize and ultimately that was the difference in the ball game.

Facing a four-point deficit heading into the final 15 minutes of football, the Hurricanes wasted little time flipping the margin in their favor.

A 15-yard unsportsmanlike penalty on Florida’s Kyree Campbell after a four-yard loss by DeeJay Dallas gave the Hurricanes a boost and Dallas exploded on the next snap for a 50-yard touchdown run that gave Miami a 20-17 lead just 45 seconds into the final quarter.

Miami carried that momentum into its third forced turnover of the night, as junior safety Amari Carter ended the ensuing Florida possession when he hauled in his first career interception and returned it 23 yards to the Gator 25. Three plays later, kicker Bubba Baxa was hit late out of bounds after rushing on a fake field goal.

The penalty gave Miami an automatic first down and helped erase the effect of a hold called during Baxa’s run. It also appeared like Miami was poised to add to it’s lead, but Florida caught a break as Baxa missed a 27-yard field goal attempt four snaps later to keep Miami’s advantage at three.

The Gators rode the momentum shift in a big way, as Feleipe Franks hit Josh Hammond for a 65-yard gain on their first play from scrimmage following the missed kick. Three plays later, Franks scored on a three-yard quarterback keeper to put Florida back on top, 24-20, and mark the fifth lead change of the night.

The game appeared to come down to fourth-and-9 from the Florida 30, with Miami trailing by four. The Gators, who went 4-for-4 on fourth-down conversions on Saturday night, stopped the Canes on their first fourth-down conversion attempt of the night when Miami quarterback Jarren Williams was sacked for the seventh time in the game.

But the Canes bounced back in a big way, forcing their fourth turnover of the night when Romeo Finley picked off Franks on the first play of the Florida possession to give Miami another shot to make up the four-point deficit. A rash of offensive penalties put the Canes in a tough spot, facing a third-and-27 from their own 43.

“I thought a crucial point in the game was when we got the big interception,” Diaz said. “And this just shows we’re not ready to be a big time team yet. We get a 15-yard penalty for taunting. And on the next play, we got a 15-yard penalty for a chop block. We gave away 30 yards on really what might have been the winning change of possession — play the game. And that just means we don’t have the maturity level to see a victory through. So, again, that’s a process of what we have to learn, and we’re obviously not there yet.”

Gators defensive end Jabari Zuniga sacked Williams to give Florida their ninth sack of the night and put the Hurricanes in a fourth-and-34 from the Miami 36. But Florida’s Marco Wilson was called for pass interference on a throw intended for Jeff Thomas and Miami was gifted a fresh set of downs.

Another pass interference on the Gators, this time by Trey Dean on third-and-12 from the Florida 49, kept Miami’s drive alive and gave them another free first down with under a minute remaining in the game.

Miami’s final shot came on fourth-and-12 from the UF 26 with 20 seconds remaining in the game, but Williams bobbled the snap and the Gators converged on Miami’s quarterback for their 10thsack of the night and Florida took a knee to wrap up the four-point win.

While the end result was not what Miami would have hoped, there were a lot of positives to take from the season opener against the rival Gators.

Williams, who made his first career start on Saturday, finished the game 19-for-29 for 214 yards and a touchdown. He showed confidence and poise from the start, engineering a nine-play, 56-yard scoring drive on Miami’s opening possession that ended in a 36-yard field goal by Baxa.

“I mean, you probably can’t put a guy in a more adverse situation than in this stadium,” Diaz said of Williams. “The amazing atmosphere from both sets of fans, you know, their defensive front, which we knew was really good. Jarren never really blinked. A lot of time he didn’t have a lot of time and I thought he just played a little of courage, you know, made some plays with his feet, scrambled the throw to keep this some things alive. I think you can see why we picked him to be our guy.”

Miami’s defense appeared to force a three-and-out on the first Florida drive, but Gators punter Tommy Townsend rushed for a first down on a fake punt. One play later, Kadarius Toney used his blockers and broke some tackles to scamper for a 66-yard touchdown that put the Gators ahead, 7-3, with 7:37 remaining in the opening quarter.

“We talked about all off season about developing a backbone, being able to withstand a punch, which happened to us in the first half with the long catch and run by Toney,” Diaz said. “And then that happened the second half when we fumbled the punt and they score on the short field and a couple times where it’s like, well, I don’t know. Maybe it’s not your night and you can kind of let go of the rope and I thought our guys looked those situations in the eye, fought through them, and ultimately gave ourselves a chance to win the game with 10 seconds left in the game throwing the ball in their end zone.

“Like I said, that’s what a big time program should do. You don’t pat yourself on the back for not quitting, but it is something. And that was a big point of our off season.”

The Hurricane defense made a big play with the Gators in the red zone, as defensive end Scott Patchan recovered a fumble to give Miami possession on its own 9 early in the second quarter. When Patchan reached the Miami sideline, he became the first player to don the new edition of the Miami Turnover Chain featuring a bejeweled “U” and a giant “305” for the Miami area code.

The “305” charm weighs 500 grams (half a kilogram), while the chain itself weighs two kilograms. The charm is roughly 10 inches wide. There are more than 2,000 white sapphire stones in the “305” charm.

Miami forced its second turnover of the quarter when senior linebacker Shaquille Quarterman recovered a fumble by Florida running back Malik Davis. Quarterman was rewarded with the Turnover Chain and the Hurricanes took over possession on its own 48 with 10:46 remaining in the first half. Five plays later, Baxa converted a 42-yard field goal that brought the Canes within one, 7-6.

The Canes had their own slippery screen late in the opening half, as Dallas broke free for a 40-yard gain on second-and-19 from the Miami 45 to push the Hurricanes to the Florida 15.

Miami took its first lead of the night when Williams connected with Brevin Jordan and the sophomore tight end broke a tackle before sprinting across the goal line for a 25-yard touchdown that put the Hurricanes ahead, 13-7, with 45 seconds remaining in the half.

Jordan also made history, becoming the first Miami player to wear the “Touchdown Rings” – a new Canes football tradition that serves as the offensive counterpart to the “Turnover Chain.”  The sapphire encrusted rings are worn in tandem, with one half spelling “Hurri” and the other half “Canes” in Miami’s iconic orange and green script font.

Redshirt freshman Gregory Rousseau punctuated the opening half with his first career sack, dropping Franks on the final play of the first 30 minutes to send the Miami to the locker room ahead by six points.

After their first possession of the second half ended in a punt, Florida benefitted from a missed false start by right tackle Jean Delance. Instead of a penalty that would have put the Gators in a fourth-and-10 situation from the Miami 42, Trevon Grimes hauled in a 10-yard reception for their fourth fourth-down conversion of the night.

Grimes’ play was followed by an 18-yard catch by Kyle Pitts that put the Gators at the UM 9, but the Miami defense held firm and limited the Gators to a 27-yard field goal that brought them within three, 13-10, with 6:30 to go in the third quarter.

Miami’s defense forced a punt with under two minutes to go in the third quarter, but the Gators caught a break as Jeff Thomas muffed the punt and Florida regained possession at the UM 11. Three plays later, Franks connected with Lamical Perine for a go-ahead eight-yard touchdown that put Florida on top, 17-13.

Despite forcing four turnovers, Miami came away with just three total points off the takeaways. Florida’s lone takeaway was the recovery of Thomas’ muffed punt, but the Gators scored a touchdown off the turnover and that proved to be the difference in the score on Saturday.

“There were a couple major blunders on special teams and the short fields right there really ended up being telling in a very low scoring game where everything mattered,” Diaz said. “I thought our guys played with a lot of courage. I think they played with a lot of effort. But it doesn’t matter because we lost the game. We did not come here to play with courage and effort. We came here to win the game and it’s not OK at the University of Miami ever to lose to the University of Florida. Everybody in that locker room feels the pain of that right now.”