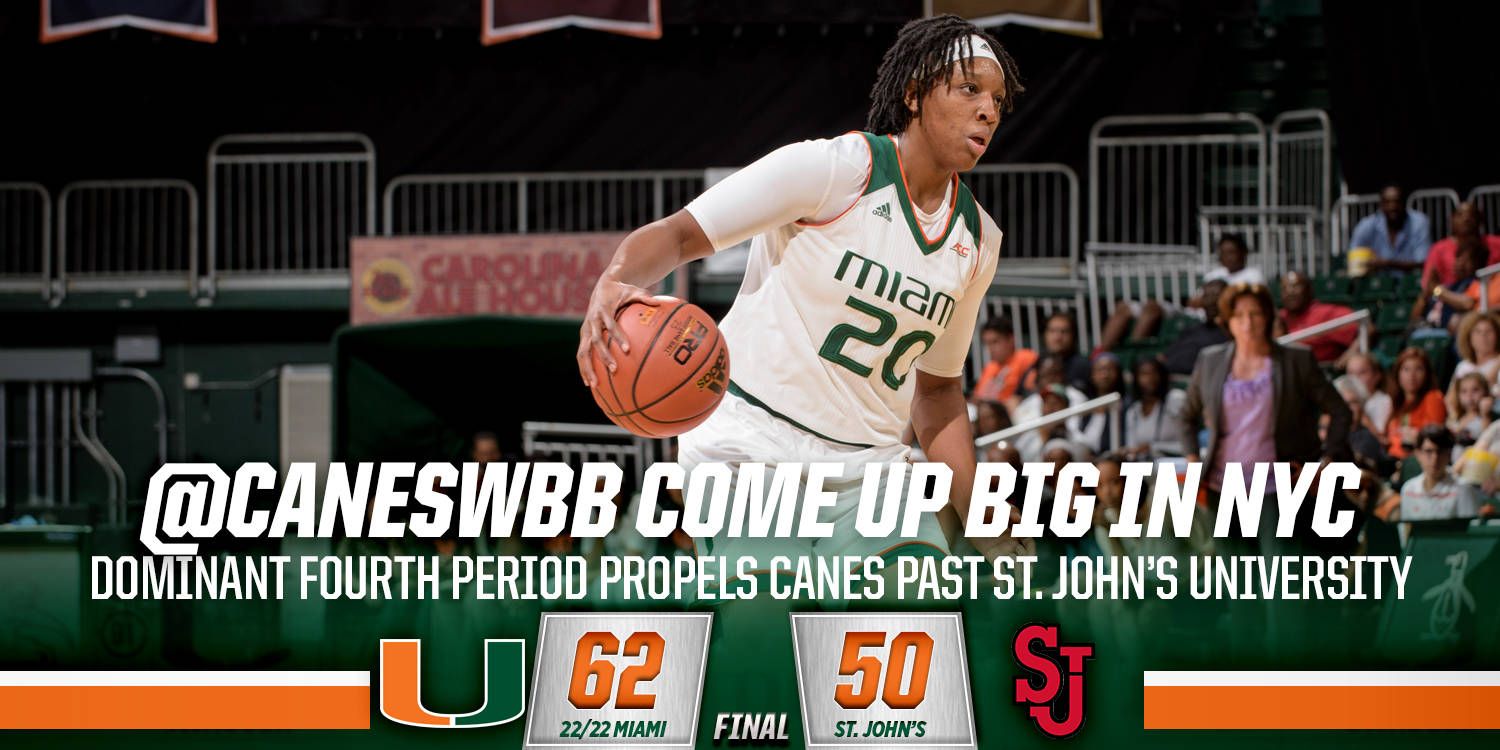 QUEENS, N.Y. – Despite playing without two of its top players, the University of Miami women’s basketball team earned a 62-50 victory at S. John’s Sunday night at Carnesecca Arena.

Sophomores Laura Cornelius and Emese Hof were both overseas with the Dutch National Team for the 2017 FIBA EuroBasket Qualifiers, but that did not slow down No. 22/22 Miami (3-1).

The Hurricanes, who outscored St. John’s by 20 points over the final 11 minutes, were led by a career-high 16 points from sophomore forward/center Erykah Davenport and a double-double by redshirt senior forward Keyona Hayes.

“I think I am going to be proud of this win, but I am not sure, we might burn this film,” Miami head coach Katie Meier joked after the victory. “There was nothing fast about us. We did not play with our pace and our space—and that is okay because part of [it is that], with everybody out of position, we had to be a ball control offense, which we didn’t have much time to practice.”

The Hurricanes jumped out to a 9-2 lead in the first three minutes and 13 seconds. After St. John’s (1-2) scored seven straight points to tie the score, Miami closed the period strong and led 16-12 after 10 minutes of action.

St. John’s used a 13-0 run in the third period to take, and then build on, its first lead of the contest, surging to a 39-31 advantage. Miami would pull back within two after scoring six consecutive points from the free throw line in the final minute of the frame, but a basket at the buzzer by redshirt senior forward Sandra Udobi gave the Red Storm a 47-43 edge entering the fourth period.

The Hurricanes scored 15 of the first 16 points in the final frame to charge ahead to a 58-48 lead. Overall, Miami outscored the Red Storm, 25-5, in the last 11 minutes of the game, including 19-3 in the fourth frame.

Davenport’s 34 minutes were a career high and she has now scored double-digit points in each of Miami’s first four games after previously notching 10-plus points in back-to-back games just once in her first two seasons. The Decatur, Ga., native also pulled down a season-high nine rebounds, tied for her third-most in a game as a Hurricane, and matched a career best with six made field goals.

Hayes logged a season-high 13 points, a game- and season-high 11 rebounds and a co-season- and co-game-high four assists.

“I thought we could get them inside—and we did. I am actually surprised we didn’t have more points in the paint,” Meier said. “We missed a lot of chippies down there. Key Hayes is usually really reliable. She had a double-double and I’m still saying she could have made some more. Erykah was the same way, but they worked hard and they really had to play heavy minutes . . .  I’m proud of them.”

Senior guard Jessica Thomas recorded 15 points, setting new career bests in free throws made (13) and attempted (15), plus matched Hayes with four assists. Her 13 makes tied for the seventh-most in program history and her 15 attempts tied for the eighth-most.

Like Davenport, senior guard Nigia Greene, who blocked the first shot of her career, set a new career high in minutes played, finishing with 33, well surpassing her prior top mark of 27.

Since women’s basketball moved to periods before the 2015-16 season, this is the third time Miami has trailed through three sessions and come back to win, joining victories over Charlotte (Nov. 23, 2015) and Illinois (Dec. 2, 2015) last season.

The Hurricanes are now set to return home and will resume non-conference play with the Miami Thanksgiving Tournament at the Watsco Center. Miami’s first matchup will be against Grambling State Friday at 4 p.m., and it will then take on Fordham or Texas Tech two days later.

·         Junior forward Keyanna Harris made the first start of her career, in place of Cornelius.

·         Donna E. Shalala, the former president of the University of Miami, and Earl Monroe, a member of the Naismith Memorial Basketball Hall of Fame, were in attendance for the game.