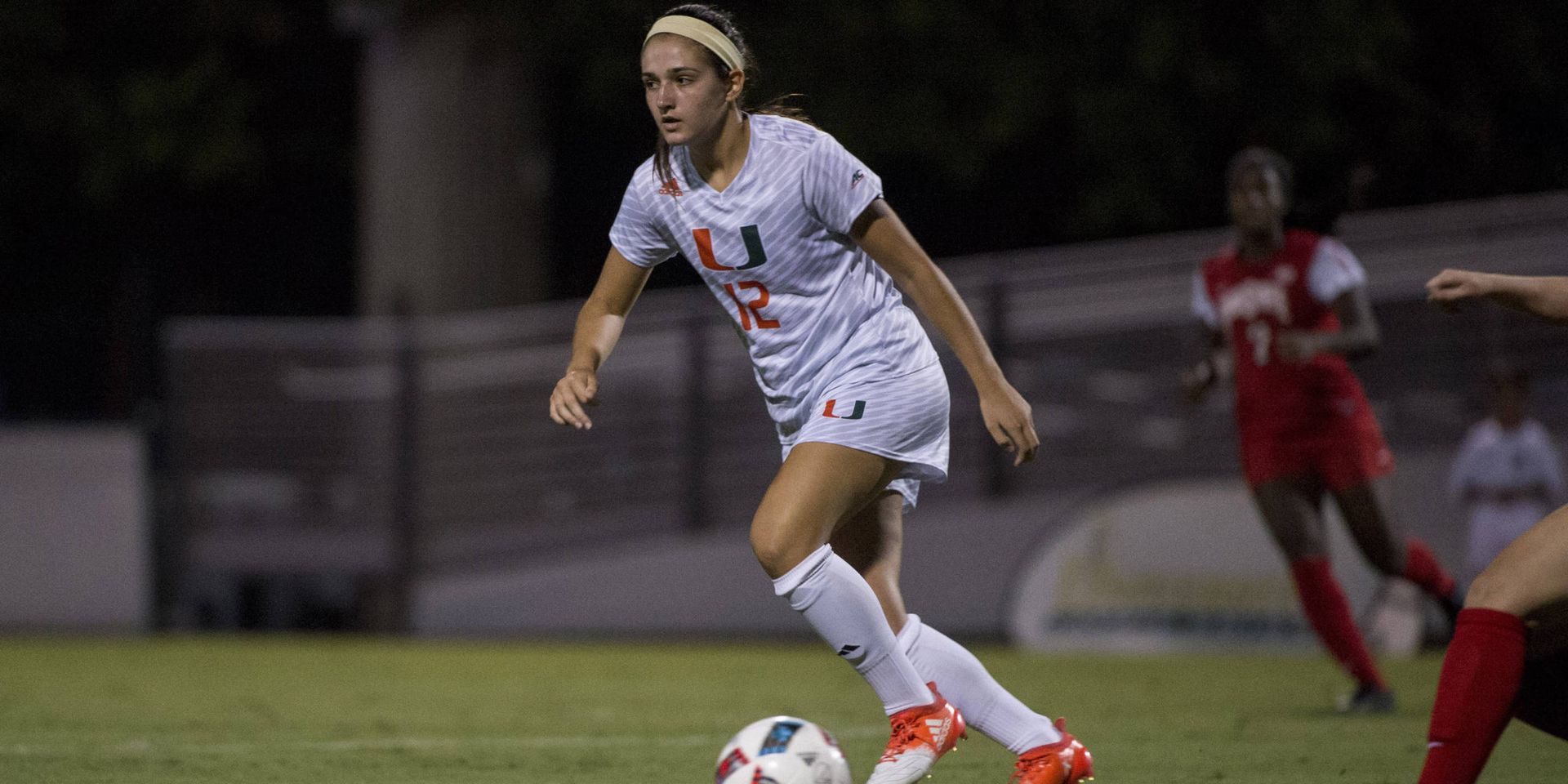 Miami (2-1-0) freshman forward Kristina Fisher scored an equalizer early in the second half—her fourth goal in three matches to begin her career—but it was not enough. The Buckeyes, who began the year in the NSCAA Top 25 and are now in receiving votes section, recorded a late decisive tally to earn the victory.

“I thought we did a really great job,” Miami head coach Mary-Frances Monroe said. “We had a game plan going in and executed it. We found ourselves getting some great scoring chances and we were able to put one away. So, I’m really proud of the team.

Ohio State (3-0-0) struck first, scoring the opening tally in the 11th minute on an unassisted goal by Nichelle Prince, a member of Canada’s Olympic bronze medal-winning team. From the end line, the senior forward slipped the ball near post past Miami redshirt sophomore goalkeeper Phallon Tullis-Joyce and into the back of the net.

It marked the first time the Hurricanes had conceded a goal in 2016, ending a streak of over 190 minutes.

Miami entered the break trailing, 1-0, despite holding a 5-4 edge in shots, including a 3-2 lead in shots on goal.

The Hurricanes pulled level in the 47th minute when Fisher and sophomore midfielder Niccola Venezia teamed up. Venezia played a long ball to Fisher, who got through the last Ohio State defender and sent it past redshirt senior goalkeeper Jillian McVicker.

“We’ve been working on getting the ball behind their back line,” Monroe said. “There’s a lot of space for our fast players to run into. [Kristina] did a really good job of [showing] individual work ethic to finish that ball.”

The Buckeyes nearly regained the lead twice in the ensuing five minutes, but on both occasions, Tullis-Joyce made a superb play to keep the score even, including a spectacular diving stop in the 49th minute.

Tullis-Joyce went on to make two more saves in the second half and finished the match with five against the Buckeyes.

“We’ve asked her to elevate her game and to control the box and she’s done a really great job with that,” Monroe said of Tullis-Joyce’s play. “She came up with a big-time save on a ball that looked like it was going in upper 90, and for her to extend as far as she did is just unbelievable.”

Ohio State, however, did go back in front in the 75th minute when junior forward Sammy Edwards headed in a fantastic far post cross by junior midfielder Nikki Walts.

Despite its best efforts down the stretch, Miami was unable to come up with a second goal to tie the score once again and came up on the short side of a result for the first time this season.

The Hurricanes will be back in action Sunday when they host Jacksonville at 1 p.m., at Cobb Stadium.