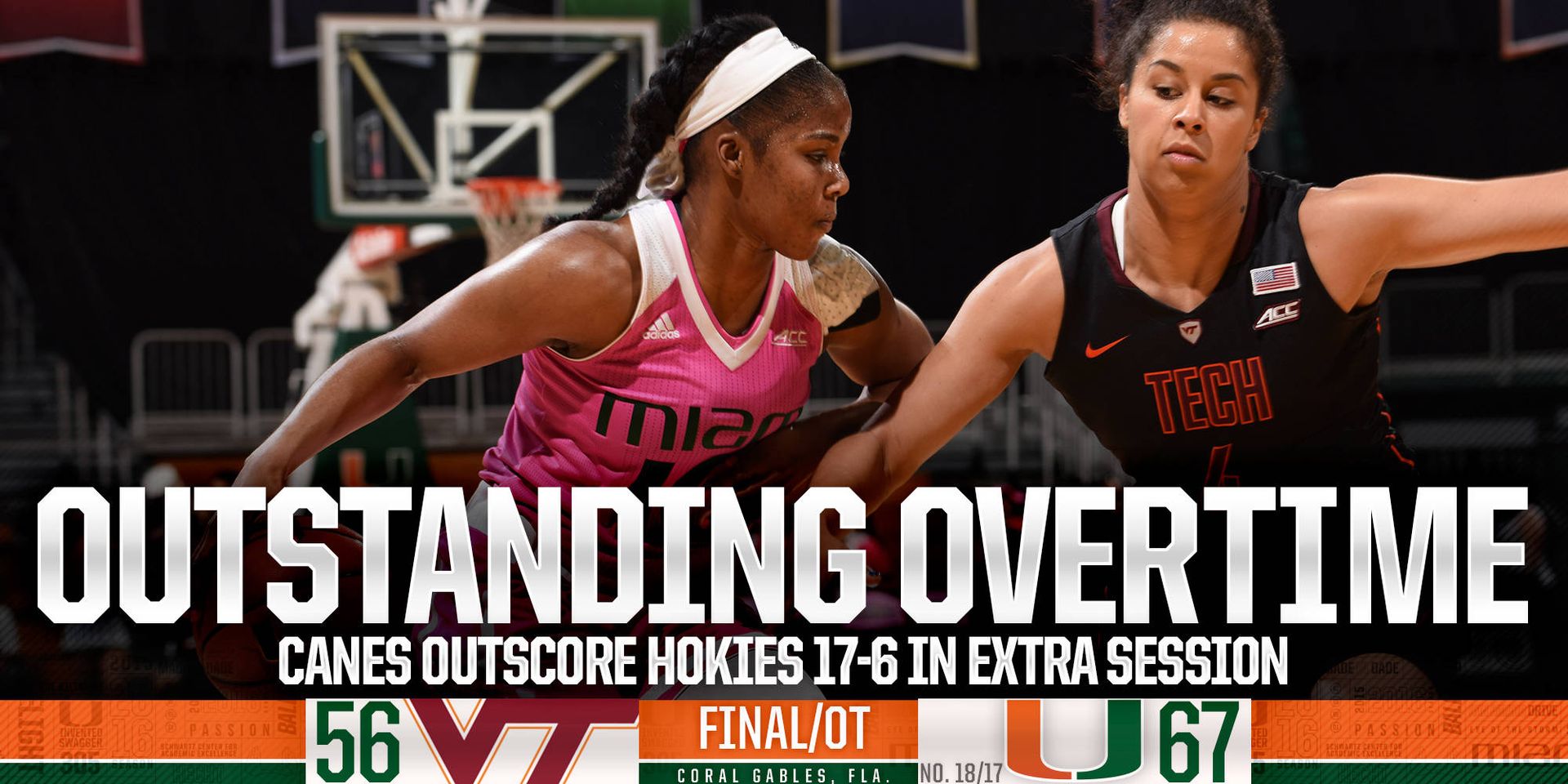 CORAL GABLES, Fla. – Playing its first game at the BankUnited Center in two weeks, the University of Miami women’s basketball team came away with a 67-56 overtime victory against Virginia Tech Sunday evening.

As a part of Sunday being Miami’s Play 4 Kay game, the Hurricanes wore pink jerseys and had an honorary captain, Bianca, from the Austen Everett Foundation. Pink towels and t-shirts were given out and The Heroines Choir, a group of breast cancer survivors, sang the national anthem.

“I told them they’re powerful women because they can inspire someone today who really needs inspiration, just by their effort,” Miami head coach Katie Meier said. “No one is going to care if the shot goes in or out, but they will know that team really plays hard and they fight. I think that fight speech really resonated in overtime, for sure. We were definitely inspired by the survivors who were there tonight.”

In the second period, after the Hokies snapped a scoreless drought of four minutes and 48 seconds with four-straight points, Miami answered in a big way.

Redshirt sophomore guard Nigia Greene hit back-to-back 3-pointers and junior guard Jessica Thomas followed that with a 3-pointer of her own to tie the score. A pair of free throws by freshman forward/center Emese Hof’s with 3:10 left in the first half made it an 11-0 run and a 24-22 lead for the Hurricanes, their first advantage of the game.

Ultimately, Miami would close the half on a 14-2 run over the final six minutes and three seconds to take a 27-24 lead into the locker room.

The Hurricanes came out in the second half with dominant defense and made it seven minutes and 11 seconds, dating back before the intermission, without allowing a point. In both matchups with the Hokies this season, Miami held Virginia Tech scoreless for a span of over six minutes and 50 seconds.

That basket by the Hokies sparked an 11-6 run, countering a 19-2 stretch by the Hurricanes over 10 minutes and six seconds, to make it 38-35 Miami entering the final period.

“Our depth just can be disheartening for other teams,” Meier said of Miami’s strong defensive performance. “So, we’re going to have to just keep playing hard and defending like we’re defending.”

The Hurricanes stretched their lead back to eight, 43-35, on 3-pointer by freshman guard Laura Cornelius with 7:29 to play.

Miami’s edge remained at five with 43 seconds on the clock, but the Hokies closed the game on a 7-2 run, capped by an off-balance runner by freshman guard Chanette Hicks with 2.2 seconds remaining to tie the game and send it to overtime.

Virginia Tech jumped out to a 55-52 lead in the extra session, but from there it was all Hurricanes. Miami outscored the Hokies 15-1 over the final three minutes and 37 seconds of the game, including 13-straight points over the last two minutes and 13 seconds, to seal the win.

In addition to her team-high 15 points, Hof tied with sophomore forward/center Erykah Davenport for the team lead with seven rebounds. Hof, who shot 9-of-11 at the free throw line, had her siblings and mother in the stands, all the way from the Netherlands.

Junior guard Adrienne Motley also scored in double figures for the Hurricanes, finishing with 12 points. Sophomore forward/center Khaila Prather made the first start of her career for Miami and scored the team’s first points. She was one of 10 Hurricanes to tally at least one basket in the victory.

Junior forward Sidney Cook paced Virginia Tech with 17 points and nine rebounds, but the Hurricanes limited her to 1-of-11 shooting (9.1 percent) from the field. Senior forward Hannah Young added 15 points for the Hokies.

The Hurricanes had a 21-9 edge in points off turnovers in the game, as well as a 12-4 advantage in second chance points and a 16-10 lead in assists. Miami limited Virginia Tech to 17-of-55 shooting (30.9 percent) in the victory.

Miami will conclude its 2015-16 home slate Thursday at 7 p.m. when it hosts No. 11/11 Louisville at the BUC on guard Michelle Woods’ senior night.

·         For the first time in 2015-16, Miami’s starting five consisted of Davenport, Motley, Prather, Thomas and Woods. As aforementioned, this marked the first start of Prather’s collegiate career.

·         Miami retired assistant coach Octavia Blue’s jersey before the game. She is the fourth player in program history to receive the honor.

·         Miami held Virginia Tech without a field goal for a stretch of five minutes and 14 seconds during the first half (1:35 of the first period to 6:21 of the second). During that span, the Hurricanes held the Hokies without a point for four minutes and 48 seconds.

·         This is the fifth time in the last seven games the Hurricanes have had a stretch of at least four minutes and 59 seconds without conceding a point. Miami held Virginia Tech without a point for six minutes and 54 seconds in a row in the prior meeting this season.

·         This is the sixth time in the last seven games Miami has allowed 30 points or fewer in the first half.

·         Davenport, who attempted the first 3-pointer of her career, totaled multiple assists in an ACC game for the second time in her career (previous vs. Florida State, 1/24/16).