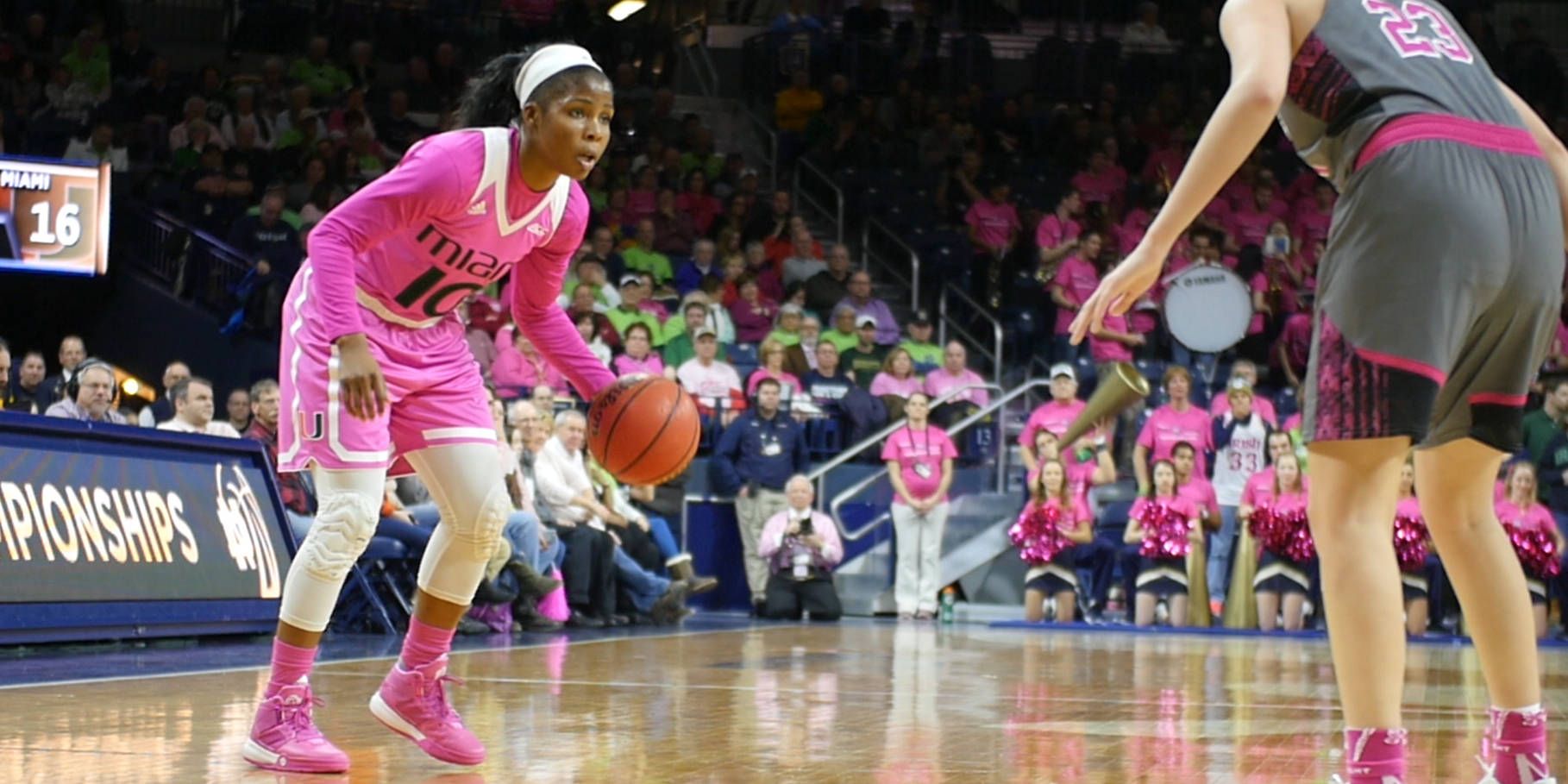 NOTRE DAME, Ind. – The University of Miami women’s basketball game dropped a true road game for just the second time this season Sunday afternoon, as the Hurricanes came up on the short end of a 90-69 decision at third-ranked Notre Dame.

No. 19/17 Miami (21-5, 9-4 ACC) was led by 12 points each from junior guard Jessica Thomas and freshman forward/center Emese Hof, who set a new ACC career high in scoring. Thomas added a game-high five assists in the defeat.

Freshman guard Arike Ogunbowale led all scorers with 18 points for the Fighting Irish, who posted their 25th-consecutive home victory.

“We lost our identity very, very early in the game just by missing some open shots and I’m disappointed in that. We’re not that young,” Miami head coach Katie Meier said. “We only have one senior, but we have veteran experience and we really lost our identity. We lost our grit, we lost our [mindset to] defend. I will say, Notre Dame does that to you because you feel like you’re just chasing the ball around. It gets deflating.”

Notre Dame (24-1, 12-0 ACC) jumped out to an early 13-3 lead, but Miami quickly answered with a 7-2 run to pull within five, 15-10, with 3:44 left in the opening period. The Fighting Irish would go on to take a 26-14 edge through 10 minutes of action despite a then-game-high seven points by Miami redshirt senior guard Michelle Woods.

A strong second quarter surge by Notre Dame gave it a 44-25 edge heading to the locker room. The Fighting Irish shot 9-of-10 from the free throw line in the first 20 minutes of play, while Miami did not have an attempt from the stripe.

Buoyed by a 13-0 run in the third period, the Fighting Irish extended their advantage to 72-40 entering the final quarter.

Miami got great minutes from its reserves in the fourth period and outscored the Fighting Irish 29-18 in the final 10 minutes.

Freshman forward/center Zada Williams scored five points to set a new ACC career best. Redshirt sophomore guard Nigia Greene, making her return to the court after missing the past 14 games due to injury, scored eight points, including knocking down a pair of 3-pointers.

“Gia played fearlessly and that’s hard to do,” Meier said. “I’m really proud of her. I though Zada did some great things on the offensive end and that’s something we can build on.”

Miami forced the Fighting Irish into 23 turnovers in the game, six more than it committed. The Hurricanes also logged seven blocked shots, their second-most of the season.

The Hurricanes now have a midweek bye and will then return to action Sunday afternoon when they host Virginia Tech at 4 p.m. in their Play 4 Kay game at the BankUnited Center in Coral Gables, Fla.

·         For the 14th time this season and the third-consecutive game, Miami’s starting five was Erykah Davenport, Keyona Hayes, Adrienne Motley, Thomas and Woods.

·         The Hurricanes wore new pink jerseys for the contest, as this was Notre Dame’s Play 4 Kay game.

·         Turner is the first player with five-plus blocks against the Hurricanes since both Stasha Carey and Monica Wignot of Pittsburgh did so in the same game on 2/1/15.

·         Motley passed Robin Harmony for sole possession of 13th place on Miami’s all-time scoring list. She has 1,316 points in her career.

·         Emese Hof, who surpassed 200 points as a Hurricane, scored in double digits for the eighth time this season, including the second time in ACC play.

·         In addition, Prather’s six points matched her career best, as did her three field goals made (both previously recorded multiple times, both most recently vs. Milwaukee, 11/27/15). Both marks are new career highs in ACC play.

·         Williams also made multiple field goals in an ACC game for the first time in her career. In addition, she recorded her first two career assists in ACC play, tying her top mark in any game (previous vs. FIU, 12/22/15).