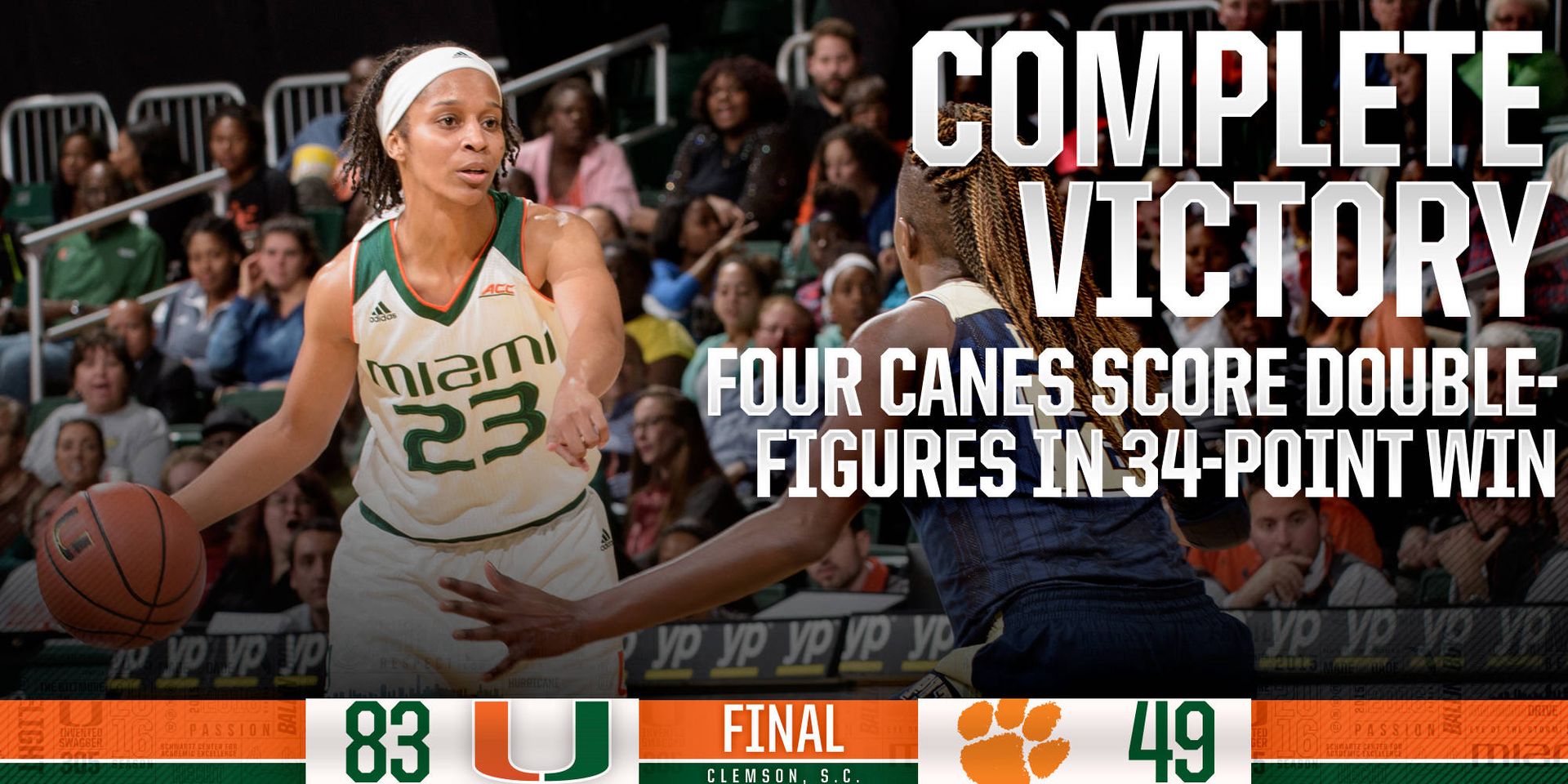 CLEMSON, S.C. – The University of Miami women’s basketball team jumped out to a 26-2 lead at Clemson Sunday evening and never looked back, en route to a 83-49 victory.

Miami (15-2, 3-1 ACC) junior guard Adrienne Motley opened the game with back-to-back 3-pointers in the first minute, immediately setting the tone for the contest, and led all scorers with 18 points in the win.

“Well, we needed to do that,” Miami head coach Katie Meier said of getting a big win on the road. “Our last road trip—I told the team before the game today, we got a lesson then. We don’t need another lesson. So, let’s take care of the ball, which we did beautifully in the first half, and give them a lesson, which hopefully we did.”

After Motley’s game-opening 3-pointers, fellow junior guard Jessica Thomas then scored five-straight points, including a 3-pointer of her own, as Miami jumped out to an 11-0 lead after just two minutes of play.

In the second quarter, Motley again hit consecutive 3-pointers to make it 39-8 with 5:53 left before the intermission. The Hurricanes would go on to take a 47-15 lead into the locker room at halftime after shooting 10-of-15 (66.7 percent) from beyond the arc in the first two periods.

Motley led all scorers with 14 points at the break and the Hurricanes had 23-0 edge in points off turnovers, while forcing 14 giveaways and conceding just three. Miami’s 47 points at the break marked its most in the opening half this season, while its 15 points allowed were its fewest in the first 20 minutes.

“What they did was play very mature, very focused and very unselfish. It was just beautiful basketball,” Meier said the start to the game. “Our assist to field goal percentage was great. We had 12 assists to 15 field goals at halftime. It was our starters. They set the tone. They said, ‘This is how we’re going to play. This is what Miami is known for this year.’ It was beautiful basketball and I think we would have beaten a lot of teams tonight the way we played that first half.”

Thomas opened the second half by connecting on her third 3-pointer of the game and the 100th of her career. Miami stretched its lead to as many as 40 points in the third period and eventually led 69-35 entering the last 10 minutes of action.

Clemson did not cut the deficit any lower than 32 points in the final period and the Hurricanes took the game by 34 points. Miami’s last 30-point ACC victory also came against the Tigers, as Miami topped Clemson by 37 last season.

In addition to Motley, who shot 4-of-6 from 3-point range, three other Hurricanes also posted double digits in the scoring column in the win. Cornelius finished with 17 points, the second-most of her career, and shot 5-of-8 from beyond the arc. Thomas added 13 points to go along with a career-high-tying seven assists, while sophomore forward/center Erykah Davenport had season-high-tying 12 points for the Hurricanes.

“Laura is playing very, very well. In the ACC season she has certainly lifted her game and then Erykah needed a game like this, I think, because she’s been working so hard,” Meier said. “I’m really happy for her because she’s been putting in the time and showing great leadership. So, her coming off the bench makes us really dangerous.”

Sophomore wing Nelly Perry was the lone Tiger to finish with double figures, recording 14 points. Miami forced 26 turnovers and gave the ball away 12 times en route to a 34-7 final edge in points off turnovers. The Hurricanes’ bench also doubled up Clemson’s, 32-16.

The Hurricanes will be back in action Thursday at 7 p.m. when they host Wake Forest at the BankUnited Center in Coral Gables, Fla.

·         Miami’s lead in the all-time series against Clemson moves to 9-6 and the Hurricanes have won six of the past seven meetings.

·         Miami has tallied 80-plus points seven times this season after doing so five times last year. The Hurricanes have scored at least 80 points in five of the past eight games alone.

·         The four points Miami conceded in the first period matched its fewest allowed in a quarter all season (previous in the fourth period vs. Milwaukee, 11/27/15).

·         This was the second-straight game in which Miami did not trail and led for greater than 39 minutes.

·         Additionally, Motley, who reached 450 field goals made as a collegian, is shooting 8-of-10 (80.0 percent) from 3-point range over the past two games. For the second-straight game, she made four 3-pointers to match her career best in an ACC game.

·         Khaila Prather and Davenport each recorded the 50th game played of their careers.

·         Cornelius recorded double figures in scoring for the fourth time in her career.

·         Williams also made multiple free throws in a game for the first time and set a career best with a game-high eight free throw attempts (previous high three, vs. FIU, 12/22/15).