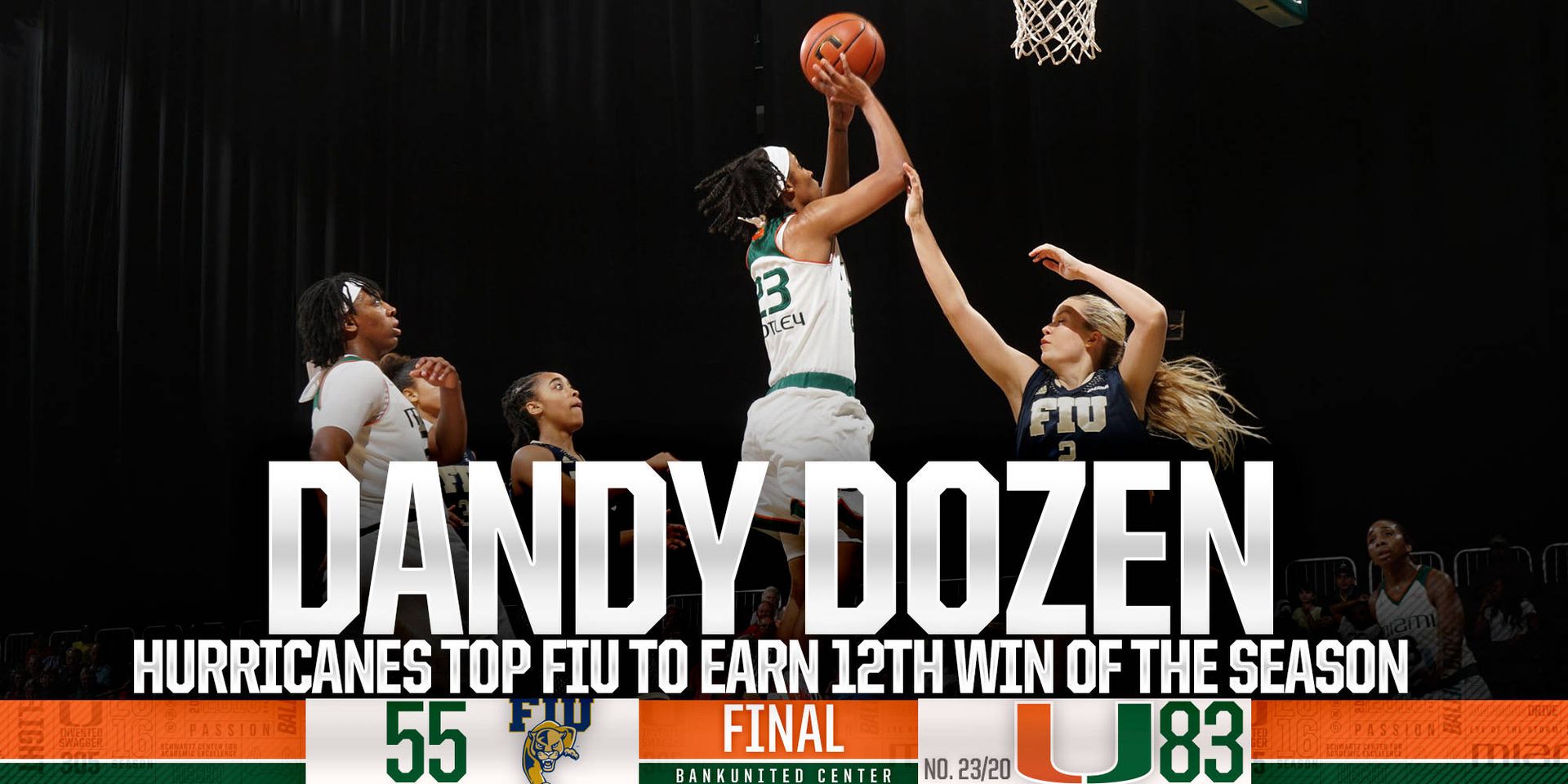 @CanesWBB Storms Past FIU by 28

CORAL GABLES, Fla. – The University of Miami women’s basketball team capped its nonconference slate with a dominant 83-55 victory over FIU Tuesday afternoon at the BankUnited Center.

No. 23/20 Miami (12-1) scored first and never looked back, leading from start to finish. The Hurricanes’ starting guards, junior Adrienne Motley, junior Jessica Thomas and redshirt senior Michelle Woods, combined for 44 points. Motley led the way with 19, Thomas added 15 and Woods logged her first-career double-double with 10 points and a career-high 10 rebounds.

“All three of those starting guards played a lot of minutes of heavy, intense basketball just two and three nights ago,” Miami headcoach Katie Meier said, referring to the team’s game against fourth-ranked Baylor and Indiana. “So, for them to give us those numbers [was very big].”

Freshman forward/center Emese Hof’s opening basket helped Miami build a 9-3 lead in the first three-and-a-half minutes of the contest. The Hurricanes stretched the lead by an additional point the rest of the period and led 23-16 through one quarter.

Freshman forward/center Zada Williams gave Miami a big boost off the bench in the second period, scoring a five of her career-high seven points in the first five minutes of the frame. The Hurricanes stretched their lead to as much as 18 in the quarter. Woods hit a 3-pointer and then Miami forced a backcourt turnover that led to a jump shot by Motley to make it 44-26 with 3:10 left in the half.

Miami would eventually take a 44-31 lead into the intermission. Motley scored 11 points in the opening 20 minutes, while Woods had 10 to go along with six rebounds, helping the Hurricanes take a 25-14 edge over FIU (2-7) at the break.

The Panthers opened the second half on a 10-0 run in the first two-and-a-half minutes to pull within three at 44-41, but Miami quickly answered.

Motley finished a tough basket through contact in the paint, helping spark the Hurricanes to a 15-0 run of their own, extending the lead all the way back to 18, 59-41, with 3:34 on the clock. The stretch included a pair of 3-pointers by junior guard Jessica Thomas and one by freshman guard Laura Cornelius.

“At this point, when they go on that run, the players know they don’t even have to look at me. They know I’m not calling timeout,” Meier said of Miami’s response. “If we’re confused, I’ll call a timeout and fix it. That was just that we just had to play through our legs. It was fatigue. It was great effort from FIU and then on our part I was hoping someone would play defense . . . The leaders took care of it.”

A bucket Motley just before the horn gave the Hurricanes a 68-47 advantage entering the final period of play.

Miami pushed its lead to as much as 29 in the final period. The final 28-point margin of victory tied for the team’s third-largest of the year.

In addition to the starting backcourt, sophomore forward/center Erykah Davenport also scored in double figures, finishing with 11. She helped the Miami bench outscore that of FIU by a margin of 31-3.

“It’s a credit to my staff. The position coaches do a great job,” Meier said of her team’s depth and consistent balanced scoring. “They keep their players within the roles in the system and let them know that they’re valued and they’re very important. This isn’t just an experiment; I believe it’s the secret to the success.”

The Hurricanes did not concede a single second chance point in the game and had 20 of their own. Miami also led 36-12 in points in the paint and 24-8 in points off turnovers.

With nonconference play now in the rearview mirror, the Hurricanes will begin ACC action Dec. 30 when they host NC State at the BankUnited Center at 7 p.m.

To keep up with the latest news on the University of Miami women’s basketball team, follow @CanesWBB.

·         The all-time time series between Miami and FIU is now 34-22 in favor of the Hurricanes. Miami has played and defeated FIU more than any other opponent.

·         In both of Hof’s starts this season she has scored Miami’s first points of the game.

·         Davenport scored in double figures for the fourth time in the last seven games and the fifth time this season. Additionally, she topped 200 career points.