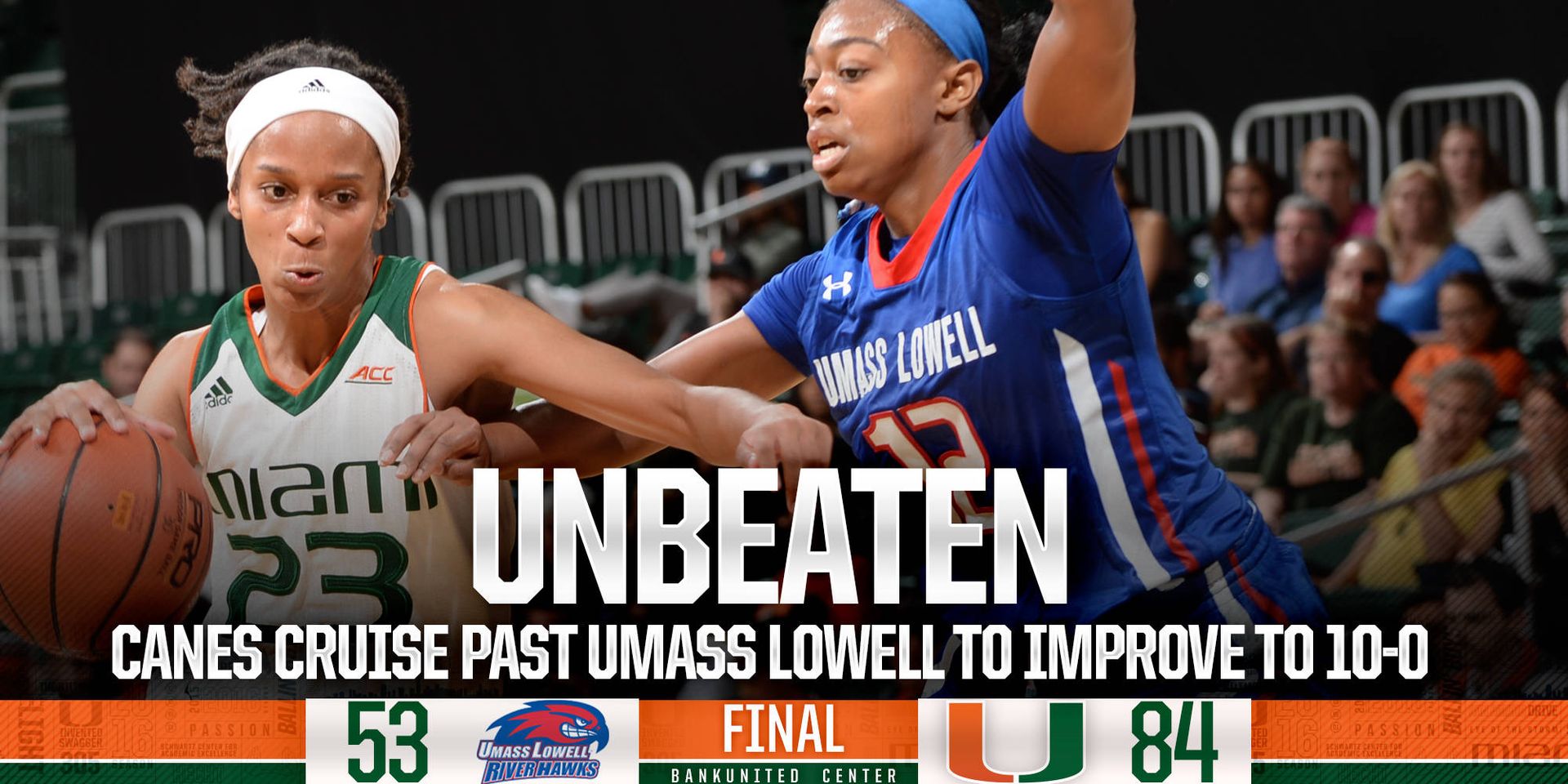 Junior guard Adrienne Motley scored a game-high 18 points on 7-of-10 shooting from the field and for the second-straight game, Miami (10-0) did not trail at any point. The victory capped a stretch of 10 games in 24 days, including five in the last nine, for the Hurricanes.

“It’s our depth, without question. Everybody feels important on this team. Everybody has a job to do and everybody gets rewarded with playing time,” Miami head coach Katie Meier said of the Hurricanes getting through its grueling stretch unbeaten. “We needed it. When anybody plays a little flat, or a little lazy or a little tired, there’s a next woman mentality. They’ll step up. They’re not going to be an exact duplicate of what we lost, but they’re going to be the best version of themselves.”

Miami jumped out to a 6-0 lead on the River Hawks and held a 19-11 edge at the end of the first period. UMass Lowell (1-7) opened the second quarter with back-to-back 3-pointers to cut the deficit two, but then Miami seized control.

The Hurricanes went on a 15-3 run over the next five minutes to go up 34-20 with 4:11 left before the break. Motley and redshirt junior forward Keyona Hayes combined for nine of Miami’s points during the stretch.

When the horn finally sounded to end the period and send the game to halftime, the Hurricanes had closed the session on a 27-9 run and led 46-26. Motley had 13 points on 5-of-7 shooting at the break, plus a game-high five rebounds.

Miami forced 17 turnovers in the opening 20 minutes of the game, while giving it away just three times.

The Hurricanes opened the third period the same way they closed the second, scoring 15 of the first 18 points, including 13 in a row, to make it 61-29 with 6:18 left in the quarter. Once again it was Motley and Hayes leading the charge, teaming up for nine of the 15. When the third period came to a conclusion, Miami led 66-39.

In the final frame, Miami extended its lead to as much as 36 points en route to the eventual 31-point victory.

The Hurricanes, who led for 39 minutes and 20 seconds, finished the game with a 44-14 edge in points in the paint.

“I thought we hit the offensive glass very hard and so did UMass Lowell,” Meier said. “I thought Khaila in particular, and ‘E’ [Davenport], were just running the floor, hammering the glass. We can go inside when we need a bucket and that’s nice. It’s a luxury we haven’t had as much in the past couple years that we’re really glad to have this year.”

Miami will now have 12 days off in a row. The Hurricanes’ next game is Dec. 18 at 7 p.m. against No. 4/4 Baylor in Winter Park, Fla. as a part of the Florida Sunshine Classic. The team will then face Indiana the next night at 7:15 p.m.

To stay updated on the University of Miami women’s basketball team during the 2015-16 season, follow @CanesWBB.

·         This was the first-ever meeting between Miami and UMass Lowell.

·         This marked the second-consecutive game Miami has held the lead for over 39 minutes of play and never trailed at any point.

·         The Hurricanes entered the day as one of just 20 remaining unbeaten teams in Division I and the only one in the ACC.

·         All 11 eligible Hurricanes scored for the fourth time this season and each of them had at least one made field goal for the third time.

·         The Hurricanes had over twice as many assists as the River Hawks, finishing with a 22-10 advantage. Additionally, Miami forced 26 turnovers and committed just eight.

·         Davenport posted 10-plus points for the third time in the last four games after doing so three times in the first 39 appearances of her career.

·         Hof recorded double-figure points for the fifth time in her career, with all five of those outings coming in the last seven games.

·         Prather also had four free throw attempts for the second game in a row after not attempting four in any of the first seven games of the season.

·         Cornelius logged multiple steals in a game for the first time as a Hurricane.

·         Cornelius also tied her season highs in rebounds (four) and assists (five). She previously recorded four rebounds multiple times, most recently vs. Old Dominion (11/17/15), and her five assists also came in that game.