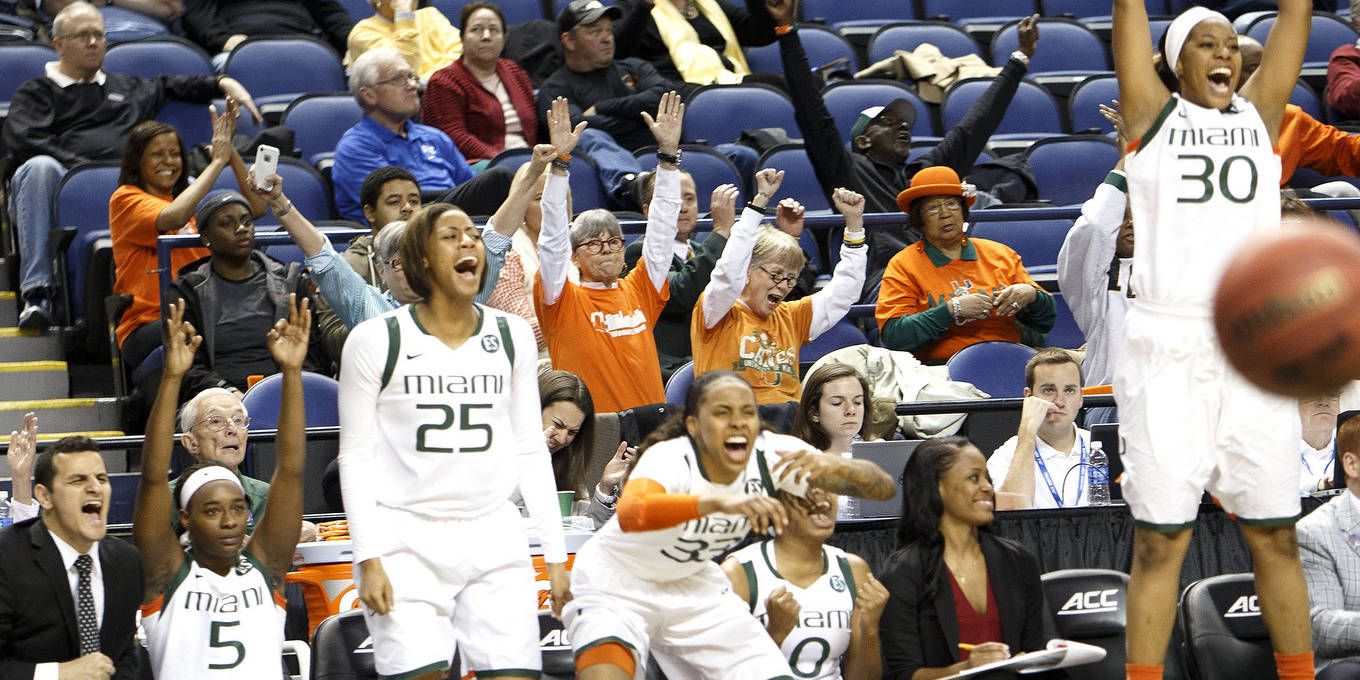 GREENSBORO, N.C. – After receiving a first round bye at the ACC Tournament, the University of Miami came out in style in round two, defeating Virginia by double digits to advance to the quarterfinals.

“We talked about [how] there’s a difference between confidence and faith, and confidence just has the patience to it, and that’s what [it] was at the beginning of the game, we were confident but we didn’t have faith,” Miami head coach Katie Meier said. “ . . . And then I think we found our patience and executed our sets and simplified the game plan and gave the guards a little bit more power to make the calls that they believed in, that they had faith in.”

The first half was a back and forth affair, as neither team could gain much of an advantage. Virginia (17-13, 7-9 ACC) never led by more than two, while the Hurricanes’ largest lead was four points.

Miami shot 15-of-30 (50 percent) from the field in the opening session, while limiting the Cavaliers to 12-of-32 (37.5 percent) shooting from the floor. The Hurricanes also led 10-3 in bench points at the break, as senior forward Necole Sterling provided a huge spark for the Hurricanes.

Sterling shot 4-of-6 and hit a pair of threes to lead all scorers with 10 points at the intermission. Senior guard Suriya McGuire and Motley both had seven points in the first 20 minutes and each connected on a three-pointer.

The seesaw action continued early in the second frame and Virginia freshman Mikayla Venson hit a three-pointer to put Virginia up by one, 40-39, with 13:28 left. Then the Miami defense took over.

The Hurricanes held the Cavaliers without a point for six minutes and also limited Virginia to one make over a stretch of 14 shots. Miami used its defensive intensity to go on a 10-0 run and take a 49-40 edge with 7:43 remaining.

“I thought Nigia Greene made huge hustle plays for us and some finishes right there that were tough and played with courage and she’s been an inspiration for us,” Meier said of the run. “The whole team sort of rallies around her when she makes plays like that.”

Even when Virginia scored 15 seconds later to end the run, sophomore guard Jessica Thomas countered with a three-pointer to give Miami its first double figure lead of the game, 52-42, with exactly 7:00 on the clock.

Once the Miami lead reached double digits, Virginia was unable to respond and Miami continued on for a 62-52 victory.

Sterling finished with 13 points on 5-of-8 (62.5 percent) shooting, while her classmates came up big as well. Redshirt senior Jassany Williams had eight points, tied for the game high with eight rebounds and led all players with five blocks, while McGuire had nine points and six rebounds in the win.

“My seniors, I got a little emotional in the locker room right now because their senior night didn’t go the way any of us wanted it to go, but in our postgame senior celebration, just beautiful, powerful things were said,” Meier said. “And so I told them that this was their senior night because I don’t think the three of them collectively have played their guts out like they did tonight. So this is their senior night.”

The Hurricanes will take on second-ranked and top-seeded Notre Dame Friday at 2:00 p.m. in the quarterfinals of the ACC Tournament. The Fighting Irish are 34-1 in ACC regular season and ACC Tournament games since joining the conference last season, with the lone loss coming to Miami this year.