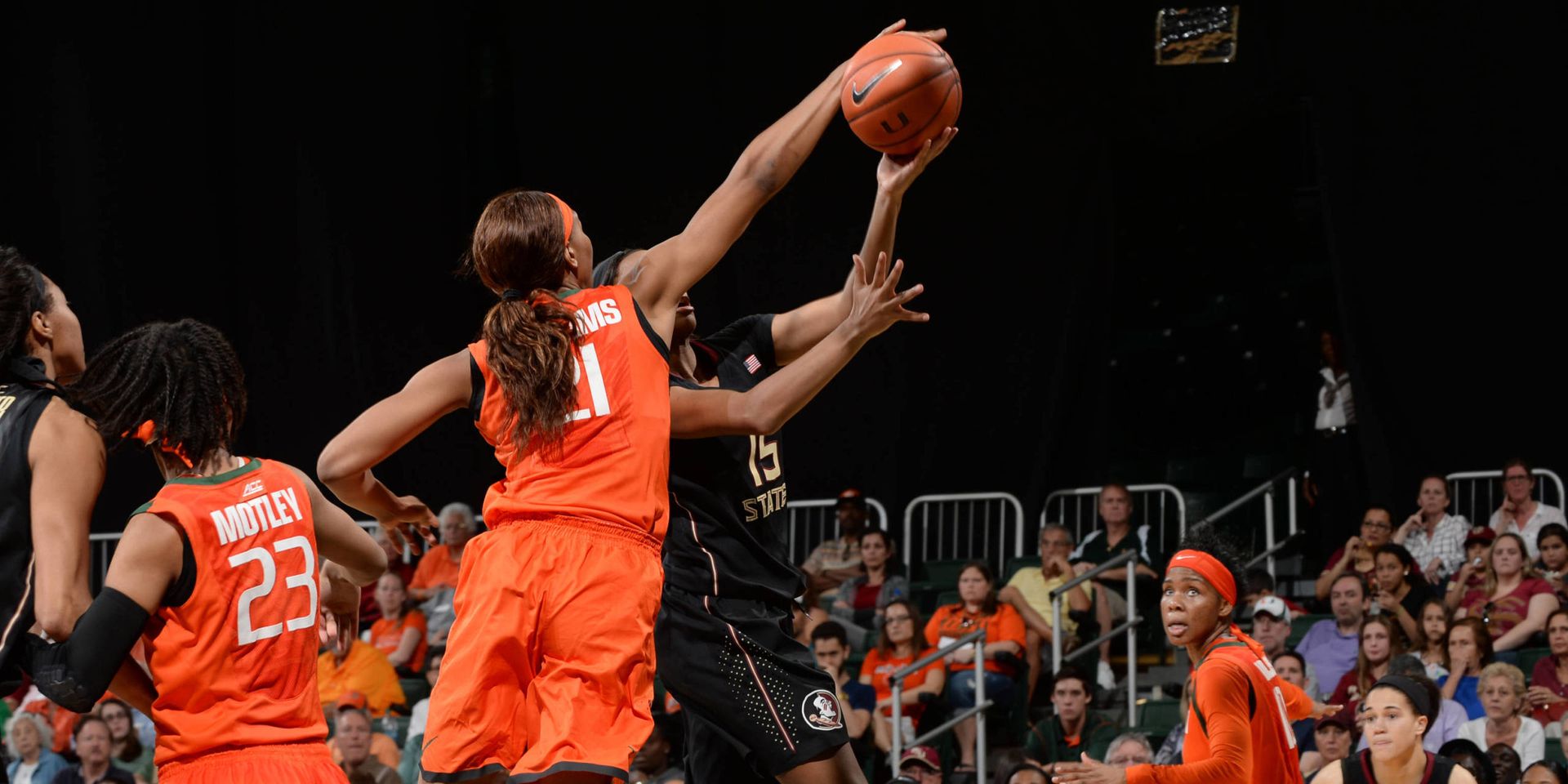 CORAL GABLES, Fla. – The University of Miami fell to No. 9/8 Florida State in its last game of the regular season Sunday at the BankUnited Center.

The Seminoles came out hot from the start and picked up a 69-55 victory despite a game-high 20 points by Adrienne Motley, including 16 in the second half as part of a rally by the Hurricanes.

“We got to rest up tomorrow because we played our guts out today,” Miami head coach Katie Meier said. “That deficit at halftime was something that is daunting and to come back and to cut it and get ourselves in a position to make that a competitive game was a heck of a lot of effort. So, we’ll rest up on Monday and then we’ll get ready for Virginia [in the ACC Tournament].”

The Seminoles’ hot shooting throughout the session allowed them to increase their lead to 38-22 at the intermission. Florida State went 15-of-32 (46.9 percent) from the floor in the opening 20 minutes.

Miami kept its foot on the gas and turned its burst into an 18-5 run, capped by a three-pointer by Sterling. The charge sliced the FSU lead down to nine, 54-45, with 7:20 to go.

“I thought it was our length and our energy and we just took some chances and I believe the lineup was several freshmen too,” Meier said of what she saw during the run. “Nigia Greene I know was the spark and Khaila Prather was doing some amazing things. You have to play a very special basketball to beat a team this good and in that moment we were playing very special.”

The Hurricanes outscored Florida State in the second half, but were unable to get closer than nine and fell by a final score of 69-55.

The Davie, Fla. native surpassed 200 blocks in her career and now has 123 in her two years as a Hurricane, fourth most in program history. Her 66 blocks this season rank second on the single season list.

Williams, Sterling and guard Suriya McGuire were honored before the game as a as a part of Miami’s senior day festivities.

“It’s been amazing because their journeys here are just all so different. I’ve never had a senior class with such a diverse journey,” Meier said of the trio. “We get Ray out of Minnesota and then Jazz we lose [as a high school recruit] and we get her back and then Necole we get her via/via two schools. So the diversity of them and what they bring to the table [is amazing]. They’re three very, very special young ladies [with] bright futures ahead of them.”

Miami will be the eighth seed in the upcoming ACC Tournament and will have a first round bye before facing ninth-seeded Virginia Thursday, March 5 at 2:00 p.m. in Greensboro, N.C. The game will be televised by RSN affiliates.