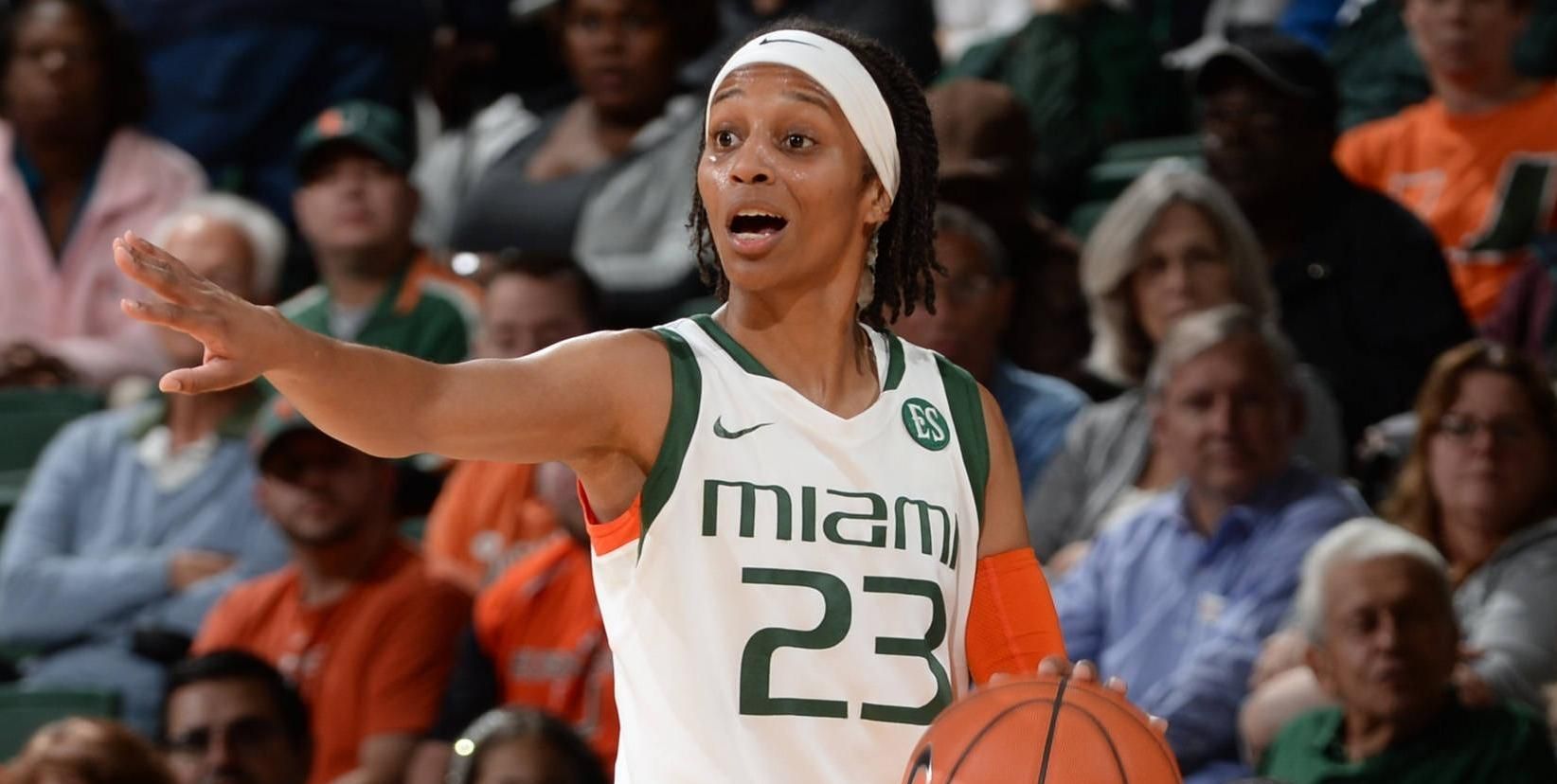 CORAL GABLES, Fla. – The story of the University of Miami’s season has been defense—intense, ferocious defense.

The Hurricanes’ dominant performance in the first half against Virginia Tech Thursday night at the BankUnited Center was a tremendous display of exactly what they are capable of.

Miami put on a defensive clinic in the opening 20 minutes of a 42-39 win over the Hokies, holding them without a point for the final 11:40 of the session.

“I think we played everyone in the first half, and so when we closed out the first half I think we were fresher, we had fresher legs,” Miami head coach Katie Meier said of the long stretch without a Virginia Tech basket “. . . Good minutes off the bench really helped our defensive energy to end the half. So, that was huge for us.”

In the first frame, Miami held Virginia Tech to 4-of-29 (13.8 percent) shooting from the field, including 0-of-12 from three-point range. The Hurricanes forced the Hokies into 12 first half turnovers.

Miami (16-6, 6-3 ACC) limited Virginia Tech to a total of eight points in the first session. It was both in the paint and on the perimeter that Miami made its mark defensively, showing the type of strong defensive play that has been a staple of this team since game one.

“Suriya McGuire was everywhere, I thought she had incredible energy when we put her in the game,” Meier said of the run to end the first half. “We hit a couple shots, it got a little excited, then were able to add some of our presses and we turned them over a little bit during that run.”

The Virginia Tech (10-13, 1-9 ACC) scoreless streak finally ended early in the second half after Miami held the Hokies without a point for over 12 minutes.

The Hokies managed to tie the score twice in the second half, but the Hurricanes did not let them take the lead at any point.

A three-point play by Adrienne Motley gave the Hurricanes the lead for good with 2:44 remaining.

Redshirt senior forward Jassany Williams and freshman forwards Erykah Davenport and Khaila Prather provided quality sparks of energy for the Hurricanes around the rim throughout the game.

The 39 points were also the fewest that the Hokies have scored this season and their six assists equaled their 2014-15 low.

In the victory, Miami showed the ability to win against an ACC opponent in a game where its offense was not fully clicking.

“That game would have gone either way,” Meier said. “We hung in there and we kept battling on the defensive end.”

The win is Miami’s second over Virginia Tech this season and the Hurricanes held the Hokies to 45 or fewer points in both contests.

Sophomore guard Vanessa Panousis paced the Hokies with 12 points, but Miami limited her to 4-of-19 (21.1 percent) shooting. Freshman guard Rachel Camp, Virginia Tech’s leading scorer, was held without a point for the first time all season.

The Hurricanes will be back in action Sunday, Feb. 8 at 2:00 p.m. against Florida State at the Donald L. Tucker Civic Center in Tallahassee, Fla.