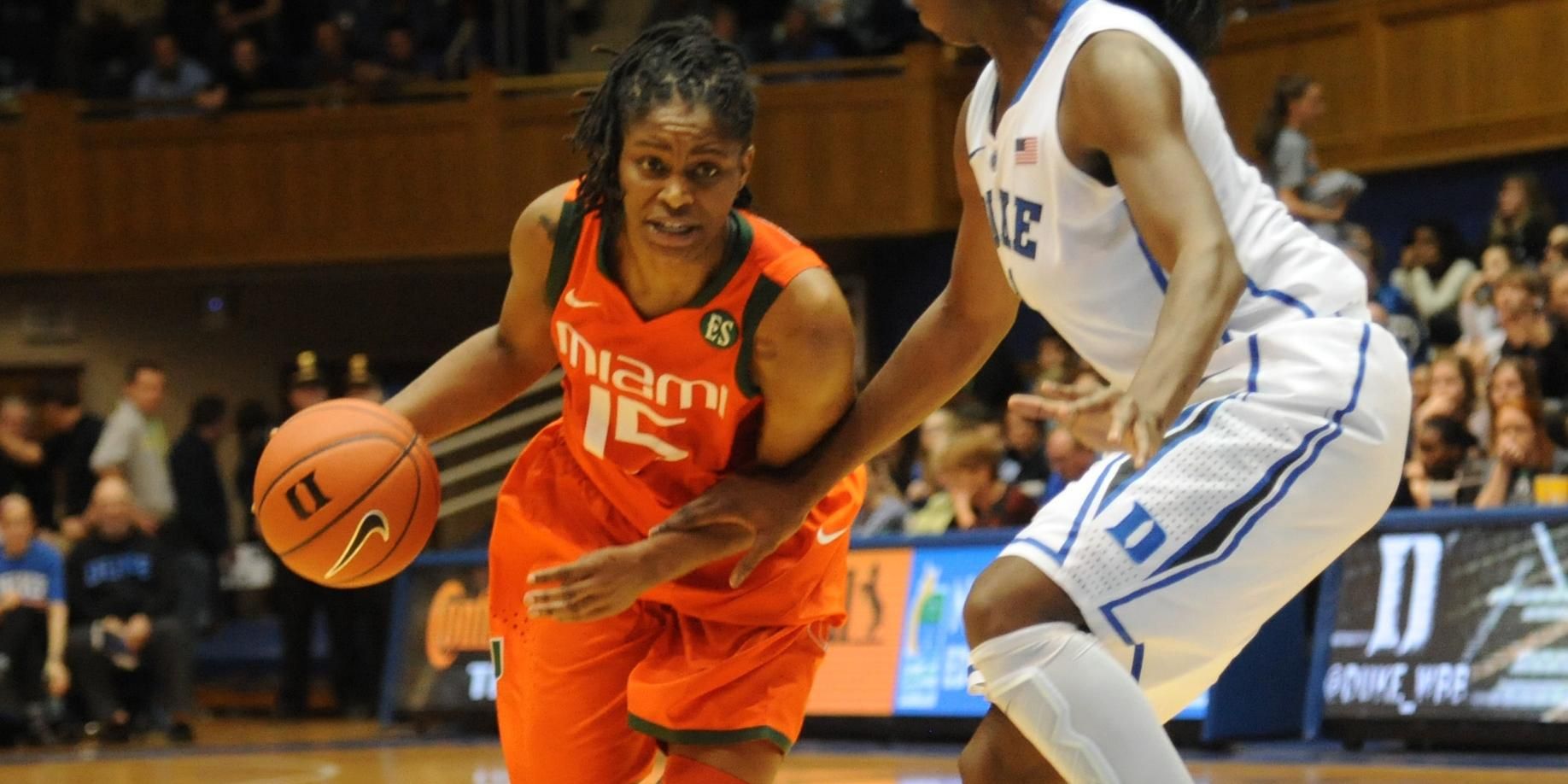 DURHAM, N.C. – The University of Miami played its second ACC road game of the season Sunday afternoon against No. 16/14 Duke at Cameron Indoor Stadium.

The Hurricanes had a strong first half against head coach Katie Meier’s alma mater, but ultimately came up short in front of a loud Duke crowd. The Blue Devils won by a final score of 68-53.

“Give credit to them on a great defensive game plan and understanding what makes our team tick and making sure it didn’t happen for us tonight,” Meier said. “They did a great job; they just cut off our lifelines.”

The score was tied four times in the first half and the lead changed hands six times in the opening 20 minutes. The Hurricanes’ strong play before the break came in large part from their tenacious defense, a staple of the team all season.

Miami (14-4, 4-1 ACC) forced Duke into 10 turnovers and committed just one of its own before entering the locker room.

The story on the offensive end for Miami in the first half was senior forward Necole Sterling, making her third consecutive start. The Los Angeles native was connected on four three-pointers in the first 14 minutes, matching her career high for a game

The Hurricanes led 25-24 with 2:14 left in the first half after a three-pointer by sophomore guard Jessica Thomas, but Duke closed on a 6-0 run to take a narrow 30-25 lead at halftime.

Sterling led all scorers at the break with 12 points, while Jessica Thomas had six as the teams entered the locker rooms. Freshman forward Erykah Davenport provided quality play down low off the bench in the opening session, grabbing a team-high four rebounds.

“[Jassany Williams] was out [due to foul trouble], she probably only played about five minutes of the first half, so second half we wanted to come out and execute our game plan better,” Necole Sterling said. “I thought we were in good spirits, at half time everyone was talking, and knew what changes we needed to make before coach came in. So I thought the second half was going to go a lot better, but the first half we weathered the storm which we usually do.”

Duke (13-5, 4-1 ACC) opened the second half on a 10-2 run, but the Hurricanes would not relent and the team played nearly even basketball the rest of the way.

Redshirt freshman guard Nigia Greene made a three-pointer after the opening Duke run to give the Miami players, as well as the nice turnout of Hurricane supporters, a bit of a spark.

Miami’s full court pressure continued to wreak havoc and Sterling continued her quality shooting, but the Blue Devils were able to create some looks due to their height down low and that was enough.

Despite Miami’s best efforts, including a Duke held serve on its home court for the 68-53 win.

Necole Sterling led Miami in scoring for the second consecutive game, posting 17 points and connecting on a career-high five three-pointers. She also matched her season high with six rebounds.

Erykah Davenport played a career-high 24 minutes and finished with a team-high seven rebounds, good for a new career best.

For Duke, senior center/forward Elizabeth Williams showed why she is already a three-time All-American, finishing with game highs in points and rebounds, with 24 and 11 respectively. Freshman forward/guard Azurá Stevens added 20 for the Blue Devils.

The Hurricanes will now return home to Coral Gables, Fla. to face the Virginia Cavaliers Wednesday, Jan. 21 at 7:00 p.m.