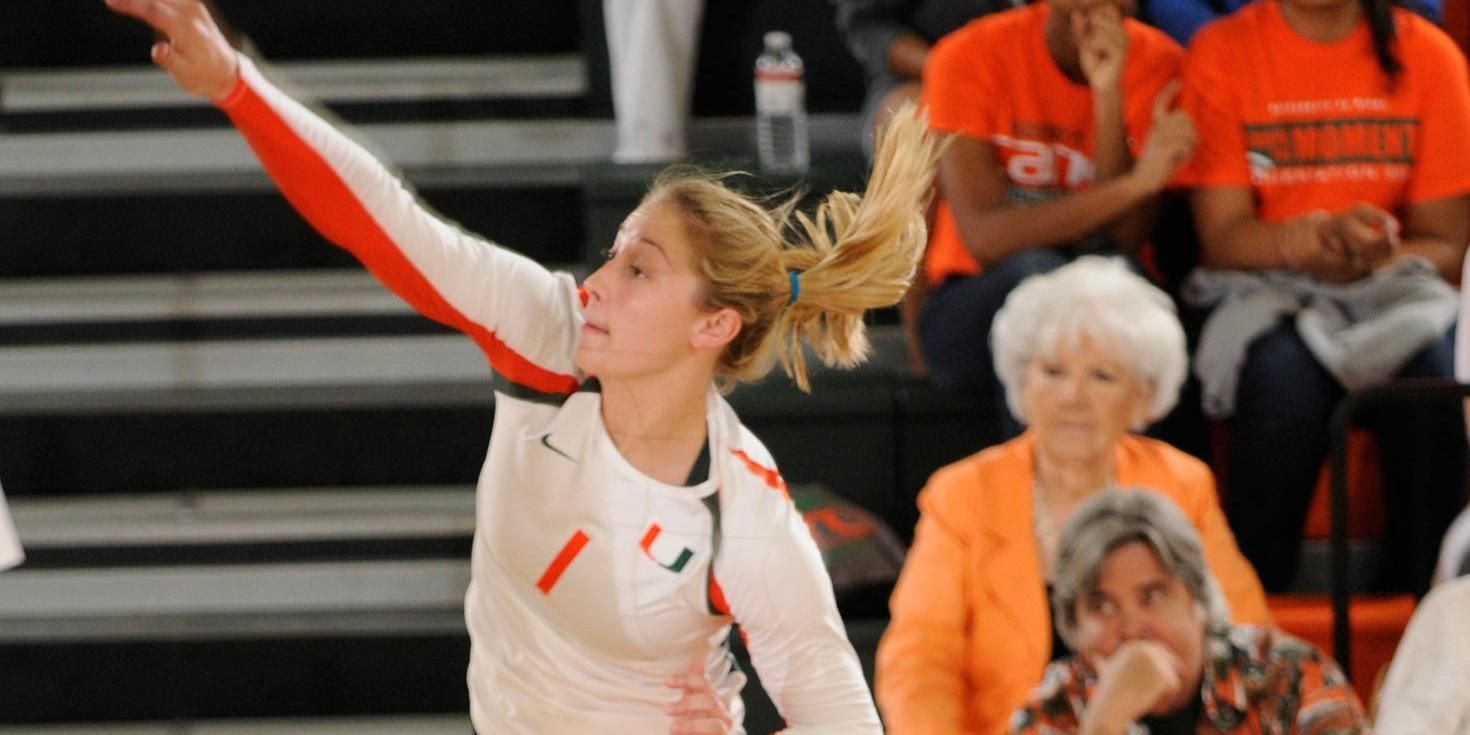 “We knew it was going to be close from the start,” Gandara said. “They’re a good team, but we were ready for battle. We just focused on staying in our system and playing the way we wanted to play. It’s a great win for us.”

Leaf was active early for the Canes, tallying 10 kills, two blocks and an ace before the intermission. Johnson also got off to a strong start, adding eight kills, five digs and four blocks that helped Miami head into the break tied 1-1.

“We definitely needed this,” Leaf said. “It gets us some momentum for these next games. They’re a really good team and they have some very good players. This builds our confidence and helps us keep going forward.”

The duo continued their strong performances after the break with Leaf finishing with a career-high 25 kills. The junior outside hitter also tallied six digs, two blocks and a pair of aces against the Tar Heels.

“We want to get everybody involved and run our system,” Gandara said. “But if there is somebody like Savanah who is playing well and has a good matchup, you have to take advantage of it. She played the way we want her to play all the time and how she wants to play, too. She was doing things that she has been working on and it’s good to see her doing it on game day.”

Johnson finished with 12 kills and 12 digs to record her eighth double-double of the year. The senior right side also made history, picking up her 1,000th career kill with a big hit in the deciding fifth set.

“She is a steady player for us,” Gandara said. “We need her to do a lot of things. She digs, attacks, passes, serves and blocks. She faces tough matchups all the time and still succeeds. It’s awesome. She’s had a long career here and played a lot of matches. We hope she has a couple more in her.”

Johnson joins two-time AVCA All-American Lane Carico as the only two players in Miami history to reach 1,000 kills and 1,000 digs in their career.

“It’s obviously a great honor,” Johnson said. “I looked up to Lane playing here. She is a phenomenal player. My team really helped me achieve this goal and I am thankful for that.”

Several other Canes made key contributions in Sunday’s victory. Sophomore Misty Ma’a tallied 12 kills and eight digs. Junior middle blockers Emani Sims and Alexis Mourning were also active at the net. Mourning finished with a pair of kills and seven blocks, while Sims had six kills and a team-high eight blocks.

“It was a match where we were able to stay in the gameplan and force them to make changes,” Gandara said. “They changed personnel and tactics and we just kept getting better within that gameplan”.

“It’s a big win for us,” Johnson said. “We had our losing streak for a little so to come back and get a 2-0 weekend, especially finishing it against a ranked team, is huge for us.”

The Canes hit the road for the final time in the 2013 regular season, traveling to Virginia for a pair of conference matches.  Miami faces Virginia Tech at 7 p.m. on Nov. 8 and will take on the UVA Cavaliers at 7 p.m. on Nov. 9 to wrap up their last trip away from the Knight Sports Complex.